Predicted Real Madrid lineup against Espanyol: Kroos to return; Rodrygo in for Hazard

Toni Kroos and Rodrygo Goes are in line to return while Eden Hazard will drop to the bench when Real Madrid take on Espanyol on Sunday.

Real Madrid will be eager to bounce back to winning ways following a humbling defeat to Sheriff Tiraspol when they lock horns with Espanyol at the RCDE Stadium on Sunday evening. And Carlo Ancelotti does not have any fresh injury concern to deal with ahead of his side’s latest fixture.

So, the Real Madrid manager will continue to be bereft of the services of four first-team players, with the major absentee being Dani Carvajal, who is recovering from a calf injury. Marcelo (leg), Dani Ceballos (ankle) and Gareth Bale (hamstring) are the other players sidelined while Ferland Mendy is not a part of the travelling squad, with Ancelotti continuing to ease him back in.

However, the good news is that Toni Kroos is finally set to make his first start of the season after appearing off the bench against Sheriff. And during his pre-match press conference, Ancelotti did confirm the same while expressing his delight over his return.

The Real Madrid boss said, “We’re pleased to have him back. He needed to recover properly. He’ll start tomorrow’s game. He brings his quality and experience. Everyone knows what he offers the team.” Ancelotti then proceeded to provide an update on the players who are not part of the squad to face Espanyol.

“Mendy is doing quite well. He’s started training with the squad. But we haven’t increased the intensity too much. We want to take advantage of the international break to work him harder and get him back playing. I think he’ll be able to play his first match after the international break. Carvajal and Marcelo are also at the same point. We hope they’ll be back after the break.”

In Carvajal’s absence, Lucas Vazquez ought to start as the right-back, with Nacho moving out to the left side of the Real Madrid defence after being deployed on the right flank in the midweek fixture. As for the central defensive partnership, there is no looking past Eder Militao and David Alaba while Thibaut Courtois picks himself in goal.

Up ahead in midfield, Kroos ought to have Casemiro and Federico Valverde as his partners, with Luka Modric and Eduardo Camavinga being options off the bench. As for the attacking unit, Eden Hazard could drop down to the bench, with Ancelotti speaking about the Belgian attacker as well in his presser.

“He’s lacking a bit of consistency. I think that he’s doing some things as he did before. He does well on one-on-one situations and is very good at getting past his man. He had several shots the other night against Sheriff. He needs to be more involved in the games and will gradually have the opportunity to show the considerable quality that he has.” 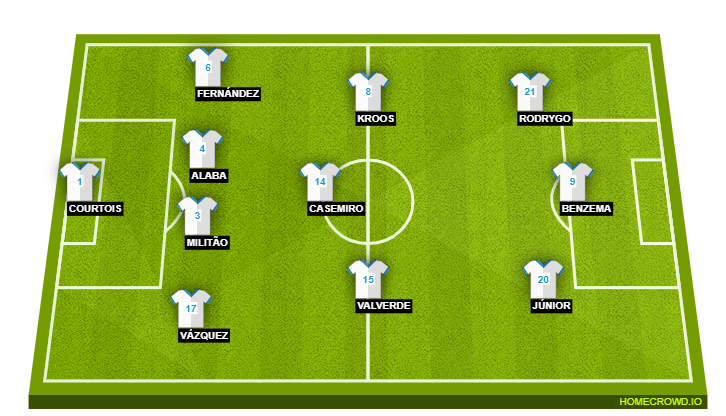 Taking Hazard’s place in the final third ought to be Rodrygo Goes, with Vinicius Jr. being the other wide man for Real Madrid. Finally, Karim Benzema will lead the line for the visitors against Espanyol.