Axel Tuanzebe will replace Harry Maguire while Marcus Rashford is a doubt as Manchester United prepare for the clash with Granada.

Manchester United will be looking to progress to the semi-finals of the UEFA Europa League when they play hosts to Granada at Old Trafford in the quarter-final second leg on Thursday night. And, Ole Gunnar Solskjaer has a number of key first-team players either unavailable or regarded as a major doubt.

The likes of Harry Maguire, Luke Shaw and Scott McTominay are all suspended for the second leg due to an accumulation of bookings. In addition, Eric Bailly is unavailable after recently testing positive for COVID-19, while Phil Jones is still making his way back from an injury. Anthony Martial, though, is a long-term absentee due to a knee injury.

In addition, Marcus Rashford is doubtful for the visit of Granada and in his pre-match presser, Solskjaer spoke about the precarious position he has been put in. The Manchester United boss said, “It’s never a positive thing to not have every player available. But we’ve got players ready to deputise and come into the team. I always pick a team to win a game. There will be a few changes; some of them are forced and some of them are maybe rotation.”

The absence of Maguire and Bailly means Solskjaer has just two recognised centre-backs at his disposal in Victor Lindelof and Axel Tuanzebe. And, during his press conference, Solskjaer put his faith in Tuanzebe, saying, “Axel has always been a very positive boy and hardworking.”

“Victor and Harry have played, they’ve formed a very good partnership. Eric’s come in and played really well when he’s played so his [Axel’s] chances have been limited, but he’s been training well and he’s ready for this opportunity.”

Tuanzebe should indeed pair up with Lindelof at the heart of the Manchester United defence, which will provide cover to David de Gea, who replaces Dean Henderson in goal. As for the two full-backs, Aaron Wan-Bissaka and Alex Telles pick themselves out wide. 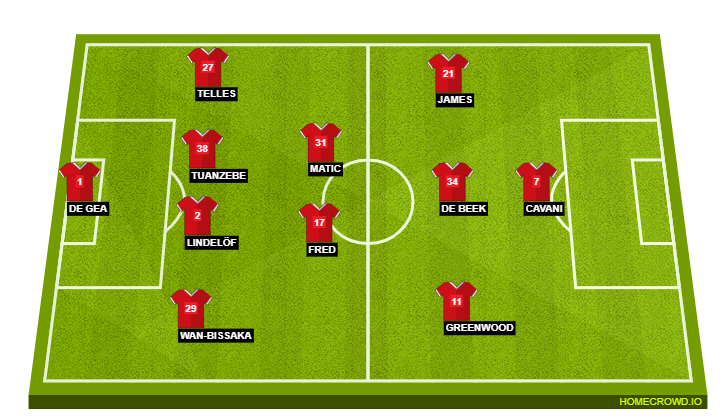 Up ahead in midfield, McTominay’s suspension means Fred and Nemanja Matic pick themselves in the double pivot, with Paul Pogba likely to be given a breather. Bruno Fernandes could get a bit of a rest as well, with Donny van de Beek set to be handed a rare start. Meanwhile, Solskjaer spoke about Rashford during an interview with the Manchester United media.

“Yes Marcus didn’t train this morning so I’ll have to give him as much time as possible, his foot is still a little bit sore, but fingers crossed he is available tomorrow.”

Judging by Solskjaer’s comments, it looks likely that Rashford will miss out against Granada, with Daniel James and Mason Greenwood expected to be the two wide men. Finally, Edinson Cavani, who was excellent against Tottenham Hotspur this past weekend, will lead the line for Manchester United, with no other recognised options at Solskjaer’s disposal.