The English Midweek Preview: How Will 2011 Shape Up The Table?

Home » posts » The English Midweek Preview: How Will 2011 Shape Up The Table?

It’s not been a smooth run for Manchester United to hold onto their top spot since they made their way to the top. An unlucky draw against Birmingham City was followed by an fortuitous win against West Bromwich Albion. Equal on points with the blue half of Manchester, albeit with 2 games in hand, the Red Devils certainly need to work hard to open up the gap at the top of the table and Stoke City is not always an easy team to come up against.

Tony Pulis agrees that his side has had an ambivalent campaign so far but with Stoke looking pretty at the eighth spot, he realizes the impetus that a win at Old Trafford will provide his team and the Potters will be looking to bag all three points.

Ferguson is not really facing any grave injury concerns save for Valencia and Hargreaves’ continued omission. Javier Hernandez came on as a super sub in the game against West Brom,  while Gabriel Obertan had a not so good game on the wing. and so the Gaffer  could bring in the experienced Ryan Giggs to make a difference. Ji-Sung Park is away on international duty and hence will be unavailable for the game. Wayne Rooney, who limped off the pitch last Saturday, should be ready for the Stoke match according to the Gaffer. Nani has also recovered well and would start afresh from the injury lay-off.

Manchester United are near invincible at home and there is no doubt that they will pile up pressure right from the beginning. Shawcross and Higginbotham have to be really sharp in judging the opponents’ movements, since United is brilliant in playing the passing game with immense impeccability.

Old Trafford is a fortress to many

Stoke City will travel to Old Trafford high on confidence after beginning their New Year with a well deserved win against Everton. There aren’t any injury threats to the Potters as they travel to the Theatre of Dreams and so we can expect a full strength squad to be taking the pitch.

It will take a little more planning than Rory Delap’s throw-ins to win against Manchester United. With Kenwyne Jones now back in form for the club, service becomes a vital issue and so Matthew Etherington will be the man the Devils’ defense should watch out for.

Wolves have scored 9 out of their 18 league points with 3 wins from their last 6 games, but still find themselves involved in the relegation battle. Hence every result from here will influence their stay in top flight football next season. Mick McCarthy’s team showed good resilience against Liverpool a couple of games ago and he will be looking forward to see that same spirit emanate from his team as they face defending champions Chelsea at home.

Chelsea are currently featuring in their worst premier league campaign since oil magnate Roman Abramovich took over (they have currently won just one of their past 6 encounters) but Carlo Ancelotti is a tactician good enough not to be ruled out of the race. The game at Molineux is Chelsea’s best chance to bring back the killer instinct and get serious about the title race. A loss here will have more repercussions in terms of affected mentality than on the nature of Chelsea’s game.

Will Carlo prove to be the
right man for Chelsea after all?

Wolves have an injury free team for this midweek fixture. Stephen Ward will be hoping to put up another good performance as he did against the Reds. However, Wolves are short of quality in the attack department as they venture out into the market for more options. Right now, the team is going to perform best when all the players unite and believe in themselves. Guess it is going back to basics for McCarthy’s men.

The Blues on the other hand, really need to focus on their game if they are to catch up with the league leaders. They are already 6 points off the top with 20 games already played and if Carlo is to seriously believe in challenging for the title then Chelsea need to get their act together before it is too late. Alex continues to sit out with injury, but Ivanovic  will return after serving the suspension. Ramires is yet to settle into the English game, but considering the injury to Mikel, he is expected to start again.

It is not rocket science for one to understand the gravity of the intensity surrounding this game. Manchester City have indeed come out of the blue to make a mark as a serious title contender this season and with more than half the season over, the fact that they are on the 2nd spot, differing only on goal difference with Manchester United, has clearly sent out a warning to the rest of the clubs. Mancini has managed to shape up a highly costly team on paper and pitch and a win at Emirates will surely help their cause.

Arsenal have been fairly consistent amongst other teams so far this season and with the Fabregas’ dip in form, Samir Nasri has boldly risen to the challenge of taking over matters at North London and instilled the hope of winning the title in Wenger again. Arsenal cannot afford to panic at this point as has happened before. The Gunners have a good chance of being crowned champions of England this season so Wenger will surely drive his men in the right direction. 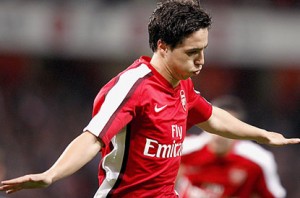 Arsene can dream of a title largely due to this lad

Wenger doesn’t really have to worry about injury issues this time around. Players seem to be match fit despite the tight schedules. This basically means that the Arsenal will again try to play a creative and moving game as they always do. Expect a lot of defense splitting passes from the centre of the park. Chamakh’s inclusion will surely test the City defense as the Moroccan is so good in the air. Nasri has been in bright form this season and the link up with midfield on the flanks is always bound to cause problems to the opposition as one has witnessed several times this season.

Mancini goes into the game with a problem on his hands. Mario Balotelli, who recently scored a hat trick to make his mark, is out and so is David Silva. Adam Johnson has cut out a frustrating figure at Eastlands but whether he will make move away from City is uncertain at this point. However, the youngster has had a good run games off late including a goal in the last game against Blackpool, and the knee injury to Silva may just be the blessing in disguise for the Englishman.

It will be a game dictated primarily by the midfield from both sides. Both the teams are creative, love attacking football and going forward which serves this fixture as the one to look out for on Wednesday night.

It was a busy Christmas for Blackburn Rovers following the sacking of former manager Sam Allardyce and present manager Steve Kean has a lot of responsibility on his shoulders as Blackburn are slowly climbing down the ladder. So much that club owner Anuradha Desai sees him at the perfect person for the job. With just one win out of four games under Kean, the Rovers are now in 12th spot but a win against Liverpool will be a good opportunity for the team to prove their mettle and moreover, Kean will win the faith of atleast a cluster of fans.

There is a faint air of optimism slowly growing at Liverpool with the opening of the January transfer window but a much bigger task for the club right now is to get some wins under their belt so they can enter the top four. It has been a tough time for Roy Hodgson at the club so far and a fixture congestion is the last thing the Gaffer needed; but the manager is doing a good job in bringing in some tranquility in the squad so they can go out on the pitch with the confidence to win the game. The win against Bolton places the Reds in 9th spot and three points against the Rovers will ascend them to 7th. Every game is a must win for the Anfield outfit and they have no choice but to play better than they always do.

Steve Kean is a lucky man as his team walks into an important fixture without any serious injury scares. With the towering figure of Chris Samba in the centre of the park, Liverpool’s frontmen will find it hard to win their aerial battles. His partnership with Phil Jones will force Liverpool to rethink their strategies as feeding aerial balls is not the best way to go. Up ahead in attack, Pederson and Emerton have done a fairly decent job for the club so far this season and Kean will be relying on the duo to unlock the Reds’ defense. The presence of Kalinic in the striker role has injected some urgency in the way Blackburn play and so this game can be expected to be a high tempo game.

Liverpool welcomed back Steven Gerrard and Daniel Agger in the game against Bolton Wanderers last weekend and it certainly showed the difference it made while having such pivotal figures take the pitch. Although match fitness might be an issue, Hodgson can only take a late call on player fitness and so the squad selection for central defense and the central midfield seem to be unknown as of now. Nonetheless, whatever team Roy puts out at Ewood Park, there is only one thing that he knows needs to be done- attack. The Reds are good in piling up the pressure in the early minutes of the game and an early goal will certainly make things harder for the team and the manager. Roy is hoping for 2011 to be little more kind. Well, let’s wait and watch.