Inter exited the Champions League on Wednesday against Schalke after their below par 1st leg performance at the San Siro. The Nerazzuri have suffered 3 defeats in their last 4 matches across all competitions. The solo victory came last weekend against a weak Chievo team who are struggling themselves in the league. Inter will have to do much better defensively if they are to have any chance of winning the Scudetto for the 6th time in a row. With Milan having a tougher road ahead, Inter will be aware that any slip up from their rivals has to be capitalised to the maximum extent. One thing that could be worrying the Inter coach Leonardo is the fatigue factor to so many of his players who have had a hectic schedule since the start of the World Cup. However, Inter captain and legend Zanetti has refused such claims and says his team is up for the task. With a midweek trip to Rome to face Totti and Roma looming large, Inter will have their hands full from now and it is crucial that they not slip up any further. Briused and Battered by the Germans!!!

Inter’s opponents haven’t set the Italian league on fire either. Parma have struggled to collect any sort of points since the turn of the year. Shockingly, Gialloblu have notched just a single win since January and are sitting just one point behind the dangerous relegation place. Parma have collected 32 points from 32 games and with just 6 games left, they could be left for dead come the end of the season especially with matches against Juventus and Udinese left to play. If they are to get any sort of positive result against Inter, Parma might well take that confidence and survive the relegation battle.

Mirante will stick behind the posts and will be hoping for a better outcome for his team which suffered a 2-0 loss to Lazio in the last round of fixtures. Zaccardo and Modesto will be the full backs for Parma with both of them trying to stop their opposition full backs from delivering dangerous crosses. Lucarelli and Paletta will have to be on their toes against the dangerous Inter attack especially Milito who will be keen to prove why he was Inter’s best player last season.

Valiani and Dezemaili will be the wingers on either side of the pitch but might well be pushed back to help their defenders stop the opposition full backs along with Eto’o who’ll be roaming all over the pitch. Candreva will be the supporting cast upfront for the tricky Giovinco who’ll drop into the hole and create opportunities for his ex-Juve team-mate Amauri.

Parma will know that Inter will come at them and the home side will have to defend well in order to be kept in the game considering their recent affairs. Yet, there will be chances for the Gialloblu when Inter get stretched especially when they defend high up the pitch. It will be crucial for the hosts to get the ball to Candreva and Giovinco as the latter can create havoc with his intelligent positioning and running and could provide the required ammunition to Amauri. Samuel has returned to the 22 man squad but this game comes too early for the Argentine international. Chivu should be back on the bench after his suspension from red card he picked up in the Milan derby. Julio Cesar, surprisingly kept a clean sheet in Inter’s last league fixture and will be hoping to repeat the same. The return of Lucio has certainly boosted the Nerazzurri’s defense along with the young Ranocchia who is in a bit of troubled form off late. Maicon has never been the Maicon of last season and would slot in at Right Back. Mirroring Maicon’s role on the other flank will be Japanese Nagatomo after a mediocre performance against Schalke on Wednesday.

Cambiasso showed why he is so important to Inter in the last fixture linking the defense with the attack and also scoring a crucial goal against Chievo. The Argentine anchor will resume his defensive midfield role with Zanetti and Stankovic providing the width on either side of Cambiasso. Sneijder and Eto’o will have a free role with Milito up front on his own. The Cameroonian will be expected to cut across the left and shoot or support the holding Milito. Sneijder will again be the chief architect in breaking down Parma’s defense. Milito, having returned from injury scored a goal against Schalke and will be hoping to do the same against Parma.

Tactically, Inter have been naive off late with their high defensive line hurting them big time both in the Domestic and Continental competitions. One wouldn’t expect them to change this system atleast until the end of the season as they desperately need to win all the games. This can go on to hurt them on the break where all the teams have exploited their weakness and Parma could do the same. However, Inter have brilliant attacking options in the likes of Sneijder, Eto’o and Milito and will overpower the home side physically and tactically.

Argentine international Milito was Inter’s best player under Mourinho but has been a shadow of his own self due to injuries and bad form. However, the former Zaragoza striker has come back in time and is starting to look dangerous again. 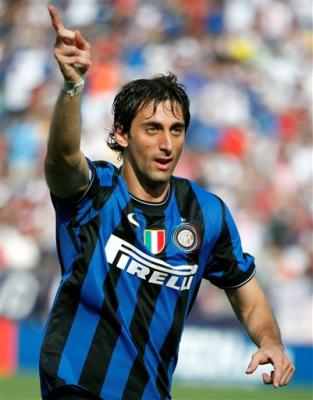 Back to his best??

The Nerazzurri desperately didn’t need Samuel Eto’o running out of gas towards the close season run in. Milito has just scored 7 goals all season and will be looking to stretch his goal tally into the double figures in the next 10 matches in all competitions. A goal or two against Parma would be a good start which can put Inter closer to Milan in the surge for yet another title.

The home side will be desperate for a win as they sit only a single point behind relegation. This could be a massive advantage for Inter who can utilise the oppurtunity of hitting Parma on the break. But Leonardo has used a different system all along and would be reluctant to change that.

Inter will probably play with a high backline again and are bound to concede a goal at the same time scoring goals. The Nerazzurri will have too much upfront for the home side and should see them scrapping a narrow victory keeping their Scudetto aspirations alive.