The Group stages of I-League second division threw up an interesting mix of teams. The six teams which qualified for the final round included some traditionally big clubs like Mohammedan and Vasco, along with less fancied names like Southern Samity and Royal Wahingdoh. This was also a forgettable season in second division for each of the five Kerala teams.

Group A – New Kids on the Block Qualify

Two debutantes in I-League second division – Southern Samity and United Sikkim – powered their way to the final qualifying round from Group A. As we pointed out in our preview, Southern Samity had assembled a formidable squad to push for I-League promotion this season and their players stood up to the challenge when required.

Southern didn’t make best of starts to their campaign – failing to break a goalless deadlock against Simla Young. Pressure mounted on them in the second match when they faced local side Gauhati Town Club, as the team from Assam led 1-0 at half time. Southern came back with style in second half, scoring three goals with Francis Xavier opening the scoring. Bolstered by this win, Southern picked up three more invaluable points against United Sikkim in next match – repeating the 3-1 scoreline. Francis and Edmilson scored in consecutive games by finding the net against United. Edmilson made it three goals in three back to back matches when he scored the winner against Golden Threads on 10th April. By this time, the 2011 IFA Shield finalists were looking good for qualifying from Group A. After three wins, Carlos’ men might have become complacent as they slumped to a loss against Langsing FC. That loss made their last match with NISA a do-or-die one. Southern showed no signs of nerves in their crucial match, curving out a clinical 2-0 win with a brace from Rajid Ahmed. 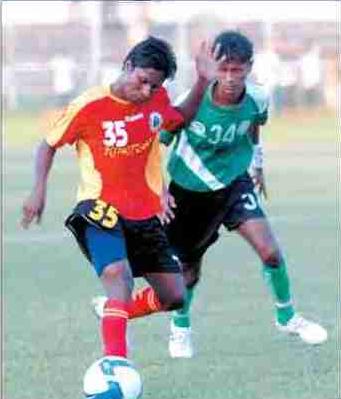 Despite missing stalwarts such as Baichung Bhutia and Rennedy Singh, United Sikkim breezed into the final round of qualifiers with thirteen points from six matches. On loan East Bengal striker Budhiram Tudu was in fabulous form, scoring eight goals – highest in this round. United began their campaign with a 2-2 draw with Langsing SC. NS Manju, scored two goals in that match. They grabbed their first ever victory in a football match when they thumped NISA 2-0 in second match – John Meyongr scored both goals. United suffered disappointment in their third match by going down 3-1 to Southern Samity.

From their fourth match, the Budhiram show began; the striker from Jharkhand scored a brace as United grabbed a crucial 2-0 win over Shimla Young. He repeated his performance against Gauhati Town Club as his club earned an emphatic 4-1 win. Budhiram scored a hattrick in the final group game as United Sikkim booked their passage to next round thanks to a 4-1 win over Golden Threads. The club from Sikkim has certainly made a brilliant start to their journey in Indian football. Their signing of former Liberia National team captain Joseph Lapira was easily the headline grabbing transfer in division-2. Players like Budhiram, Meyongr, Rongti have put in impressive performances and will be hoping to do the same in the next round.

Langsing SC came closest to qualification from Group A, other than the top two teams. Langsing did well against Southern and United, garnering four points from those two matches. However, they were undone by shock losses against Golden Threads and Simla Young. R Lalnundanga was one the standout players for Langsing SC. NISA came close to qualification also but fell in the final hurdle, losing their crucial encounter with Southern Samity. Local favourites Gauhati Town Club was largely disappointing as they finished in bottom spot among seven teams in Group A.

Group B – Mohammedan ease in Second Round, intense competition for 2nd spot

Mohammedan Sporting had a surprisingly smooth ride to second round from Group B. Fuja Tope’s team was once of the favourites from this group but were also helped by some insipid performances from others. Mohammedan began their campaign on a stuttering note – barely scraping past SESA Goa. Journeyman Dipendu Biswas, with over 200 goals in Indian football, scored the vital winner two minutes before the final whistle. The Black and Whites dropped points in next match by drawing 2-2 against Malabar United. Things didn’t improve in the third match as they were surprisingly held to a stalemate by whipping boys Denzong FC. Karthik Kisku and Chizoba were standout performers for the century old club as they registered an emphatic 4-1 win over Kenkre FC to end their winless streak. Against Josco FC, Dipendu Biswas again rose to the challenge. With the match tied at 1-1, Dipendu scored a 95th minute penalty to earn Mohammedan’s third win of the campaign. Mohammedan didn’t look back after that win and topped the group eventually. The fight for second place in Group B was intense and went down to the wire with Meghalaya outfit Ar-Hima emerging as victors. Zico Zoremsanga proved to be a crucial player for Ar-Hima, scoring in back to back wins over Kenkre FC and Denzong Boyz in the initial stages. Ar-Hima scored eight goals in these two matches – a fact that would later prove crucial. Three teams finished level on 10 points – Ar-Hima, Josco and Kenkre FC. Ar-Hima with a +5 goal difference finished ahead of Josco (+1) and Kenkre (+3).

Though Kenkre FC didn’t qualify for final round, they will take lot of positives from this campaign. Coached by one of the youngest managers in Indian football – Floyd Pinto – Kenkre began with a 3-0 win over Josco FC. They did conceded four goals against both Mohammedan and Ar-Hima and that had a negative impact on their goal difference. Midfielder Sadananda impressed with his showing for Kenkre FC. Kenkre’s 7-2 win over Denzong Boyz was one of the biggest wins in this year’s second division.

Josco FC has some big plans in terms of infrastructure for future. Inability to qualify for I-League will certainly hamper their progress but they can take heart from the fact that they were the best team among five Kerala clubs. Their 4-1 win over SESA FC was one of the highlights of their campaign.

SESA FC was a major disappointment this season. They won just one match and slumped to heavy losses in multiple games. Malabar United never looked like seriously challenging for qualification either. Denzong Boyz was one of the most hapless teams in the competition and didn’t win a single match. This was more of a learning experience for the team from North East.

Group C was a tale of three teams – Royal Wahingdoh, Vasco SC and Aryan. After first few matches the gap between these three teams and rest of the pack was painfully evident. In the end, Royal and Vasco qualified while the club from Kolkata was left ruing the results of its head to head encounters against the top-2.

Carlton Chapman’s Royal Wahingdoh was undoubtedly the best performers among twenty-one teams in Division-2. They were the only team to maintain a 100% record in group stages, despite being grouped with two tough teams. Royal began their campaign with a solid 3-1 victory over PIFA. They looked to be in trouble against BEML in third match as they trailed 1-0 till 89th minute. However, late strikes from Tulunga and Seityesein ensured Royal grabbed their third win in as many matches. In the end, it came down to two crunch games against Vasco and Aryan, and Royal showed great character in both the clashes.

They clawed their way back from 1-0 down to seal a 3-1 win over Vasco. Against Aryan, another keenly poised encounter ensued as the teams were tied at two goals apiece during regulation time. The team from Shillong again grabbed a late goal through Jackychand Singh winning the tie 3-2. Seityesein Singh with six goals and Jackychand Singh with five goals have been two star performers for Royal. Carlton Chapman’s team is capable of going all the way to the I-League but they must keep their feet on the ground for now. 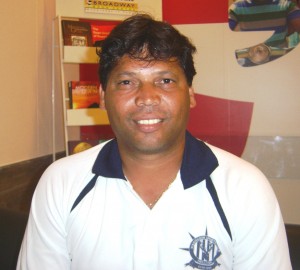 Chapman has drilled his team well.

Vasco SC, one of the top teams in India a decade ago, squeezed into second round by virtue of their crucial 3-2 win over Aryan. They made headlines with their first match by pumping in eight goals past BEML. They continued their free scoring form before coming up against Royal Wahingdoh. A 3-1 loss in that match made their encounter with Aryan Club all the more important. Against Aryan, they raced off to a 3-0 lead within first 55 minutes, putting the result beyond doubt. Aryan did come back to score two goals but couldn’t prevent the loss.

Raghu Nandi’s Aryan would feel hard done by their exit in group stages. In hindsight, their performance was better than some of the teams that qualified from other groups. However, they were undone because of the unique nature of Group-C. With Babatunde-Stanley duo scoring goals for fun, Aryan notched up sixteen goals in first four matches while conceding none. They came up short when it mattered most against Vasco and Royal. Raghu Nandi’s defensive line, which was the best in KFL, let in six goals in these two matches as Aryan missed out on qualification despite garnering twelve points. However, Aryan did make an encouraging debut in I-League Div-2.

PIFA Colaba was another team that impressed, given their extremely modest means. PIFA was not only one of the most financially constrained teams but they also had the youngest squad. Despite these handicaps, they conjured up two victories in six matches with youngster Mintu Saha scored a plethora of goals.

Chandni FC and BEML competed with each other for title of worst team in division two and in the end it was the team from Kerala which emerged victorious.