It’s been an unreal three weeks for Arsenal, who have been witnessing their chances of landing a trophy mathematically reduced to one – the Premier League title. The manner in which they crashed out of the competition has been anything but dignified – a freak goal against Birmingham, a referee-influenced loss to Barcelona and a tactical surrender to Ferguson’s lads (yet again) would in all possibility have deprived the players of any motivation that they exhibited at the start of February. Which is why the league game against the Baggies will determine if the Gunners can turn the tide and set out to prove that they are not the ‘also-rans’ this time around.

With Manchester United participating in three competitions and having a tougher run-in in the league, this is the only chance that Arsenal has to lay their hands on the coveted trophy; this is easier said than done, given the team’s consistent history of failing to deliver the goods when expected. Should Wenger’s lads secure a victory at the Hawthorns tomorrow, it will not only stem the rot but will also provide a much needed impetus to push for the title; with the two weeks international break looming ahead, the Gunners will have most of their injured players back in action for April, and will be fresh to take on the Red Devils in their pursuit of the title.

West Bromwich have of late been on a decent run of form under ex-Liverpool manager, Roy Hodgson. They have secured three vital draws and a win over Birmingham City in their last four fixtures, but still remain in danger of relegation, with just nine points separating the 10th placed and last placed teams. The Baggies handed the Gunners a shock defeat at the Emirates in the first matchup between the two sides this season, staving off a Nasri-inspired comeback by the home team to win 3-2; but this time, they will come up against a bloodied and wounded Arsenal side, who despite being down to the bare bones by injuries to many of the first teamers, will not be so easy to keep a leash on. Roy Hodgson will be counting on his quick players to put pressure on Arsenal’s defense, which will be without Djourou in the fold.

Roy Hodgson has no injury worries, with only Ibanez and Dorrans missing out due to a hamstring injury and a sprained ankle respectively. The Baggies have been blowing hot and cold this season, and they are not safe from relegation, with a mere five points separating them and bottom placed Wigan with nine matches to go. They have been unable to get the needed results against fellow league strugglers, which included surrendering a 3-goal lead to West Ham and draws with Wigan and Wolves. With the likes of Arsenal, Liverpool, Chelsea, Tottenham and Everton awaiting them in the remaining games of the season, staying in the League becomes the highest priority, and they can prove to be dangerous customers.

The absence of Song, Diaby and Fabregas in Arsenal’s midfield means that they will have to depend a lot on Denilson, Rosicky and Ramsey to replace these players, and this will be a bit of a relief to West Brom. Morrison and Thomas are pacy, and the former’s long shots will trouble Almunia, who will man the posts in place of the injured Szczesny; Peter Odemwingie has had an indifferent run of form since his goal scoring exploits at the start of the season, but will be looking to repeat his performance against the same side last time around. Carlos Vela is ineligible to play against his parent club. Chris Brunt’s set pieces and crossing will keep the Gunner defense on their toes; counter-attacks and dead ball situations are the tickets to a certain goal for the Baggies, especially without the impressive Djourou in Arsenal’s backline. However, Nasri, Arshavin and van Persie will be quite a handful for the Baggies defense, who are not exactly renowned for being tight and are susceptible to quality opposition attacks; Paul Scharner and Youssuf Mulumbu will have to assist the defense in stifling out Arsenal’s attacks, and look to hit the Gunners on the counter. The best way to stop Arsenal is to cut supplies from the midfield and give the ball to the wingers, who have enough pace and ammunition to cause panic to Arsenal’s defenders.

The Gunners are currently in the middle of a nightmare, having gate-crashed in three of the four competitions, where they were in a healthy position; to add salt to their wounds, they will be without a clutch of key players for this month. They lost their best defender, Djourou, to a shoulder dislocation as a result of a freak collision with Sagna, and have only two fit center backs in Squillaci and Koscielny, with Miquel as a backup. Diaby sustained a groin injury against Manchester United in the FA Cup, while Fabregas, Song and Walcott continue to remain on the sidelines. Wenger has confirmed that Vermaelen is out for the season, and the Belgian joins Fabianski and Szczesny on the treatment table. With Mannone injured, Jens Lehmann has been signed for the remaining games of the season as a back-up to Almunia and will feature on the bench in the West Brom game; the news of the mad German being in the team has already sparked euphoria among Arsenal fans, who hope that he will have the same effect as Sol had last season, and that his passion and experience will rub off on the younger players. Bendtner could be back after recovering from infection, which saw him miss the FA clash with Manchester United.

It’s been a while since Nasri and Arshavin found the back of the net, and the duo will be raring to break the drought and end the season on a high. Ramsey could be given a start along with Wilshere and Denilson, while Squillaci joins Koscielny in central defense. The Gunners would do well to heed the mistakes they made in the home game against West Bromwich, and show the Baggies that they mean business this time around. Sagna has been off-colour in recent games, and he will be needed to be at his best to curtail Thomas’ forward runs, while Clichy would do well to keep an eye on Morrison and deny him space to unleash his trademark screamers. Squillaci is poor against pacy players, and he will have to repeat his Stoke City performance in this one. Another weak link in the Arsenal setup is Denilson, who hasn’t made much of an impact this season, and the Brazilian will need to do more than just pass sideways to his teammates. It will be interesting to see if Chamakh will be given the nod ahead of van Persie, who has endured a fruitless three weeks so far and could need some rest. 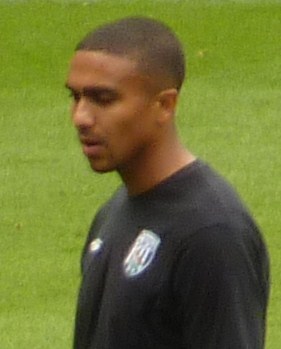 The ex-Arsenal player was at the heart of his side’s victory over the Gunners at the Emirates, as his pace and guile befuddled Clichy and Koscielny on counter attacks. West Brom will be looking to attack on the break, and he will be the vital link to beating the likes of Squillaci and assist Odemwingie and Morrison in the buildup.

West Brom 1-2 Arsenal
The Gunners are devoid of creativity in the absence of Fabregas, but the trio of Van Persie, Nasri and Arshavin pose sufficient threat to the Baggies defense. Arsenal’s midfield and defense will be stretched by the home side’s wing play and the efforts of Scharner and Brunt, but they will hold the fort and come away unscathed.