AC Milan have reportedly reached an agreement in principle with Japhet Tanganga, with the Tottenham defender keen on moving to San Siro.

According to Corriere dello Sport, as relayed by Sport Witness, AC Milan have reached an agreement in principle with Japhet Tanganga. The Rossoneri are keen on signing the versatile Tottenham defender and are looking to take him on loan but want an option to buy rather than an obligation clause.

Japhet Tanganga’s time at Tottenham has spiralled out of control, as his loss in form has coincided with the period when the team were not doing too well. However, while Spurs have steadied the ship with the arrival of Antonio Conte, the Italian manager does not count on the versatile defender.

Even though Tanganga played a vital role at the start of the 2021/22 season under Nuno Espirito Santo, Conte does not rate him and remains keen on dispensing with the defender. Tottenham need to trim their squad ahead of the upcoming season, allowing them to bring in more recruits.

Having signed Djed Spence and Clement Lenglet to play in positions that Tanganga could have occupied, the 23-year-old seems to have no future at the Tottenham Hotspur Stadium. However, with his contract running until 2025, the north London club remain relaxed about a potential sale, 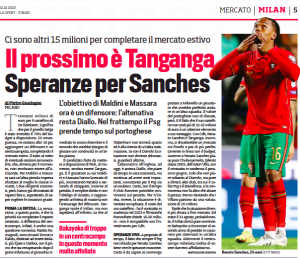 AC Milan have been keen on signing Tanganga throughout this summer and have always considered making a loan move for the versatile defender. Now, they have an agreement in principle with the player, with few vital details yet to be ironed out.

For instance, Milan want a loan deal with an option to buy rather than having an obligation clause inserted. However, if things go well at San Siro next season, they might be in a position to exercise it.

But with a chunk of their budget already exhausted on Charles De Ketelaere, AC Milan do not have sufficient funds to bring in a defender and a midfielder this summer. Meanwhile, Tanganga has been keen on joining AC Milan, but will not wait for too long.

The Tottenham defender is eager to play regularly next season and senses he has the opportunity to do that at San Siro. Spurs and AC Milan are expected to finalise a loan deal in the coming days, with Tanganga’s exit freeing up some much-needed space in Conte’s squad. As for Milan, they are hoping to improve the defender’s overall form and develop him in the mould of Fikayo Tomori.