According to Tuttosport (h/t Sport Witness), Manchester United starlet Alejandro Garnacho is seemingly becoming one of the most sought-after prospects ahead of the transfer window, with Juventus among the clubs hot on his trail. The Italian giants are closely monitoring the youngster’s progress, perhaps with an eye for a move in the coming summer.

A native of Madrid, Garnacho was a member of the Atletico Madrid youth setup before he joined Manchester United in the summer of 2020. Since then, the youngster has enjoyed a rapid rise to prominence, starring in the youth competitions and even playing on a couple of occasions for the senior side.

A left-winger by trade, the 17-year-old netted 16 goals in all competitions for Manchester United’s youth team this past season. He has showcased his talents on the international stage as well with Argentina’s youth teams and is currently the top-scorer in the 2022 Maurice Revello tournament, netting thrice.

Garnacho’s explosive performances have not gone unnoticed. Ralf Rangnick already handed the youngster a couple of appearances for the senior side. The player is expected to be given a more prominent role in the first team next season, especially with Marcus Rashford facing an uncertain future at the club. 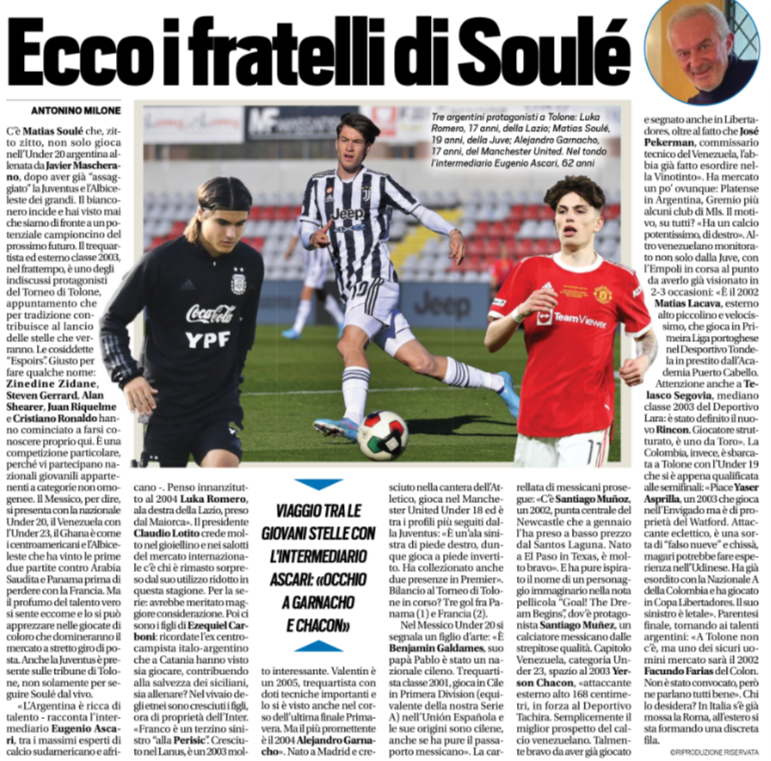 Manchester United are also set to lose both Juan Mata and Jesse Lingard, with the latter becoming a target for AS Roma, West Ham, Newcastle United and Everton, among many others.

However, Juventus might be looking to put an early end to Garnacho’s career at Old Trafford by luring him to Turin this summer. With the club set for a refresh following yet another disappointing campaign, the Old Lady are looking to add fresh blood to their ranks ahead of the coming season.

Garnacho could prove to be a wise long-term investment for the club as he can offer competition for Federico Chiesa. His ability to operate on the opposite flank could also open up endless tactical possibilities for coach Massimiliano Allegri.

That said, Garnacho does not have too many reasons to leave Old Trafford this summer. The club are looking to embark on a new era under Erik ten Hag, a coach known for his tendency to hand young players the opportunity to perform on the big stage. With the likes of Mata and Lingard on their way out, it could be an excellent opportunity for the Argentine to make a name for himself at the Theatre of Dreams.