Tottenham Hotspur are reportedly planning to reignite their pursuit of on-loan Barcelona forward Adama Traore after missing out on him in January.

Tottenham Hotspur’s failure to sign Adama Traore in the January transfer window had played a major role in leaving Antonio Conte dissatisfied with the club’s performance in the market. But after just a couple of months, the Londoners could be in contention to sign the Wolves attacker, who is currently on loan at Barcelona, reports SPORT, as relayed by Sport Witness.

Adama Traore was close to joining Tottenham in January, with many reports even pointing towards a completed medical. But Barcelona made a last-minute move to snap up the Spaniard on a short-term loan deal. Quite predictably, the player did not reject the opportunity to return to his former club in search of more prominence after a few years of success in the Premier League.

After a promising start to his life at Camp Nou, though, Traore appears to have fallen down the pecking order. The redemption of Ousmane Dembele has played a vital role in restricting his first-team minutes at Barcelona.

Although the Frenchman is expected to leave in the summer, amid interest from Arsenal, Barcelona are likely to bring in attacking reinforcements. 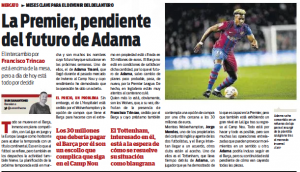 Leeds United frontman Raphinha, for one, has been identified as one of the top targets by Barcelona, with the Brazilian reportedly agreeing personal terms with the Catalans.

In light of Raphinha’s potential arrival, Barcelona are unlikely to exercise their buy option for Adama Traore, worth around €30 million. It could see the Spaniard return to the Molineux at the end of the season, thus opening the door for a potential move to Tottenham Hotspur.

The Lilywhites had done relatively well to bring in Dejan Kulusevski late in the January transfer window. And while the Swede has impressed since joining Tottenham, there appears to be a lack of depth in the attacking department for Antonio Conte.

The addition of Adama Traore, to that end, could solve the issue as the former La Masia graduate is capable of operating on the right flank as well as a right wing-back. It means he can compete with Kulusevski while potentially becoming Tottenham’s first-choice right wing-back next season, especially amid speculation surrounding the future of former Barcelona defender Emerson Royal, who could leave in the summer.