Croatia will look to kick-start the FIFA World Cup 2022 campaign when they face Canada at the Khalifa International Stadium on Sunday.

Matchday 2 of the FIFA World Cup 2022 will continue with four more games on Sunday, with teams from Group E and Group F taking the field. The battle for the second spot in Group F will be electric, and it will continue when Croatia and Canada face off at the Khalifa International Stadium.

Croatia entered the FIFA World Cup 2022 as one of the dark horses to lift the Jules Rimet Trophy. The last of the golden generation is on its last legs, and Zlatko Dalic’s men are currently on a seven-game unbeaten run. But Dalic will know that Vatreni cannot drop points anymore in a tricky Group F.

On the other hand, Canada’s form heading into FIFA World Cup 2022 has been inconsistent. The Canucks have won three and lost three of their last seven games, including the 1-0 defeat to Belgium earlier this week. But John Herdman has a solid squad at his disposal, and his players can give the best teams a run for their money.

Croatia and Canada have never locked horns before. And ahead of the first-ever meeting between the two sides, The Hard Tackle takes a closer look at the FIFA World Cup 2022 Group F encounter.

In two days, #Croatia is back in the #FIFAWorldCup action! 🇭🇷🇨🇦#Qatar2022 #Family ❤️‍🔥 #Vatreni pic.twitter.com/HX8UA6wCx6

Zlatko Dalic has one new injury concern hampering his preparations ahead of the game against Canada. The Croatia head coach is sweating over the fitness of Nikola Vlasic, who sustained a calf injury versus Morocco.

The game against Canada might have come too soon for Vlasic, who will likely sit this one out. And Mario Pasalic might be in line to replace the 25-year-old on Sunday. The 27-year-old will take up the right-wing berth on paper, but he will often drift in and act as an additional playmaker.

Ivan Perisic is the leading scorer in the Croatia squad for the World Cup and will need to pull his weight. The veteran wide man will line up alongside Andrej Kramaric in the final third, and the 31-year-old striker needs to do better.

The midfield unit will be Croatia’s strength throughout the World Cup campaign. And Dalic will count on Luka Modric to carve out the openings. Vatreni’s captain will provide defensive support to Marcelo Brozovic and Mateo Kovacic, the latter being the workhorse in the middle of the park.

Dejan Lovren is the old warhorse for Croatia and will look to keep things tight at the back. Josko Gvardiol will form the central defensive partnership with Lovren, with Josip Juranovic and Borna Sosa being the full-backs. The wide defensive duo are forward-thinking in their offensive approach and will provide the width in the final third. 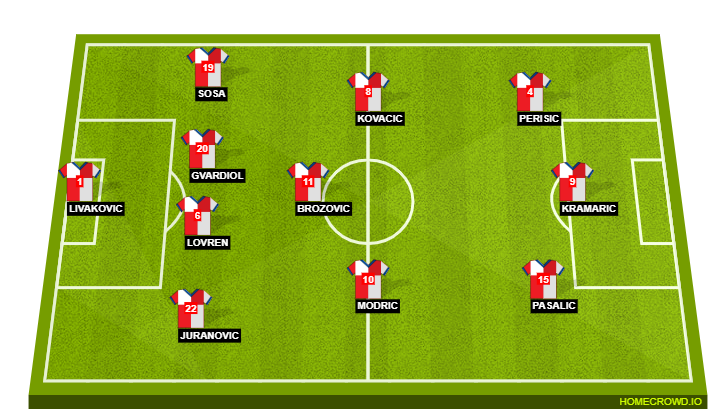 John Herdman does not have any new issues to deal with ahead of the game against Croatia. The Canada head coach will have a full-strength squad at his disposal, with Alphonso Davies fit and firing.

Milan Borjan is a veteran between the sticks and will aim to use his experience to keep Croatia at bay. A back three of Alistair Johnston, Steven Vitoria, and Kamal Miller will look to protect the 35-year-old goalkeeper. The trio will aim to cut out the passing lanes for Croatia around the box.

"When you're at a World Cup, these second games can really define what your destiny is going to be."#WeCAN pic.twitter.com/BKHrFHmrMn

Davies will be one of the players providing the creative impetus for Canada against Croatia. And the 22-year-old will need to be at his electric best on the left flank. Richie Laryea will line up on the right wing and be more defensive-minded of the two wing-backs.

Captain Atiba Hutchinson is the second-oldest player to turn out at the FIFA World Cup. And the 39-year-old will become the first Canadian player to make 100 appearances for Les Rouges. Hutchinson will line up alongside Stephen Eustaquio in the middle of the park.

Junior Hoilett could have done better against Belgium and might make way for Cyle Larin. The 27-year-old will provide a more clinical presence in the final third and hope to push Jonathan David for a better output. Finally, Tajon Buchanan will complete the offensive unit for Canada. 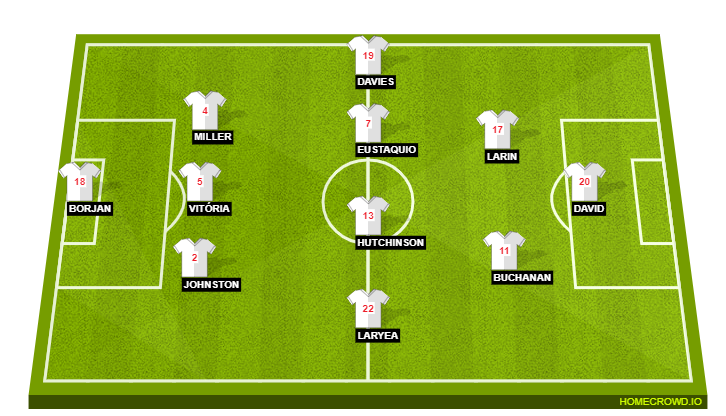 Goals seem to be coming at a premium for Croatia right now, and Zlatko Dalic needs his attackers to be on top of their games. Andrej Kramaric, in particular, needs to step up to guide Croatia to the Round of 16.

The 31-year-old has been profligate in front of the goal for his national side. But the experienced striker has no room for error, with Marko Livaja breathing down his neck. So Kramaric faces a make-or-break game against Canada on Sunday.

Canada might have lost against Belgium, but the Reds were on top of Roberto Martinez’s men for a long time in the game. So John Herdman would have taken the positives from that match to motivate his troops. So Croatia cannot take Canada lightly on Sunday.

Cyle Larin should make the difference after replacing Junior Hoilett in the offensive unit. But a few lapses in concentration might bring Croatia back into the game. And Ivan Perisic might be in business for Vatreni. In the end, there will barely be anything to separate Croatia and Canada, who will play out a 1-1 draw. So the group could be wide open irrespective of the result in the game between Belgium and Morocco.