Uruguay will begin their FIFA World Cup 2022 campaign against South Korea on Thursday, looking to start the tournament with a win.

Uruguay have an exceptional squad packed with talent, and they will be expected to progress through to the knockout rounds of the World Cup, starting with the game against South Korea.

Uruguay will fancy their chances of finishing on top of Group H and progressing as the group winners. Finishing second in their group could lead to a difficult fixture in the knockout rounds against Brazil, and La Celeste will be keen on avoiding that scenario.

Meanwhile, South Korea have a talented squad as well, and they will look to pull off a few surprises in the World Cup this time around.

They did well to prevent Germany from reaching the Round of 16 in the 2018 World Cup, and the Asian giants will hope for a similar feat this time around. While Portugal and Uruguay are the favourites to progress from Group H, South Korea cannot be underestimated, and they have the quality to pull off upsets in Qatar.

La Celeste have no major injury concerns ahead of this game. However, Ronald Araujo might not be risked because he has just returned from a lengthy lay-off. The Barcelona defender is still working his way towards complete match fitness.

Diego Alonso is expected to line up in a 4-3-3, with Sergio Rochet in goal. He has managed to displace Fernando Muslera as the first-choice shot-stopper in recent months.

Guillermo Varela will start as the right-back here, and Mathias Olivera is expected to start as the left-back. At the heart of the Uruguay defence, the experienced Diego Godin will partner Jose Maria Gimenez.

Uruguay have an exceptional midfield three of Federico Valverde, Rodrigo Bentancur and Lucas Torreira. Torreira will sit deep as the holding midfielder, while Valverde will be the box-to-box midfielder. Bentancur will be the metronome and will control the tempo of the play.

In the front three, Luis Suarez is set to start centrally, and he will be flanked by Darwin Nunez on the left and Facundo Pellistri on the right.

South Korea will have to take a big call regarding star forward Son Heung-Min. The Tottenham talisman has only just returned after an eye socket surgery, but he has maintained that he is willing to return early for his country in the World Cup. And Son is reportedly fit to face Uruguay on Thursday.

South Korea's Son Heung-min will be able to play with a mask in their #FIFAWorldCup Group H opener against Uruguay, coach Paulo Bento said as the forward returns from a surgical procedure to stabilize a fracture around his left eye https://t.co/LkzxfVUloz pic.twitter.com/z0OitsMEbp

In addition, Paulo Bento is sweating over the fitness of Hwang Hee-chan, who is touch and go for Thursday. Apart from that, the South Korea head coach has no other injury concerns. Kim Seung-gyu is expected to start as the goalkeeper here.

Kim Moon-hwan and Kim Jin-su will be deployed as the full-backs and will provide the width in the final third. Kim Young-gwon is expected to partner the Napoli defender Kim Min-jae at the heart of South Korea’s defence.

The midfield three will comprise of Jung Woo-young, Hwang In-beom, and Lee Jae-sung. The trio will need to hold the fort in the middle of the park and restrict Federico Valverde & co.

As for the offensive unit, Hwang Hee-Chan might miss out. So Kwon Chang-hoon and Son Heung-min should be deployed as the wide forwards. Finally, Hwang Ui-jo will lead the line for South Korea against Uruguay. 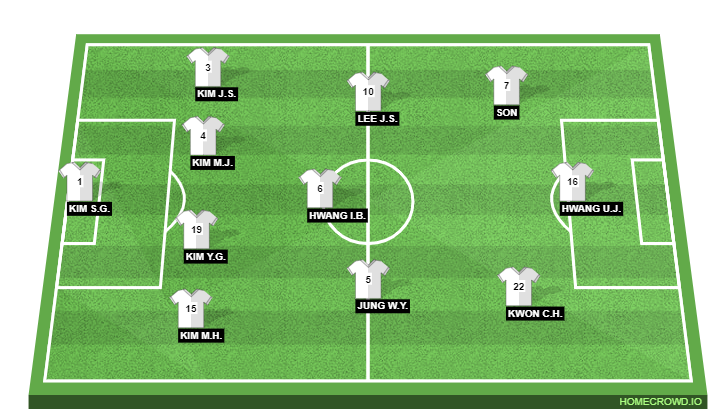 The Real Madrid midfielder has been in exceptional form this season, and he will be expected to dominate the midfield here. South Korea are lacking in depth and quality in the middle of the park, and Valverde will have enough freedom to venture forward and influence the game in the final third as well.

Valverde has played a number of positions for Real Madrid this season, and he will be a key player for Uruguay in both the defensive and the offensive phases of play.

Uruguay have an exceptional head-to-head record against South Korea, and they should be able to extend that with a win here. They have a better team on paper and a proven track record of doing well in major tournaments.

Meanwhile, South Korea are no pushovers and have top-class attackers like Son Heung-min at their disposal. This is likely to be a close contest, but Uruguay should be able to pick up all three points. The Hard Tackle predicts a 2-1 win for La Celeste.