Germany will begin their 2022 World Cup campaign against Japan on Wednesday and the European giants will look to start on a positive note.

Germany will kick off their campaign at the FIFA World Cup 2022 when they take on Japan at the Khalifa International Stadium in Doha on Wednesday.

Die Mannschaft have not done well on the international stage for a while now, and they will be hoping to go all the way this time around. Hansi Flick has a talented core of young players at his disposal, and it will be interesting to see if the players can step up and deliver on the biggest stage.

Meanwhile, Japan will look to salvage some pride during the marquee event in Qatar. The Asian giants have the quality to produce an upset here, and Germany cannot afford to underestimate their opposition when the two teams meet tomorrow.

"We're all going into the tournament with the mindset that we can win the World Cup" 💭🏆@JamalMusiala is excited to get started 🗣️#GER #FIFAWorldCup pic.twitter.com/qvEKZNngjO

Germany have one major injury problems heading into the contest against Japan, with Leroy Sane struggling with a knee issue. Timo Werner and Marco Reus missed out on the tournament with injuries, but Flick will have all of his key players fit and ready for the World Cup apart from that.

Flick is likely to deploy his usual 4-2-3-1 system with Manuel Neuer in goal. In the back four, Thilo Kehrer will start as the right-back alongside Niklas Sule and Antonio Rudiger as the centre-backs.

Sule and Rudiger have done well for Borussia Dortmund and Real Madrid, respectively, this season, and they will need to be at their best if Germany are to flourish in the World Cup. David Raum will start as the left-back here.

The midfield double pivot pretty much picks itself. Bayern Munich duo Joshua Kimmich and Leon Goretzka will start in the middle, with Kimmich shielding the back four and Goretzka being the box-to-box midfielder.

Jonas Hofmann and Serge Gnabry will add pace and flair to the side from the flanks and Jamal Musiala will be the number ten. Musiala will look to drop deep and combine with the midfield duo and link up with the attackers in the final third as well. The youngster will be expected to chip in with goals as well. The ever-reliable Thomas Muller will look to lead the line in the absence of a specialist striker. 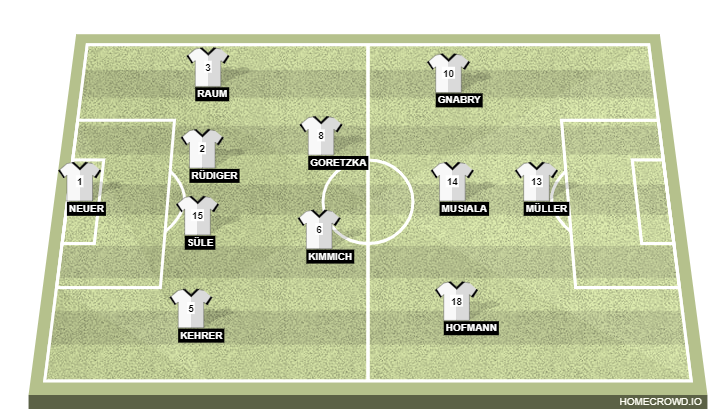 Japan will line up in a 4-2-3-1 as well, with Shuichi Gonda in between the sticks. Hiroki Sakai and Yuto Nagatomo will start as the full-backs. Both players will look to provide ample cover to the centre-backs and keep Germany’s speedsters in check. Arsenal’s Takehiro Tomiyasu will partner Maya Yoshida at the heart of the defence.

Hidemasa Morita will partner Gaku Shibasaki in the midfield pivot. Junya Ito will start on the flanks with the prodigiously talented Takefusa Kubo. Daichi Kamada will start as the number ten, in behind former Liverpool ace Takumi Minamino who will act as the false nine.

The Bayern Munich attacker has been sensational in the Bundesliga this season. Musiala has nine goals and six assists in just 12 league starts for the Bavarian giants and will be the player to watch for Germany in the World Cup, not just against Japan.

In the absence of a specialist striker, Musiala will be asked to share the goalscoring burden with Thomas Muller, and he can do a lot of damage with his intelligence, movement and finishing prowess.

Germany are undoubtedly the better team here, but Japan are no pushovers. This will be a close contest, but Germany have the quality to edge this one. A narrow win for Hansi Flick’s side is on the cards here. The Hard Tackle predicts a 1-0 victory for Die Mannschaft