Manchester United will have an immediate chance of revenge when they host Aston Villa in the Carabao Cup third round.

Manchester United can avenge their recent defeat when they take on Aston Villa in a Carabao Cup encounter at Old Trafford on Thursday. Erik ten Hag will be managing the side for the first time in a cup competition.

Fresh from their humiliation at the hands of the Midlands outfit, Manchester United will renew rivalry once again, hoping to get a victory this time. Erik ten Hag will likely ring in a number of changes, with the Premier League fixture against Fulham looming large ahead on Sunday.

Despite the defeat, alarm bells have not really started ringing. But another loss could leave the Red Devils spiralling out of contract, as they cannot afford to lose their momentum. Manchester United have shrugged off their early difficulties, and with revenge certainly being a priority, Unai Emery’s side can feel the wrath.

Manchester United also received a very tough UEFA Europa League draw against Barcelona. But they will not want to shift their focus to a match which does not seem to have any relevance at this point in time.

Emery could not have imagined a better start in his second phase in England. And the former Arsenal manager needs to ensure Aston Villa’s win over Manchester United was not a flash in the pan.

Manchester United lost to West Ham United in the third round last time and Villa could definitely try their best to replicate that feat knowing, the Red Devils will definitely be under pressure to get back to winning ways.

Aston Villa’s poor away form could be a block in their vision as they are yet to register a win in the last five matches on the road. With Manchester United losing just twice this season at home, they will have a mountain to climb against the Red Devils.

A last-minute assessment is to be done on Jadon Sancho and Antony, but Raphael Varane won’t make it to the squad despite the recent reports on his fitness. Bruno Fernandes will be fresh after missing the Premier League game, while Anthony Martial should start match following his long spell on the sidelines.

Martin Dubravka should be involved for the first time since his arrival from Newcastle United this past summer. Victor Lindelof should pair up Harry Maguire at the heart of the Manchester United defence, while Tyrell Malacia and Diogo Dalot will feature on the left and right sides, respectively.

Fred and Scott McTominay should pair up in the middle of the pitch, while Bruno Fernandes will be further forward. Anthony Elanga will likely come up on the right wing, while Marcus Rashford will operate from his favourite left flank. Anthony Martial should lead the pack.

Jan Bednarek and Leander Dendoncker will not be able to participate in this competition following their involvement in the earlier stage with their previous teams. Philippe Coutinho and Diego Carlos are still nursing their respective injuries and therefore won’t be fit for this clash.

Robin Olsen will be guarding the goal for Aston Villa against Manchester United. Calum Chambers will partner Tyrone Mings in the central defensive unit, while Lucas Digne and Matty Cash continue to be in the starting lineup.

Boubacar Kamara, John McGinn and Jacob Ramsey will try to overpower the Manchester United midfield. Finally, central striker Danny Ings will be flanked by Emiliano Buendia and Leon Bailey in the final third. 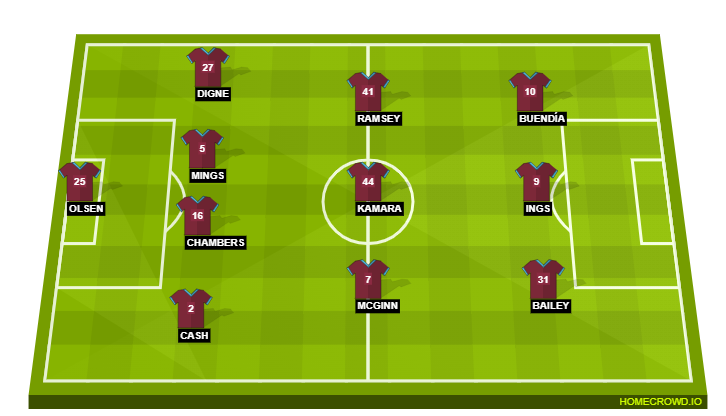 Having spent a long spell on the sidelines, the French striker is very eager to prove his potential to the new manager. So Martial will have a perfect occasion to let his feet speak on Thursday against Aston Villa and guide Manchester United to a big win.

Scoring goals has been a problem for the Red Devils. But their home form has been pretty good as they are yet to leak goals in the last five matches. A scrappy strike for Manchester United might be the final outcome in this penultimate clash against Aston Villa. Thus the Unai Emery hoodoo shall temporarily end for Manchester United.