Tottenham Hotspur will look to return back to winning ways when they travel to the Vitality Stadium to take on Bournemouth on Saturday.

Tottenham are in dire need of a victory, and they must start with three points against Bournemouth. A poor performance against Sporting CP in the Champions League did put a break to their run of defeats. But Spurs cannot afford to lose any more ground in the Premier League.

Antonio Conte’s record against the promoted teams in the top-flight is quite envious as the Italian tactician has lost only once during his entire coaching career across the continent.  As for the result against Sporting, a controversial VAR decision disallowed a last-minute Harry Kane winner, with the replay showing a very close offside call.

Tottenham academy product Marcus Edwards came back to haunt his old club. And his goal can now halt Tottenham’s progress to the next round if they fail to take up their chances in the next game. But Conte cannot really moan about the results and will be demanding an answer from his side against Bournemouth.

Bournemouth were also at the receiving end of two VAR calls as two different handball decisions went in West Ham United’s favour last week. In the buildup, the ball struck the hand of Thilo Kehrer. But Kurt Zouma’s goal stood out as the referee pointed out the hand was in a natural position, leaving Gary O’Neil in utter frustration.

The Cherries’ caretaker manager complained as many as ten VAR decisions have been gone against them this season since. Bournemouth have surprisingly managed to skip the relegation zone, and a win over Tottenham will put them in a stable position heading into the World Cup break.

"Dom Solanke is a lot better than expected, so that's good news and we're hopeful."

Dominic Solanke and Neto suffered injuries and had to sit out the second half against West Ham United. The two players are expected to miss the clash versus Tottenham Hotspur. David Brooks and Lloyd Kelly are already in the treatment room, and Gary O’Neil has to field a team without these four players.

Neto’s unavailability means Mark Travers will return between the sticks. Marcos Senesi and Chris Mepham have shown their intent to protect the Bournemouth goal and need to have another clinical display to thwart Tottenham.

Adam Smith will be deputising in the left-back role, while Ryan Fredericks will continue to be on the right side of the defence. Jefferson Lerma and Lewis Cook will be in charge of the midfield.

Marcus Tavernier will be gliding in from the left wing, and he will try to combine with Ryan Christie, who will start on the right wing. Philip Billing will be the most advanced midfielder, and he will have the responsibility to feed in balls to Kieffer Moore, who will lead the line Bournemouth against Tottenham.

Dejan Kulusevski’s elongated injury-enforced absence will make him wait in the wings, while Richarlison also has to sit out this game.

Hugo Lloris’s position is not under imminent threat, and he will be the last man for Tottenham. Eric Dier will be aiming for a fresh start after the Newcastle United debacle, and he will line up alongside Cristian Romero and Clement Lenglet in the backline.

Both Emerson Royal and Ryan Sessegnon will have their chance to impress against the Cherries. Conte won’t be tinkering with his midfield setup, and Pierre-Emile Hojbjerg and Rodrigo Bentancur will be ready for a tough tussle in the middle of the pitch.

Bryan Gil provided an immediate impact in the last game, and he will be given his first Premier League start. Son Heung-min has not been at his best and will be eyeing a couple of goals from the left flank. Finally, Harry Kane will have to step up his efforts, as he so often has done in the Premier League this season. 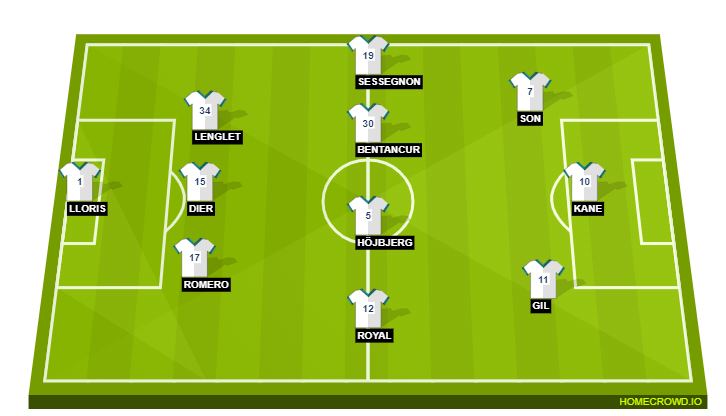 Harry Kane has been Tottenham’s main source of goals. And despite his team’s below-par displays, he has continued to churn out goals. Keeping in view Bournemouth’s poor defensive record, the English striker should inflict more damage on the home side. Expect Kane to make his mark this weekend.

A winning margin below two goals will not be counted as an dominating performance. But Tottenham have the quality to get past Bournemouth easily. The Cherries have improved since Scott Parker’s departure. But Harry Kane will rise to the occasion and deliver the goods for Spurs. The Hard Tackle predicts a 2-0 victory for Antonio Conte’s charges on Saturday.