Tottenham will host Everton in the Premier League on Saturday, looking to continue their impressive start to the season with a win at home.

Tottenham are currently third in the Premier League table, just four points adrift of league leaders and arch-rivals Arsenal heading into the game against Everton. And Antonio Conte will want to close in on the top spot with a win here, with Spurs the favourites heading into the contest.

Meanwhile, Everton have looked better than the dreadful team from last season so far, picking up 12 points from nine league matches. In fact, the Toffees have the joint-best defensive record in the Premier League, conceding only nine goals. But attack has been their undoing, as they have scored just eight times.

Although Tottenham have been vulnerable in the UEFA Champions League this season, they have done reasonably well in the Premier League. So an upset seems quite unlikely. However, Everton are a good side on their day and could certainly give the hosts a run for their money.

Tottenham come into this game on the back of two consecutive victories against Brighton and Hove Albion in the Premier League and Eintracht Frankfurt in the Champions League. The hosts will be relatively confident here and will look to make it three wins in a row.

Ready for another test at home 💪

Tottenham will be without the services of Emerson Royal against Everton. The Brazilian right-back picked up a red card in the North London derby against Arsenal and is serving a suspension. Other than that, Antonio Conte should be able to field his strongest starting eleven. And in some good news, Dejan Kulusevski should be back after recovering from his injury.

The hosts are likely to shape up in a 3-4-3 formation against Everton. While club captain Hugo Lloris is expected to continue in goal, Eric Dier, Cristian Romero and summer signing Clement Lenglet will start as the centre-backs in a back three.

Experienced defender Matt Doherty should start as the right-sided wing-back, with Ivan Perisic turning out on the left. They will be expected to provide width to the side and protect the defenders as well.

At the heart of the midfield, Danish international Pierre-Emile Hojbjerg is set to partner Rodrigo Bentancur. While the former Southampton captain will be expected to break up play and win the ball back, Bentancur will look to keep the play ticking with short accurate passing.

As for the offensive unit, Harry Kane is set to lead the line for Tottenham against Everton. Son Heung-Min and Kulusevski will likely line up as wide attackers, especially after Richarlison sustained a knock to his knee against Eintracht Frankfurt.. 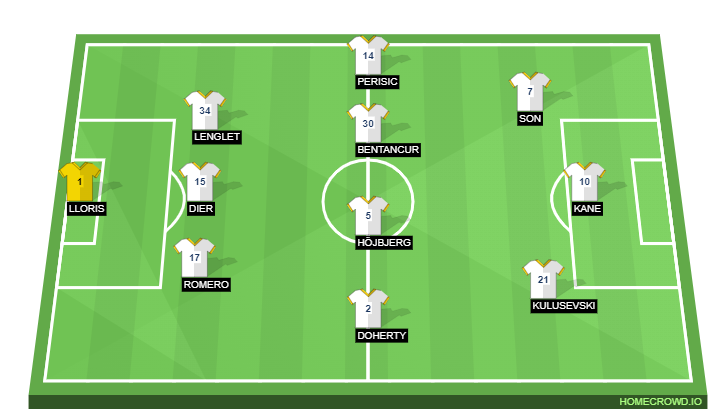 Everton manager Frank Lampard will be without the services of Ben Godfrey, Andros Townsend and Nathan Patterson against Tottenham. Furthermore, Anthony Gordon has picked up five yellow cards and will be suspended for this weekend’s trip to the Tottenham Hotspur Stadium.

The visitors are likely to shape up in a 4-3-3 formation this weekend, with Jordan Pickford starting in goal.

An injury update ahead of #TOTEVE.

Everton captain Seamus Coleman will likely feature as the right-back, with Vitaliy Mykolenko starting as the left-back. Conor Coady and James Tarkowski are expected to pair up at the heart of the Tottenham defence.

Up ahead in midfield, Idrissa Gueye will be deployed as the holding midfielder, and he will be expected to break up the play and win the ball back for Everton. Alex Iwobi and Amadou Onana will start as box-to-box midfielders, and the duo will be responsible for driving the team forward and adding a bit of creativity in the middle.

As for the front three, summer signing Neal Maupay will lead the line for Everton against Tottenham. Dwight McNeil and Demarai Gray will operate as the wingers. 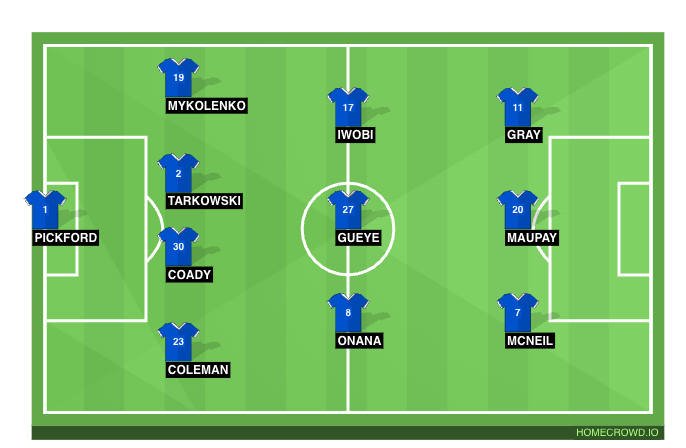 The 30-year-old South Korean international had a disappointing start to the new season. But he seems to have found his rhythm once again. Son has scored five goals and picked up three assists across his last five matches and comes into this game on the back of a brace against German outfit Eintracht Frankfurt. He is our man to watch this weekend, and the South Korean attacker will look to punish Everton.

After failing to win two games in a row, Tottenham have bounced back with two straight victories. And they will be reasonably confident heading into this game. Tottenham certainly have the better set of players at their disposal and will be the favourites to pick up all three points here.

While Everton are no pushovers and will look to make life difficult for the home side, they are likely to fall short in the end. The Hard Tackle predicts a hard-fought contest at the Tottenham Hotspur Stadium, with Spurs clinching a 1-0 win.