Real Madrid will aim to continue the perfect start for the 2021/22 season when they welcome RB Leipzig to the Santiago Bernabeu on Wednesday.

The 2022/23 UEFA Champions League group stage will continue on Wednesday, with Matchday 2 culminating on the day. Eight matches will be on show, with Real Madrid playing hosts to RB Leipzig at the Santiago Bernabeu, aiming to maintain their 100 per cent record.

Real Madrid might have failed to sign priority target Kylian Mbappe in the summer transfer window. But that has not done anything to hamper Los Blancos’ form in the early stages of the 2022/23 season. The Merengues are a month into the new campaign, winning each of the six games thus far despite missing Karim Benzema for much of the last two games.

Real Madrid started the defence of the UEFA Champions League crown with a 3-0 win over Celtic last week and will be the favourites to top Group F. That cannot be said for RB Leipzig, who went down 4-1 to Shakhtar Donetsk in a shock defeat in the Champions League opener.

The Bundesliga giants have also been slow off the blocks in domestic football, with Domenico Tedesco losing his job as a result. Marco Rose has replaced Tedesco at the helm at RB Leipzig and oversaw a 3-0 win over former club Borussia Dortmund in his first game in charge over the weekend.

The match on Wednesday will be the first clash featuring Real Madrid and RB Leipzig. And ahead of the first-ever meeting between the two sides, The Hard Tackle takes a closer look at the UEFA Champions League encounter.

Carlo Ancelotti has a new injury concern hampering his preparations ahead of the visit of RB Leipzig for the UEFA Champions League group stage encounter. On Wednesday, the Real Madrid manager will be bereft of the services of three first-team players.

Lucas Vazquez is the latest absentee, with the Spaniard sustaining a thigh injury in the game against RCD Mallorca this past weekend. Karim Benzema remains unavailable due to the knee issue that he picked up last week. And while Eder Militao has resumed training, the Brazilian international is not in the matchday squad for the game against RB Leipzig.

Antonio Rudiger and David Alaba will continue as the central defensive pairing in Militao’s absence, with Dani Carvajal and Ferland Mendy starting as the full-backs. There is no looking past Thibaut Courtois between the sticks for Real Madrid.

Ancelotti rested Aurelien Tchouameni and Luka Modric for the game against Mallorca this past weekend. The duo should return to the starting eleven against RB Leipzig, with Toni Kroos keeping his spot in the team. Modric and Kroos will provide the creative impetus from the middle of the park, with Tchouameni covering the backline.

Federico Valverde is the go-to player for the right-wing berth in clutch fixtures for Real Madrid, and the Uruguayan international will look to negate David Raum’s threat on his flank. Vinicius Jr. will be the difference maker for Real Madrid, with Rodrygo Goes expected to spearhead the attack against RB Leipzig after Eden Hazard struggled on the weekend. 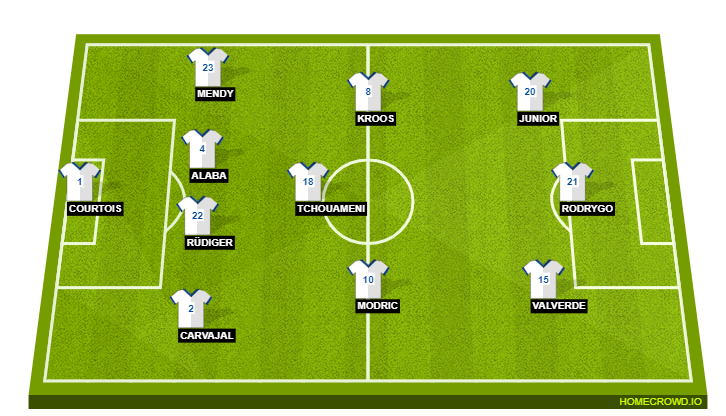 Like his counterpart in the Real Madrid dugout, Marco Rose has a few pressing roster issues to contend with ahead of the trip to the Santiago Bernabeu. The RB Leipzig manager will be without three first-team players on Wednesday.

Lukas Klostermann (ankle), Dani Olmo (knee) and Konrad Laimer (ankle) remain on the sidelines, with the trio still recovering from their respective issues. But Yussuf Poulsen is fit and available after recovering from a thigh injury.

Marco Rose utilised a 4-2-3-1 formation against Borussia Dortmund this past weekend. But the RB Leipzig boss should make use of a more pragmatic 3-4-1-2 system against Real Madrid, with Peter Gulacsi starting between the sticks.

Mohamed Simakan, Willi Orban and Abdou Diallo should form the central defensive unit for RB Leipzig, with Josko Gvardiol missing out again. The formation change should bring the best out of the full-backs and their creative abilities, with Benjamin Henrichs and David Raum taking up advanced positions in the final third.

Xaver Schlager and Kevin Kampl will pair up in the middle of the park, looking to negate Modric and Kroos’s creative output. Meanwhile, the creative onus for Leipzig through the middle will be on Dominik Szoboszlai, with Christopher Nkunku and Timo Werner forming the strike partnership. 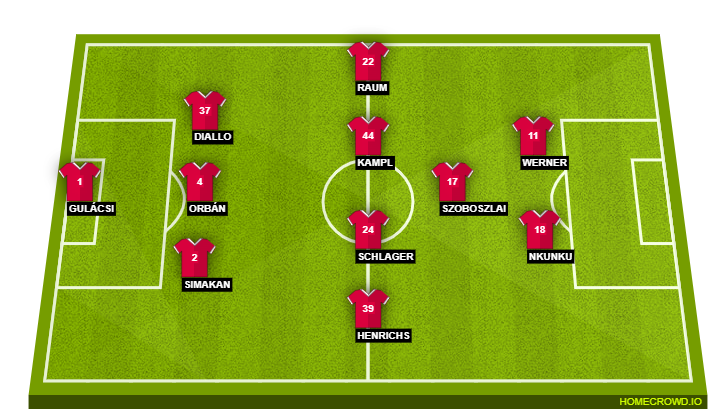 Eden Hazard did not rise to the occasion for a second successive game this past weekend, and the Belgian international might drop to the bench. Rodrygo Goes will thus have the opportunity to make an impression by spearheading the Real Madrid attack against RB Leipzig.

The Brazilian attacker has gradually risen in stature at the Santiago Bernabeu under the tutelage of Carlo Ancelotti. And he has begun the next stage of his progress in the early stages of the 2022/23 season, with the game against RB Leipzig providing him with the chance to get into scoring areas more frequently. It will be interesting to see if he makes his mark this midweek.

RB Leipzig will not make it easy for Real Madrid, with Marco Rose likely placing the emphasis on tightening things at the back on Wednesday. The visitors will also pose a threat in the final third, looking to capitalise on Real Madrid’s defensive frailties.