Real Madrid will aim to continue the perfect start to the 2022/23 season when they welcome Real Betis to the Santiago Bernabeu on Saturday.

The 2022/23 season is moving at a frantic pace ahead of the 2022 FIFA World Cup, but La Liga is cruising along as a weekly feature thus far. Matchday 4 begins this week, and reigning champions Real Madrid will look to make it four wins in four when they play hosts to Real Betis at the Santiago Bernabeu on Saturday evening.

Real Madrid entered the 2022/23 season knowing they would need to retain their high levels following Barcelona’s remarkable spending spree in the summer transfer window. And Los Blancos have responded brilliantly, winning every competitive game thus far, including the three outings in La Liga, to sit atop the table, two points ahead of their bitter rivals.

But Real Madrid will face the only other La Liga club with a perfect record thus far this season on Saturday. The Verdiblancos have been efficient performers in the season’s early stages, beating Elche, RCD Mallorca, and Osasuna to sit behind Real Madrid only on goal difference.

The corresponding fixture last season had ended in a goalless draw, with Real Madrid and Real Betis managing only five shots on target between them. Ahead of the latest meeting between the two sides, The Hard Tackle takes a closer look at the encounter.

Carlo Ancelotti has received a positive update on the team news front ahead of the visit of Real Betis. On Saturday, the Real Madrid manager will have a fully fit squad at his disposal, with Nacho, Alvaro Odriozola, and Jesus Vallejo recovering from their respective injuries.

But none of the three players will feature for Real Madrid against Real Betis unless there is an injury crisis midway through the match. Ancelotti should make a couple of changes to the starting eleven on Saturday, with Dani Carvajal and Ferland Mendy in line to return to action.

Carvajal will likely replace Lucas Vazquez in the right-back berth, with Ferland Mendy starting on the opposite flank. Eder Militao and David Alaba should form the central defensive partnership for Real Madrid against Real Betis, with Antonio Rudiger dropping to the bench. Meanwhile, there is no looking past Thibaut Courtois between the sticks.

Up ahead in midfield, Ancelotti has all his resources at his disposal, with Eduardo Camavinga and Aurelien Tchouameni competing for the holding midfield berth. Tchouameni seems ready to fill Casemiro’s shoes in the long run and should start against Real Betis. Toni Kroos and Luka Modric should be the creative midfielders for Real Madrid.

As for the offensive unit, the only bone of contention will be the selection on the right flank. Rodrygo Goes is pushing for inclusion in the starting eleven, but Ancelotti might give Federico Valverde the nod, considering the threat Real Betis will pose. Karim Benzema will spearhead the Real Madrid attack, with Vinicius Jr. lining up on the left wing. 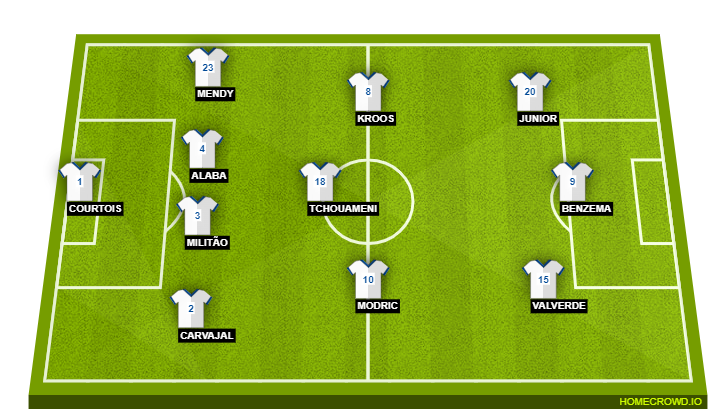 Unlike his counterpart in the Real Madrid dugout, Manuel Pellegrini has a few pressing injury concerns hampering his preparations ahead of the trip to the Santiago Bernabeu. The Real Betis manager will be without four first-team players on Saturday.

William Carvalho is the major absentee for Real Betis, with the Portuguese midfielder failing to recover from a heavy knock he sustained against Osasuna last weekend. Carvalho has joined Martin Montoya (ankle) and Víctor Camarasa (knock) on the sidelines. In addition, German Pezzella will be unavailable as he will serve a suspension following his dismissal last weekend.

Rui Silva should start between the sticks against Real Madrid, with Real Betis likely to line up in a 4-2-3-1 formation on Saturday. Aitor Ruibal has recovered sufficiently from a knock and should start as the right-back, with Alex Moreno picking himself on the opposite flank. Luiz Felipe should replace the suspended German Pezzella, pairing up with Edgar Gonzalez at the heart of the Real Betis defence.

Up ahead in midfield, Andres Guardado should replace the injured Carvalho, starting alongside Guido Rodriguez in the double pivot. Nabil Fekir, who had links with Barcelona on deadline day, will be Real Betis’s third midfielder and will reprise the no. 10 role.

Borja Iglesias has been in fine form in the early days of the 2022/23 season, and the 29-year-old should spearhead the Real Betis attack against Real Madrid. Juanmi and Sergio Canales should support Iglesias from the flanks, with the duo providing the forward thrust and width to the visitors. 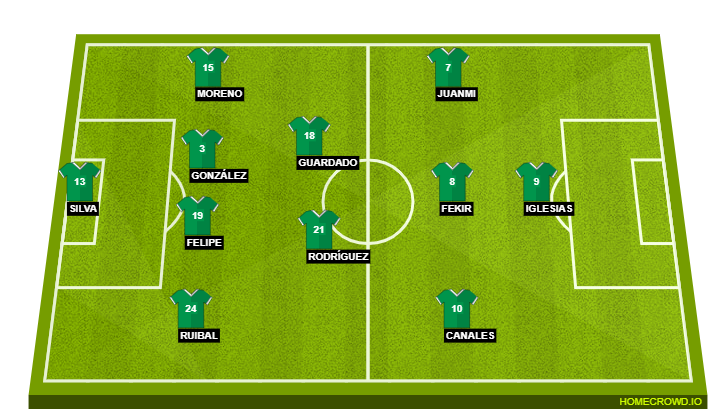 Karim Benzema and Vinicius Jr. continue to go from strength to strength in the early days of the 2022/23 season. Meanwhile, Luka Modric and Toni Kroos are ageing like fine wine. But our Player to Watch in the game between Real Madrid and Real Betis is Aurelien Tchouameni.

The French midfielder has been top-notch since joining Real Madrid from AS Monaco this past summer. And he seems to have the mettle to fill Casemiro’s boots at the Santiago Bernabeu. The game against Real Betis will be another indicator of Tchouameni’s prospects, with the visitors providing him with his first real test as a Real Madrid player. It will be interesting to see how he fares on Saturday.

Real Madrid and Real Betis have been the in-form teams in the early days of the 2022/23 La Liga season. So the match on Saturday is too tough to call, although there will be very little to separate the two teams. The key for Real Madrid will be to keep Real Betis quiet in the first half.

The Verdiblancos have scored four of their six goals in La Liga this season in the first half, netting the most strikes before half-time in the competition thus far in the current campaign. So keeping a lid on Real Betis in the first half might give Real Madrid the chance to pounce later in the game, with Karim Benzema or Vinicius Jr. likely to make the difference again.