West Ham United take on Tottenham Hotspur in the Premier League on Wednesday, and the Hammers will look to build on the recent win over Aston Villa.

West Ham United made a disastrous start to the new Premier League season, losing their first three matches in a row. However, they did well to bounce back with a 1-0 win over Aston Villa, and David Moyes will demand a strong performance from his players against Tottenham.

The West Ham boss has an impressive squad at his disposal, and the Hammers will be expected to challenge for European qualification again this season. They cannot afford to keep dropping points, despite the early stage of the season, and a home win over Tottenham could give them a much-needed confidence boost.

Meanwhile, Tottenham have been quite impressive so far this season, and Antonio Conte will want his side to continue performing at a high level. Spurs have picked up three wins and a draw from four Premier League matches so far, with the only dropped points coming in the stalemate against London rivals Chelsea. Tottenham will hope to pick up three points against an inconsistent West Ham side.

Tottenham showed impressive signs of progress towards the second half of last season, and they will be expected to push the likes of Manchester City and Liverpool for the Premier League title this season.

If Spurs can continue to win games at this stage of the season and build momentum, there is no reason why they cannot sustain a title challenge this season. Antonio Conte has overseen an impressive summer transfer window so far, and it will be interesting to see if summer signing Richarlison is handed his first Tottenham start against West HAm.

West Ham United will be under a lot of pressure heading into this game. The home fans will be expecting a strong reaction from the players against London rivals Tottenham Hotspur, and it remains to be seen whether West Ham can produce a positive result here.

West Ham have lost their last two matches against Tottenham across all competitions, and they have picked up just two wins from the last six meetings against Spurs. They are the underdogs heading into this contest, and it will be interesting to see if West Ham can grind out the all-important three points.

Nayef Aguerd will miss out with an injury here. Meanwhile, Ben Johnson and Aaron Cresswell picked up muscle injuries against Aston Villa, and the duo will be doubts for visit of Tottenham on Wednesday.

Moyes is expected to field a back three of Angelo Ogbonna, Thilo Kehrer and Kurt Zouma. Meanwhile, Vladimir Coufal and Emerson Palmieri are expected to be deployed as the wing-backs. Pablo Fornals, Declan Rice and Tomas Soucek will play in the central midfield, with Jarrod Bowen and Michail Antonio forming the strike partnership for West Ham against Tottenham. 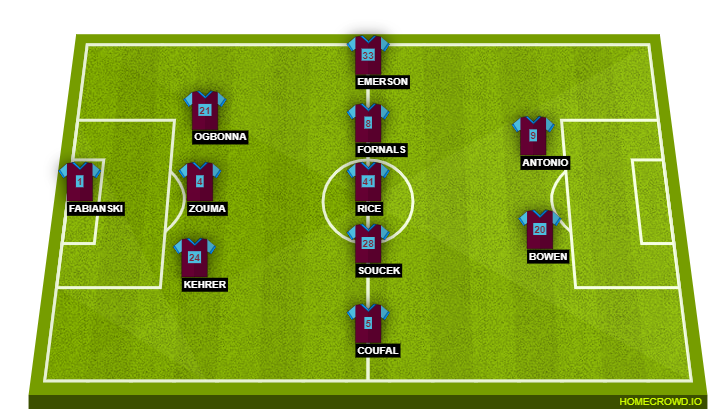 Antonio Conte will be without Lucas Moura for this game. In addition, Tottenham Hotspur will likely take the trip to the London Stadium to take on West Ham United without Cristian Romero and Oliver Skipp.

While the two players have resumed training, they might not be fully fit to feature versus West Ham. Otherwise, Conte has a fully fit squad for the game on Wednesday and will likely field a strong starting eleven in the derby.

? “He can help us a lot this season, we are talking about a player that is a really good addition”

The Tottenham boss is likely to field a back three of Davinson Sanchez, Ben Davies and Eric Dier. Emerson Royal and Ivan Perisic could be used as the wing-backs, with Pierre-Emile Hojbjerg set to partner Yves Bissouma at the heart of the Tottenham midfield.

South Korean international Son Heung-min has not been at his best season, and Richarlison could be given his first start here. The Brazilian international will line up in the final third alongside Harry Kane and Dejan Kulusevski. 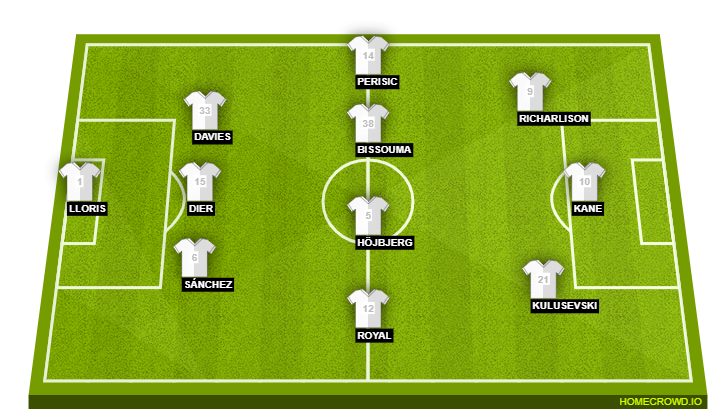 The Brazilian is likely to be handed his first Tottenham start against West Ham, and he will be desperate to prove himself. Richarlison has impressed with his cameos for Tottenham so far, and he knows the opportunity against West Ham is a massive one for him.

With Son Heung-min struggling to recapture his peak form, this could be an opportunity for the ex-Everton talisman to cement his place in the starting eleven. The 25-year-old is a hard-working attacker who will help out defensively as well, and his tendency to play with his heart on his sleeve could be priceless for Tottenham against their bitter rivals.

The Hammers showed some signs of improvement against Aston Villa but they are lacking in confidence and belief right now. West Ham are up against a side that is in red-hot form, and Antonio Conte’s men will be the firm favourites to secure all three points here.

Tottenham have an exceptional squad at their disposal, and they have a number of options who can win the game all by themselves. Spurs should be able to grind out a vital away win here. The Hard Tackle predicts a 2-1 victory over West Ham for Tottenham.