It is still early days in the 2022/23 season, but the stakes remain high across the Premier League table. Gameweek 3 kicks off on Saturday, with Tottenham Hotspur and Wolverhampton Wanderers meeting in the lunch-time kick-off at the Tottenham Hotspur Stadium.

Tottenham’s rebuild under Antonio Conte has continued in the summer transfer window, with Spurs making over half a dozen signings thus far. The north Londoners have started the new season impressively, beating Southampton handsomely in the opening fixture before twice coming from behind to hold Chelsea to a 2-2 draw last weekend.

On the other hand, Wolverhampton Wanderers are closer to the relegation zone than the European spots after managing just one point in their first two games. Wolves started the campaign with a 2-1 defeat to Leeds United before playing out a goalless draw with Fulham last weekend. The two results have left Bruno Lage’s men in the 14th spot on the Premier League table.

The corresponding fixture last season ended in a 2-0 defeat for Tottenham, with Raul Jimenez and Leander Dendoncker finding the back of the net for Wolves. Ahead of the latest meeting between the two sides, The Hard Tackle takes a closer look at the encounter.

Antonio Conte has greeted a mixed bag of updates on the team news front ahead of the visit of Wolverhampton Wanderers. On Saturday, the Tottenham Hotspur manager will be bereft of the services of two first-team players.

Cristian Romero is the latest player to be sidelined after sustaining a muscle injury against Chelsea last weekend. Oliver Skipp is the only other absentee for Tottenham as he continues his recovery from a heel injury. But there is some good news, as Clement Lenglet should be available after overcoming an adductor issue.

However, Lenglet will unlikely make his full debut for Tottenham despite Romero’s absence, with Davinson Sanchez expected to get the nod in the right-sided spot. Eric Dier and Ben Davies will accompany the Colombian defender, with Hugo Lloris a shoo-in between the sticks.

Rodrigo Bentancur and Pierre-Emile Hojbjerg have been tremendously solid in their midfield pairing, so Yves Bissouma should miss out again. Emerson Royal should keep Djed Spence and Matt Doherty out of the side, while Ryan Sessegnon will likely continue as the left wing-back as Conte continues to ease Ivan Perisic into his team.

The offensive unit should also remain unchanged, as Dejan Kulusevski has been impressive in the first two games. Harry Kane and Son Heung-min are automatic picks for Tottenham, so Richarlison has to wait another week to earn his first competitive start for Spurs. 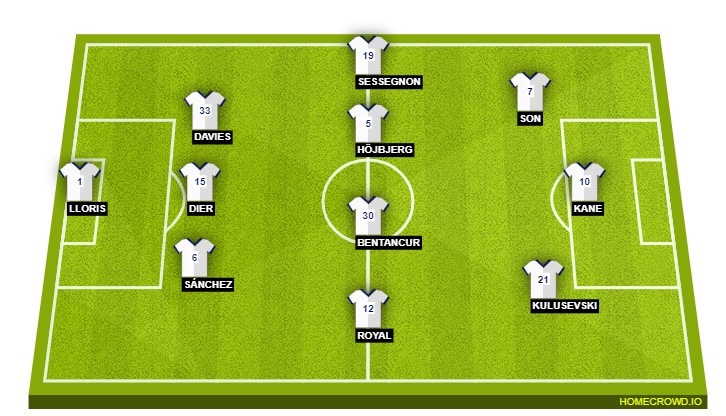 Bruno Lage does not have any new injury concerns hampering his preparations ahead of the trip to the Tottenham Hotspur Stadium. So the Wolverhampton Wanderers manager will remain without three first-team players. But his squad has seen a couple of changes this week due to movements in the market.

Morgan Gibbs-White has left Wolves to join Nottingham Forest, so Lage will have to make one forced change to the starting eleven. The Wolverhampton Wanderers manager has also greeted an arrival this week, with Matheus Nunes joining the Black Country outfit from Sporting CP in a club-record move.

Getting straight to work ? pic.twitter.com/q8c84Lpxaf

Nunes has only trained with his new teammates for two days and might not be ready to start a game for Wolves. So Leander Dendoncker and Ruben Neves should continue in the middle of the park, with Joao Moutinho still unavailable due to an ankle injury.

Chiquinho and Raul Jimenez are the other two absentees for Wolves, so Lage’s offensive options are depleted. But Goncalo Guedes should earn his first start for Wolverhampton Wanderers after making his debut last weekend off the bench.

Guedes should take up the right-wing berth, with Pedro Neto an automatic starter on the left flank. Daniel Podence has looked potent while reprising a no. 10 role and should retain his spot. Hwang hee-Chan picks himself as the central striker in Jimenez’s absence.

The defensive unit will not see any changes, with Jonny Otto and Rayan Ait-Nouri starting as the two full-backs. Nathan Collins and Max Kilman have forged a solid central defensive partnership, and Lage will continue with the duo, while Jose Sa has nailed down his spot as Wolves’ first-choice goalkeeper. 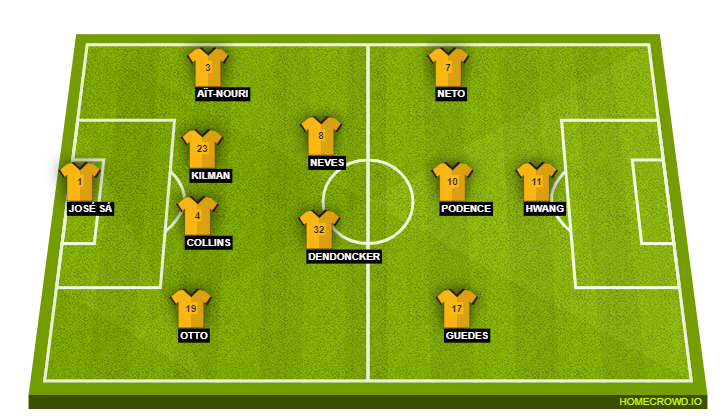 Harry Kane and Son Heung-min have not been entirely fluent in the opening two fixtures despite showing some promising signs. But while the Tottenham talismans are yet to get going fully, Eric Dier is the player to watch in this game due to Cristian Romero’s absence due to an injury.

With Romero unavailable, Dier will bear more responsibilities at the back, especially with Davinson Sanchez exposed to the electric Pedro Neto. The English international has rediscovered his best form in the back three that Antonio Conte has deployed at Tottenham. And he will help Tottenham come through unscathed if Dier is at his best against Wolves.

Wolverhampton Wanderers might have struggled to trouble the scorers thus far this season. But Bruno Lage has game-changing attackers in his team, and they should give Tottenham a run for their money at the Tottenham Hotspur Stadium on Saturday afternoon.

The home team has won only one of the last 11 Premier League fixtures in recent meetings between Tottenham and Wolves, with the visiting side prevailing in both meetings in the 2021/22 season. But Tottenham should be too strong for Wolves on Saturday, with Harry Kane breaking another record while guiding the north Londoners to a win.