Republic of Ireland will welcome Scotland to the Aviva Stadium in Dublin for their third 2022/23 UEFA Nations League encounter.

Republic of Ireland were on an eight-match unbeaten streak before suffering back-to-back losses to open their 2022/23 UEFA Nations League campaign. Scotland, on the other hand, have won their only match so far in the competition, a 2-0 win over Armenia.

Ireland fell 1-0 to Armenia in their opening match of the campaign before losing to Ukraine in their last encounter by a similar margin. The two defeats have left them at the bottom of Group B1, and they now need favourable results in their remaining encounters to move up the standings.

Scotland, meanwhile, are sitting pretty at the top of the group table. Anthony Ralston and Scott McKenna’s first-half strikes were enough for Steve Clarke’s side to get all three points to start their Nations League campaign on a high.

Scotland now have two important group matches coming up as they look to solidify their spot at the top of the standings. They face Republic of Ireland first on June 11 before the return fixture against Armenia on June 14.

Scotland are on a hot run of form as well with just one defeat in their last ten encounters, which came against Ukraine in the FIFA World Cup qualifiers. They responded brilliantly to the disappointment against Ukraine with a win over Armenia and will want to continue in a similar vein when they take on Ireland.

Stephen Kenny could be without centre-back John Egan who had to come off injured in Ireland’s previous encounter against Ukraine. The Republic of Ireland head coach is also hoping for Seamus Coleman to gain full fitness ahead of the encounter, but there is still a big question mark over his availability.

Kenny is expected to continue with a 3-4-3 that he employed against Ukraine as well but there could be some alterations to the XI that started the last match. Most notably, Swansea City’s Michael Obafemi could start in attack.

Liverpool’s Caoimhin Kelleher will start as the goalkeeper with a back three of Nathan Collins, Shane Duffy and Dara O’Shea, who is expected to come in for Egan, protecting him. Cyrus Christie and Enda Stevens will most probably retain their respective wing-back spots.

Jeff Hendrick and Josh Cullen will form the double pivot with the attacking trio of Callum Robinson, Obafemi and Jason Knight doing the damage up front. 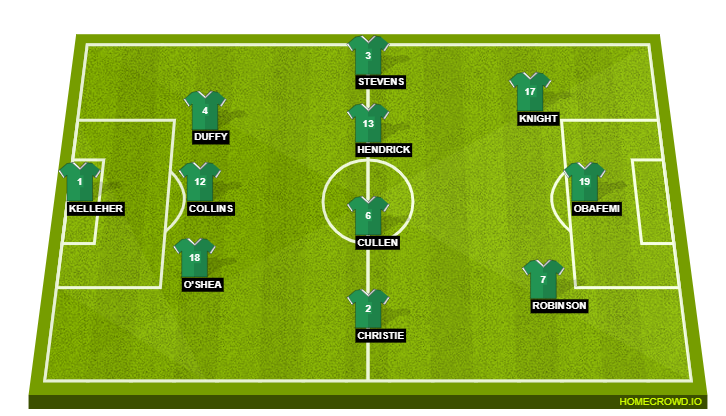 Scotland head coach Steve Clarke employs a similar system to his Republic of Ireland counterpart, Stephen Kenny. Manchester United’s Scott McTominay could get a look-in for this encounter, but he is only expected to start as part of a back-three.

Liverpool left-back Andrew Robertson could be given a rest but gauging the importance of this match-up, it is unlikely that Clarke will take such a step. Aaron Hickey could replace Robertson if the latter is made to start on the bench, especially after a gruelling season with the Reds.

Back on the pitch ⚽️

The squad took in one last training session at @Oriamscotland before travelling to Dublin for tomorrow's UEFA Nations League match.#IRLSCO pic.twitter.com/qGTpPBm79m

There are not expected to be wholesale changes to the side that started against Armenia, with Craig Gordon expected to take up the goalkeeping spot. McTominay could come in for John Souttar to form a back three with Jack Hendry and Scott McKenna.

Obafemi is expected to start in the attack for Republic Ireland after a decent season in the EFL Championship. He scored 12 league goals for Swansea City in the 2021/22 campaign. Expect him to be heavily involved in his team’s attacks should he get some time on the pitch.

Both the teams look very well-matched on paper, and despite coming into the encounter with contrasting results last time out, we expect them to play a closely-fought encounter. The Hard Tackle predicts an exciting match that could finish level with both the teams scoring one goal apiece.