France could have the chance to book their place in the UEFA Euro 2020 Round of 16 when they take on Hungary at the Puskas Arena in a Group F tie on Saturday.

The curtains are set to drop on Matchday 2 of the group stage at UEFA Euro 2020 this weekend, with the Group F fixtures once again bringing a round of fixtures to a close. The action on Saturday begins in Budapest, where Hungary will play hosts to France at the Puskas Arena, hoping to get their first points on the board.

Hungary put in a valiant effort in their opening fixture at UEFA Euro 2020, admirably keeping the formidable Portugal side at bay for the most part. However, a late collapse proved to be their undoing, as three goals in quick succession condemned Marco Rossi & co. to an undeserving 3-0 defeat, ending their 11-game unbeaten run in the process.

France, on the other hand, were thoroughly professional in their maiden game at UEFA Euro 2020, comfortably keeping out Germany throughout the course of the 90 minutes, although they were fortunate to win the game with the help of a Mats Hummels own goal. Les Bleus are now on an eight-game run without defeat, dating back to November 2020.

France were 2-1 winners the last time they locked horns with Hungary, in an international friendly back in 2005. Ahead of the latest meeting between the two sides, The Hard Tackle takes a closer look at the encounter.

Marco Rossi does not have any fresh injury concern hampering his preparations ahead of the visit of France. On Saturday, the Hungary head coach will have a full strength squad at his disposal, with Dominik Szoboszlai’s absence the only major hurting point for the Magyarok.

Peter Gulacsi was rock solid in goal against Portugal and did not really deserve to end up on the losing side. Against France, the 31-year-old will once again take his place in goal for Hungary, who will line up in a 3-5-2 formation once again.

In front of Gulacsi, the three-man central defensive unit ought to comprise of Endre Botka, Willi Orban and Attila Szalai, with the trio set to be tasked with remaining compact in order to deny Karim Benzema and Kylian Mbappe the required space to torment Hungary with their power and movement.

The wing-backs will often drop deep to create a back five during the defensive phases, and to that end, Attila Fiola and Gergo Lovrencsics will need to be disciplined with their performance. In the middle of the park, keeping a lid on the output of Paul Pogba and Antoine Griezmann, which is why Adam Nagy will look to keep things tight in the middle of the park along with Laszlo Kleinheiser and Andras Schafer.

Finally, the strike partnership will be formed by Roland Sallai and Adam Szalai, with the duo also putting in the hard yards when off the ball in order to put more men in behind the ball, forming the first line of press for Hungary against France. 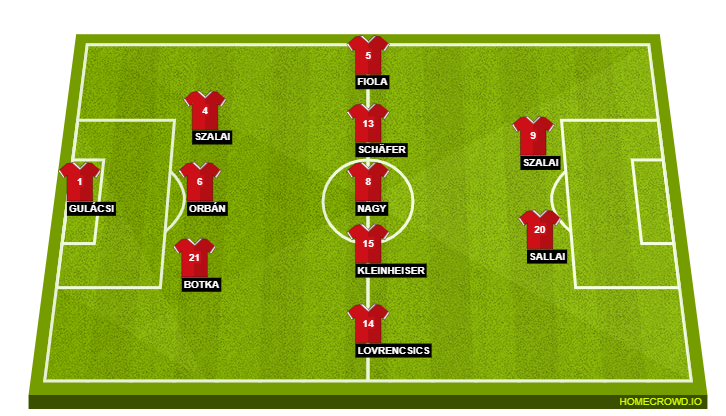 Like his counterpart in the Hungary dugout, Didier Deschamps has not had any casualties from his side’s UEFA Euro 2020 opener. On Saturday, the France head coach will have a fully fit squad to choose from and is unlikely to make any changes to the side that beat Germany last time out.

Captain Hugo Lloris will once again have a four-man defensive unit providing cover for him, with France being set up in a 4-3-1-2 formation against Hungary. This system will be shuffled when any of the three first-choice forwards get taken off, with the possible introduction of Kingsley Coman and Ousmane Dembele among others.

Karim Benzema and Kylian Mbappe will form the striker partnership for France, playing off of each other depending on the situation of the game. Antoine Griezmann will be the third man in attack for France, with the 30-year-old likely to be the difference maker with his ghosting runs.

In midfield, Paul Pogba was in a league of his own against Germany and will once again hold the key with his all-round abilities in the middle of the park. The 28-year-old will have N’Golo Kante and Adrien Rabiot as his midfield partners, with Rabiot’s offensive output likely to determine how the balance get tilted against a resolute Hungary side.

Finally, there is no looking past Raphael Varane and Presnel Kimpembe at the heart of France’s defence, with Benjamin Pavard and Lucas Hernandez being the two full-back against Hungary. 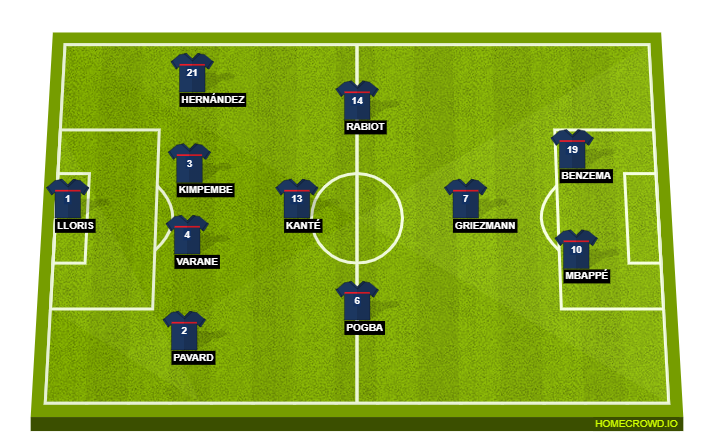 Portugal was one tough test for Hungary and Willi Orban played a key role in ensuring that the Magyarok nearly came unscathed from the match. It does not get any easier for Hungary, with France being equally formidable in the final third, if not more than Portugal.

Therefore, while Peter Gulacsi is likely to be kept busy by the French attack, how Orban manages to keep the backline organised will go a long way in determining whether Hungary can frustrate Les Bleus. The 28-year-old will also hope to keep that odd mistake out of his game despite the torment that will be Karim Benzema and Kylian Mbappe’s movement.

Speaking of, Benzema will be raring to go on Saturday as he looks to break his duck at UEFA Euro 2020. Having made his return to the French national side after six long years, the veteran striker is sure to be itching to find the back of the net, with his last goal for France at a major international tournament coming 2542 days ago.

The 33-year-old seemed to be in his elements last time out and backing that up with a goal will be imperative as France approach the knockout stages of the tournament. Therefore, this is quite an important outing for Benzema, as he looks to mark his comeback with a glut of goals.

Hungary have really drawn the shortest straw after being drafted into Group F of UEFA Euro 2020. And Marco Rossi’s charges will once again put men in behind the ball to stand a chance of beating France. As for Les Bleus, it will be a game of patience for Didier Deschamps & co. although they will also be eager to find their scoring boots to kick-start their campaign.

Like Hungary’s Matchday 1 fixture, the first half ought to be goalless once again, with the hosts looking to hit France on the counter. Early in the second half, though, the breakthrough should finally come, with Karim Benzema likely to end his drought. The Hard Tackle, to that end, predicts a 2-0 win for France, in a result that could confirm their place in the Round of 16.