England will be aiming to book their place in the UEFA Euro 2020 Round of 16 when they welcome neighbours Scotland to Wembley for a Group D tie on Friday.

The midway point of the group stage of UEFA Euro 2020 is nearly upon us and the qualification picture for the knockout phase is slowly starting to get clearer. On Friday night, the action on the day will be rounded off with a potentially intriguing battle between neighbouring nations, as England play hosts to Scotland at Wembley in a Group D clash.

England come into the tournament only as one of the outside contenders to go all the way instead of resounding favourites, and that is largely down to the Three Lions flattering to deceive despite boasting world class individuals in every department. This was evident in their UEFA Euro 2020 opener against Croatia, as they only managed a 1-0 win despite dominating the proceedings.

Scotland, on the other hand, began their UEFA Euro 2020 campaign with a disappointing defeat at home. Playing hosts to Czech Republic at Hampden Park, the Tartan Army went down 2-0 despite the best efforts of captain Andrew Robertson, who has created the most chances in a game by any player so far in the tournament.

Things do not get any easier now for Steve Clarke & co. in spite of the fact that England were sub-par last time out, with the Three Lions still quite a formidable unit. The last clash featuring the two neighbours ended in a 2-2 draw in a FIFA World Cup 2018 qualifier, with Harry Kane among those on target. Ahead of the latest meeting between the two sides, The Hard Tackle takes a closer look at the encounter.

Gareth Southgate had already lost one player to injury ahead of the start of England’s UEFA Euro 2020 campaign, with Trent Alexander-Arnold pulling out. The England head coach has now lost another squad member, with Dean Henderson withdrawing his name from the squad due to a hip complaint.

In his stead, Aaron Ramsdale has been called up by Southgate, with the 23-year-old set to be the third-choice goalkeeper behind Jordan Pickford and Sam Johnstone. Pickford should indeed retain his spot in goal for England, who will line up in a 4-2-3-1 formation once again versus Scotland.

This time around, though, he is unlikely to continue with the left-back experiment he had put in place against Croatia, with Kieran Trippier moving to the right-back slot while the vacated left-back position could be filled by Luke Shaw. Tyrone Mings and John Stones once again pairing up at the heart of England’s defence, with Harry Maguire being given even more time to regain full fitness.

Like Maguire, Jordan Henderson is expected to miss out once again as well, although in his case, his absence has been forced by the resounding display by Kalvin Phillips last time out. Phillips will line up alongside Declan Rice in the midfield double pivot, with the 25-year-old being tasked with pressing the Scotland players intensely when off the ball.

Phil Foden got the nod ahead of Marcus Rashford, Jack Grealish and Jadon Sancho in the opener, and the prodigious attacker ought to take his place in the final third again. So should Mason Mount and Raheem Sterling, who has earned a start against Scotland after a solid display in the previous game. Finally, Harry Kane will lead the line for England, with Sterling essentially playing off of him. 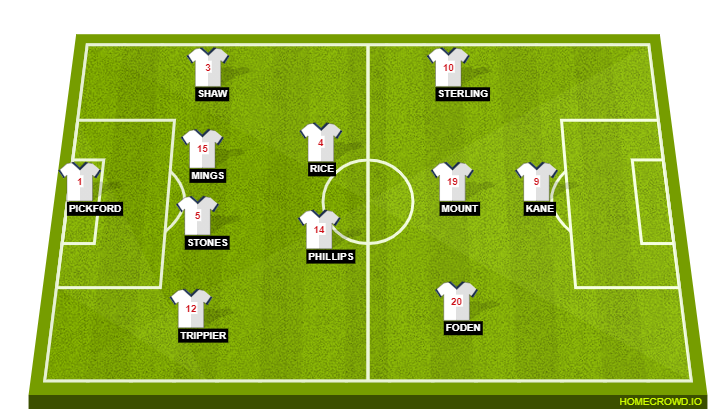 Unlike his counterpart in the England dugout, Steve Clarke has not been forced to release a player from his squad yet. The Scotland boss is only sweating over the fitness of one squad member, with Kieran Tierney recovering from a calf injury.

In his latest update, Clarke hinted at Tierney possibly missing out against England, with the player himself branding his availability as “touch and go”. With that in mind, it is likely that he will miss out versus England despite the importance of the fixture, meaning Liam Cooper will get another start, although Tierney will return if deemed to be fit enough.

Kieran Tierney on whether he'll be fit to face England on Friday:

"It's touch and go. A decision will probably be made tomorrow afternoon or even on Friday before the game." #SCO #ENG pic.twitter.com/qbfN69PvxZ

The rest of the two centre-backs pretty much pick themselves, with Jack Hendry sitting alongside veteran defender in the three-man central defensive unit. David Marshall made a few big saves in the previous game but still fell prey to Patrik Schick’s wondrous strike. The 36-year-old will keep hold of his spot between the sticks, with Scotland once again being set up in a 3-5-2 formation.

As iterated earlier, Andrew Robertson is the player to have created the most chance in a game so far with six. The Scotland captain will once again hold the key from the left wing-back slot, with Kieran Trippier having a big challenge on his hands. On the right flank, Stephen O’Donnell will be the more defensive of the two wing-backs.

In midfield, Callum McGregor is likely to be recalled, with Stuart Armstrong making way. The return of McGregor will release Scott McTominay into the box-to-box midfield role, like John McGinn, who will take up even more advanced positions. McGregor will, therefore, sit at the base of the midfield, looking to keep a check on Mason Mount.

Finally, the strike partnership should have a brand new look after disappointing performances by Lyndon Dykes and Ryan Christie. In their stead, Kevin Nisbet and Che Adams could get a chance to make their mark, and the duo will hope for better service this time out from players other than Robertson. 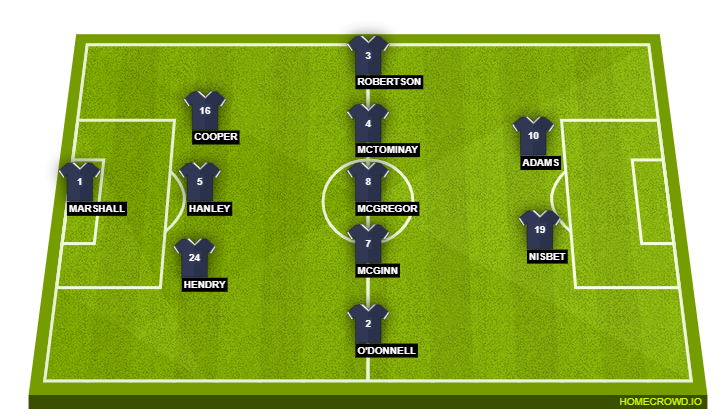 Raheem Sterling was pleasantly surprising with his performance against Croatia, with the 26-year-old once again proving that he is a different quantity altogether when he dons the England strip. However, one player whose performance posed a concern was Harry Kane.

A goal machine in every sense of the way, Kane revels in his end product as well as being heavily involved in his team’s attacking moves. That did not prove to be the case in the opener, with the England captain often cutting a peripheral figure. That has to become a thing of the past against Scotland, and Kane will be raring to get going belatedly.

If Kane is in his elements on Friday, then one player whose performance will be under the spotlight is David Marshall. The veteran goalkeeper was quite solid with his shot-stopping against Czech Republic but was undone by two marvellous finishes by Patrik Schick.

Against England, Marshall will once again need to be at his very best in order to not just thwart Harry Kane, but each of his other attacking partners as well, who will all test him quite regularly. A big game beckons for Marshall, whose display in goal will determine whether Scotland can stay alive in the competition.

Scotland might be coming off a demotivating defeat against Czech Republic, but they ought to be an even trickier opponent than Croatia for England. With pride of the derby at stake as well, this has the makings of becoming an explosive contest, with Andrew Robertson once again likely to be an inspiring figure for his teammates.

However, England will once again snuff out the moves of their opposition with aplomb, with Kalvin Phillips expected to shine again. In the final third, Harry Kane should once again arrive at the party with at least one goal. With that in mind, The Hard Tackle predicts a hard-fought 2-0 win for Gareth Southgate & co.