Scotland and Czech Republic will kick-start their campaign at UEFA Euro 2020 on Monday when they face off at Hampden Park in a Group D tie.

The UEFA Euro 2020 might only be in its nascent stage, but there has been no shortage of action so far. The last of the Matchday 1 fixtures will be played this coming midweek, and the second Group D clash will feature Scotland and Czech Republic at Hampden Park in a lunch-time kick-off on Monday.

Scotland needed to take the more scenic route to make it to UEFA Euro 2020, but they did manage to prevail through the playoffs stage of the qualification process. The Tartan Army have been in fine nick in 2021 and are unbeaten in their five games so far this year, producing solid displays against Netherlands and Austria while also beating Luxembourg 1-0 in their most recent game.

Czech Republic, on the other hand, claimed an automatic qualification berth after finishing runners-up in their group behind England. The Narodak have now been reunited in the group stage with the Three Lions again, in what is a tricky group for them. Jaroslav Silhavy & co. have not been in the best run of form heading into the Euro, although they did win their most recent game (3-1 against Albania).

Scotland were 1-0 victors the last time they locked horns with Czech Republic, with Ryan Fraser scoring the only goal in the game. Ahead of the latest meeting between the two sides, The Hard Tackle takes a closer look at the UEFA Euro 2020 encounter.

Steve Clarke has not made many alterations to the squad he had picked in the first international break of the year and has retained his core for UEFA Euro 2020. The notable absentees for Scotland are Liam Palmer, Kenny McLean and Oliver McBurnie.

Meanwhile, the likes of Billy Gilmour, David Turnbull and Nathan Patterson have all received their maiden call-ups to the national side and are a part of the 26-man squad. Clarke ought to set his team up in a 3-5-2 formation, with veteran goalkeeper David Marshall taking his place between the sticks.

The 26 players picked to represent Scotland at UEFA #EURO2020. pic.twitter.com/uV5epmAEJc

In front of Marshall, Jack Hendry, Kieran Tierney and veteran centre-back Grant Hanley should take their places in the three-man central defensive partnership. Captain Andrew Robertson will be one of the two wing-backs, whose objective will be to send in dangerous crosses while also pushing back to create a back five in the defensive phases to snuff out space for Czech Republic.

Stephen O’Donnell will be the other wing-back, with the two wide men flanking John McGinn, Scott McTominay and Callum McGregor. McGregor will sit at the base of the three-man midfield unit, with McTominay and McGinn providing defensive support while also bringing on the forward thrust from the middle of the park.

Finally, Che Adams and Lyndon Dykes will form the strike partnership for Scotland, with the duo aiming to be camped inside the Czech Republic box whenever Scotland push forward. The likes of Ryan Fraser, James Forrest and Stuart Armstrong will be options if Clarke aims to change up his formation midway through the game. 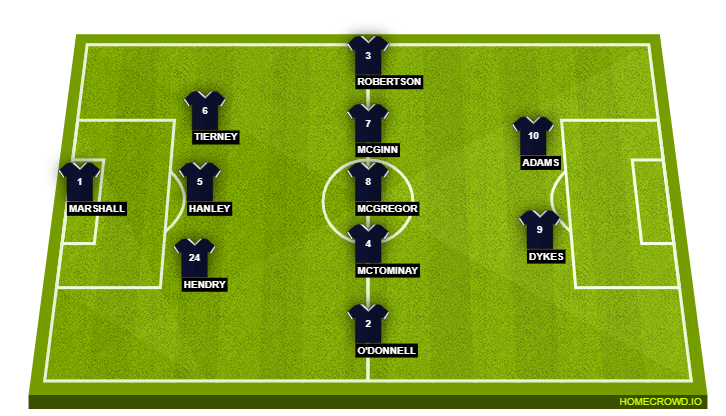 Like his counterpart in the Scotland dugout, Jaroslav Silhavy has not thrown up many surprises when selecting his squad for UEFA Euro 2020. However, the Czech Republic head coach has been forced to make one late change, with Jiri Pavlenka withdrawing due to a back injury.

In place of the 29-year-old goalkeeper, Tomas Koubek has been drafted in to be the third goalkeeper in the squad. Pavlenka’s injury means Tomas Vaclik is almost a certainty to start in goal for Czech Republic, who will likely be set up in a 4-2-3-1 formation against Scotland.

The Czech national team travelled to Scotland for the opening match of UEFA #EURO2020 without goalkeeper Jiří Pavlenka and he left the EURO squad due to a back injury.

Tomáš Koubek (@KoubekTom) will join the team after the match against Scotland. pic.twitter.com/XdBcR5PmtU

The key in defence for the Czech Republic will be to remain compact to force Scotland wide and make their attacking moves more one dimensional. Hence, the full-backs Vladimir Coufal and Jan Boril will make the defensive shape more narrow, providing support to Ondrej Celustka and Tomas Kalas at the heart of the backline.

Coufal and Boril, though, will also have a big role to play during build-up play, as their presence in the final third will allow the two wingers – likely to be Lukas Masopust and Jakub Jankto – to veer infield and create overloads in the central areas in order to put pressure on Scotland’s centre-backs.

As for the midfield, Tomas Soucek and Alex Kral will aim to hold the fort and keep things tight in the middle of the park. Keeping a check on John McGinn, in particular, will also be critical as the 26-year-old has the tendency of making ghosting runs, which can put the opposition defence under intense pressure.

Captain Vladimir Darida will be the third midfielder for Czech Republic, with the 30-year-old taking up advanced positions on the pitch and providing the creative impetus high up. Darida will play off of Patrik Schick, who will need to be at his absolute best to trouble David Marshall in the Scotland goal. 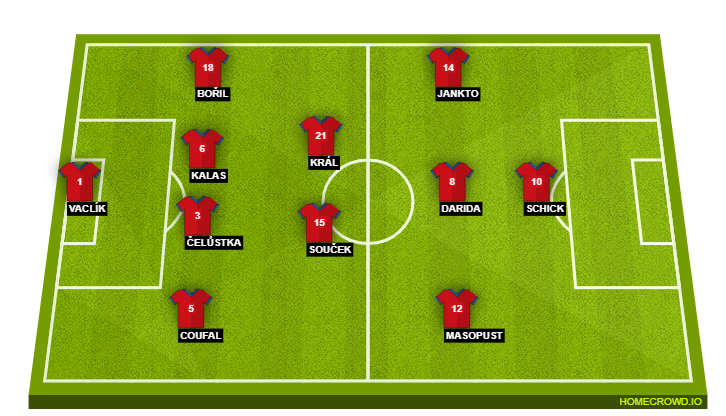 The Scotland squad has quite a few superstar players who represent some major clubs in the Premier League. However, it is John McGinn who will be pivotal for the Tartan Army on Monday against Czech Republic as his output on the day will determine which way the crucial midfield battle swings.

At the same time, it will also be important that he produces his trademark late ghosting runs into the opposition box, which will then take some of the goalscoring burden off of the two strikers. A big-game player, this will be a major test of McGinn’s ability in what is his maiden international tournament.

Just as McGinn will be looking to make a splash in his bow at a major international level, Soucek is also making his debut at the big stage. Like McGinn, Soucek is also coming off a superb season at club level with West Ham United, and he will aim to carry his form forward into UEFA Euro 2020.

Against Scotland, Soucek will have the task of keeping things tight in the middle of the park, and such an outlook will often pit him directly with McGinn. Who comes out on top in this key battle will, in turn, go a long way in determining the final result of the game. A big outing beckons Soucek.

Scotland might be relatively more inexperienced than Czech Republic when it comes to UEFA Euro participation, but the fact that they will be playing this game at home puts them at an advantage. A raucous Hampden Park is sure to spur on Steve Clarke’s men, who have been moving in the right direction in recent years.

Czech Republic should carry a fair bit of threat during transitions, but in Patrik Schick, they have a striker who is far from clinical. Scotland, on the other hand, have an in-form Che Adams in the squad, while John McGinn will pose a great deal of threat as well. With that in mind, The Hard Tackle predicts a 2-0 win for Scotland to possibly go level on points with England ahead of their Matchday 2 clash.