Belgium will kickstart their preparations for the UEFA Euro 2020 when they welcome Greece to the King Baudouin Stadium in Brussels on Thursday.

The UEFA Euro 2020 is less than ten days away, but before that, a number of friendlies have been scheduled as a means for the teams to get warmed up. One of the favourites to go all the way, the top-ranked team in the world, Belgium will look to get into the groove when they play hosts to Greece at the King Baudouin Stadium on Thursday night.

Belgium have been nigh on unstoppable over the last three years, losing just twice since their ouster in the FIFA World Cup semi-finals against France. They were particularly imperious during their qualification campaign for Euro 2020, winning each of their 10 games to cruise to the group stages, while their three games so far in 2021 has seen them win two and draw one game.

Greece, on the other hand, have missed the boat to the UEFA Euro 2020, with their qualification campaign being a dismal one early on – four defeats in their first seven games – which meant that a late charge came too little too late. Since the resumption of football in 2020, though, the Piratiko have been a hard team to beat, although they have only managed to win five of the ten games in the said period.

Belgium eked out a narrow 2-1 win the last time they locked horns with Greece, in what was a FIFA World Cup 2018 qualifying fixture. Ahead of the latest meeting between the two sides, The Hard Tackle takes a closer look at the encounter.

Roberto Martinez has hardly sprung any major surprises in his announcement for the squad that he taken to UEFA Euro 2020. The only notable absentees for Belgium, in fact, are Koen Casteels, Adnan Januzaj, Alexis Saelemaekers and Divock Origi, none of whom were expected to make a splash anyway.

There is a mixed bag of news on the team news front, though, as Eden Hazard is a part of the squad and will hope to remain fit throughout the tournament to lead by example. However, Axel Witsel is recovering from an Achilles injury that is likely to keep him out till the final group game at the finals.

In addition, Kevin De Bruyne is also out for a couple of weeks, with Martinez confirming that the vice-captain will miss the first game of the Euros. It has also been confirmed that Hazard, Thomas Vermaelen and Jan Vertonghen will play no part against Greece, but will line up for Belgium versus Croatia in their second and final friendly.

Simon Mignolet is a confirmed starter in goal for Belgium, who will be set up in their typical 3-4-3 formation. In front of the veteran goalkeeper, Toby Alderweireld will be the only regular defender to take his place in the three-man central defensive unit, with Jason Denayer and Dedryck Boyata being his partners at the back.

The race for the two wing-back slots is intensifying and on Thursday, Timothy Castagne and Thorgan Hazard are likely to be lining up out wide for Belgium, with Thomas Meunier and the in-form Yannick Carrasco getting their chance next time out against Croatia.

Youri Tielemans will hold the key on the creative front for Belgium, providing the forward thrust from the middle of the park, with Leicester City teammate Dennis Praet being his partner in the middle of the park. Meanwhile, Romelu Lukaku ought to be given a breather as well, with Christian Benteke set to lead the line against Greece, while Leandro Trossard and Jeremy Doku will provide the support act. 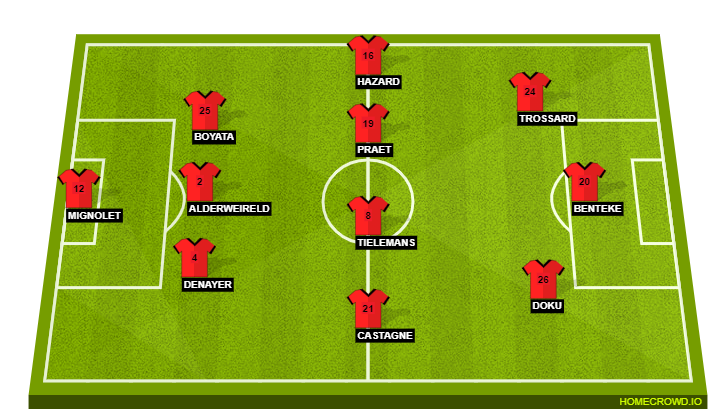 Unlike his counterpart in the Belgium dugout, John van’t Schip has made wholesale changes to the squad that was picked in the previous international break, with the likes of Kostas Fortounis, Giorgos Giakoumakis and Dimitris Limnios not making the cut.

However, Konstantinos Mavropanos is among the players who have been rewarded for a strong season, with the young defender being in contention to feature against Belgium. The 23-year-old should indeed feature at the heart of Greece’s defence, with Kyriakos Papadopoulos being his partner.

Michalis Bakakis and Dimitris Giannoulis will likely be the two full-backs for the visitors, with Odysseas Vlachodimos taking his place between the sticks. In front of the 27-year-old goalkeeper, Greece will line up in a 4-2-3-1 formation, with Zeca and Andreas Bouchalakis being the two central midfielders, who will aim to hold the fort in the middle of the park.

Up ahead in attack, captain Tasos Bakasetas will reprise the no. 10 role, hoping to pull the strings higher up the pitch whenever afforded the chance to do so. Giorgos Masouras and Christos Tzolis will be the two wide men, while Vangelis Pavlidis will lead the line for Greece against Belgium. 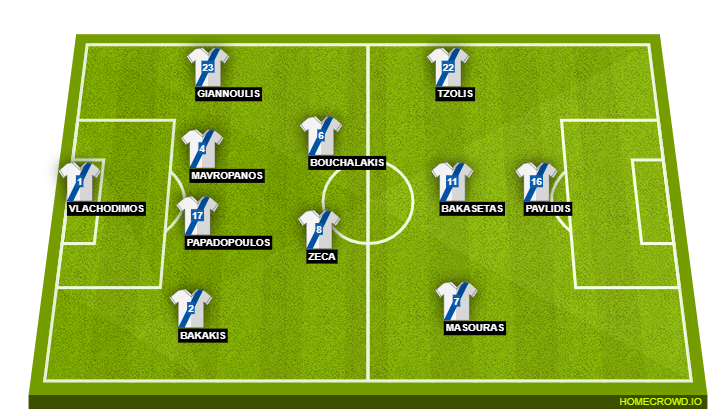 In a team that will be highly rotated, the spotlight will invariably be on players who will be looking to nail down their spots or make an impression to go some way in usurping the competition. One player in such a predicament is Thorgan Hazard.

With Yannick Carrasco enjoying a solid season with Atletico Madrid, the 27-year-old ought to be the favourite for the left wing-back spot. However, a solid showing in the build-up to UEFA Euro 2020 will go a long way in helping the Borussia Dortmund star to convince Roberto Martinez that he is the right man for the job. A big game, therefore, beckons Hazard this midweek.

Greece have historically been a difficult opponent for Belgium. And, with the Red Devils set to make a few rotations, the visitors will certainly be in the game. However, the likes of Jeremy Doku, Leandro Trossard and Thorgan Hazard ought to make a big impression here, inspiring Belgium to a 3-1 win.