Atalanta will be aiming to consolidate their place in the Serie A top four when they take on Genoa at the Luigi Ferraris Stadium on Saturday.

The 2020/21 season is in its twilight, and in Italy, the top four race in Serie A is wide open, as the penultimate round of fixtures gets underway. The first match of the weekend will feature one of the most eye-catching teams in Europe, as second-placed Atalanta lock horns with Genoa at the Luigi Ferraris Stadium on Saturday afternoon.

Genoa have endured a difficult 2020/21 season wherein they have flirted with relegation. However, after the win over Bologna last time out, Il Grifone have secured their status as a top-flight team for a 14th successive season, although ahead of the visit of Atalanta this weekend, Davide Ballardini & co. will hope to improve their home form after picking just eight points from the available 21 at home in recent times.

Atalanta, on the other hand, have been one of the form teams in Serie A for quite some time now, with their last defeat in the competition coming back in March. Since then, La Dea are on a ten-game unbeaten streak, with this run of results propelling them up to second on the table and in the driver’s seat to clinch a top four finish. However, with little room for slip-ups, Gian Piero Gasperini & co. must keep their foot on the gas.

The reverse fixture, played at the Gewiss Stadium back in January, was a drab affair that ended in a goalless draw, in a game that had just five shots on target. Ahead of the latest meeting between the two sides, The Hard Tackle takes a closer look at the encounter.

Davide Ballardini has a few pressing injury concerns hampering his preparations ahead of the visit of Atalanta. On Saturday, the Genoa manager will be bereft of the services of as many as five first-team players due to various issues.

The major absentee for Genoa is star striker Gianluca Scamacca, who is out with an unspecified issue. Apart from the 22-year-old, the likes of Davide Biraschi (muscle injury), Domenico Criscito (calf), Luca Pellegrini (hamstring) and Milan Badelj (muscle injury) have missed the cut in the matchday squad due to their respective fitness issues.

The absence of Scamacca is particularly concerning, and his void is likely to be filled by Mattia Destro, who will line up in the strike partnership alongside Eldor Shomurodov. Another key position to be filled is at the base of the midfield, where Nicolo Rovella is likely to come in for Badelj.

The 19-year-old should have Kevin Strootman and Miha Zajc for company in the middle of the park while Davide Zappacosta and Paolo Ghiglione will be the two wing-backs. The duo will have a lot of responsibility on their shoulders as they will need to provide width in the final third while also giving support to the three centre-backs – Edoardo Goldaniga, Andrea Masiello and Cristian Zapata – while Mattia Perin will be stationed in goal. 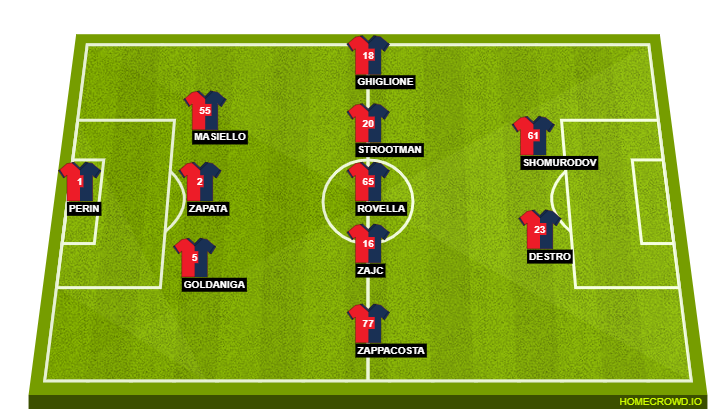 Like his counterpart in the Genoa dugout, Gian Piero Gasperini is not missing the services of any key player ahead of the trip to the Luigi Ferraris Stadium. In fact, on Saturday, the Atalanta manager will have a full-strength squad at his disposal, with Rafael Toloi back from a muscle injury.

The return of Toloi could signal a return to the oft-preferred 3-4-1-2 formation, with Toloi, Cristian Romero and Jose Luis Palomino forming the three-man central defensive unit. In goal, there is no looking past Pierluigi Gollini.

? C'è anche Rafa #Toloi tra i nerazzurri in viaggio per Genova!
? Toloi back in the travelling squad for #GenoaAtalanta!

Hans Hateboer and Robin Gosens will be the two wing-backs for Atalanta, with the duo having the responsibility on them to provide dangerous deliveries in the final third. In the middle of the park, the onus will be on Marten de Roon and Remo Freuler to keep a lid on the moves that Genoa look to engineer, while also recycling possessions smartly.

The creative duties, though, will largely rest on the shoulders of Ruslan Malinovskyi, who has been a shining light for Atalanta lately. Duvan Zapata and the in-form Luis Muriel will form the strike partnership. 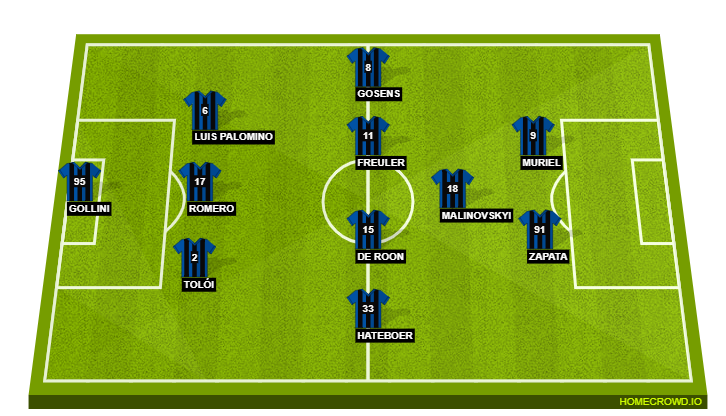 ? Luis Muriel has played a direct hand in 20 league goals as a substitute since the start of last season, at least eight more than any other player in Europe's top 5 leagues pic.twitter.com/x121k7OtX4

Around nine months ago, whenthe Serie A season was in its inception, few could have predicted Luis Muriel being a key figure for Atalanta, let alone establish himself as one of the very best on show this term. After all, the likes of Duvan Zapata, Josip Ilicic and the now-departed Papu Gomez had all become cult heroes last season, meaning Muriel was largely an afterthought.

However, it goes without saying that the Colombian has been one of the pleasantly surprising success stories in Serie A. And, if Atalanta are to end their campaign on a high, it is Muriel who will need to be at his very best especially against a Genoa side that can be tricky to deal with. Can he continue his fine run of form?

Genoa have it in them to catch Atalanta by surprise here. After all, after having secured their Serie A stature, Il Grifone can now play without any pressure, which makes them tricky customers. However, Atalanta have been relentless in 2021 and this game should be no different, with the visitors going on to grab a potential top four-clinching 3-1 win here.