Manchester United will be aiming to all but confirm their place in the top four of the Premier League when they take on Aston Villa at Villa Park on Sunday.

We are in the final stretch of the 2020/21 season and the games are coming thick and fast across Europe. In the Premier League, Gameweek 35 is underway, with four matches on show on Sunday. And, the second game of the day will be played at Villa Park, where Aston Villa will play hosts to Manchester United.

Aston Villa have enjoyed a solid 2020/21 campaign which could well end with a top half finish, considering they have a game in hand over those around them. The Villans, though, have quite a daunting run-in, with Manchester United, Tottenham Hotspur and Chelsea among their remaining opponents. Dean Smith & co. did grab a crucial 2-1 win over Everton last week, but that is their only success in four outings.

Manchester United, on the other hand, have had an eventful fortnight or so, having been involved in the inception of the infamous disaster that has been the European Super League before reaching the UEFA Europa League final with the help of an aggregate 8-5 win over AS Roma.

There has also been the small matter of fans breaking into Old Trafford, which has, in turn, created a fixture pile-up that will see the Red Devils play three Premier League games in a span of just five days. Manchester United, though, are pretty much guaranteed to finish second in the top-flight, especially following Leicester City’s shock defeat to Newcastle United on Friday.

The reverse fixture, played back in January at Old Trafford, saw Manchester United eke out a narrow 2-1 win over Aston Villa, with Bruno Fernandes scoring the winning. Ahead of the latest meeting between the two sides, The Hard Tackle takes a closer look at the encounter.

Smith on Ross Barkley: “Confidence is a big thing; we have been building that up and I think we have seen that in the past two performances.”

That’s all for now, the full press conference will be available on VillaTV later today. ? #AVLMUN pic.twitter.com/RipYlvgtVD

Dean Smith does not have any fresh injury concerns hampering his preparations ahead of the visit of Manchester United. On Sunday, the Aston Villa manager will continue to be bereft of the services of as many as three first-team players.

The major absentee still is captain Jack Grealish, who is in the final stage of his recovery trail from a shin injury that has kept him sidelined the last 11 games. Indeed, Smith confirmed that Grealish will resume full training this weekend and could be available for the next game against Everton.

Meanwhile, Morgan Sanson is unavailable for at least one week, but should be back at Smith’s disposal before the end of the season, while Trezeguet might have played his final game of the term. The absence of the aforementioned trio means the Aston Villa manager is pretty much down to his bare bones in the attacking department.

Having said that, with Anwar El Ghazi stepping up lately, Smith would not mind being put in such a predicament. El Ghazi will be stationed on the left wing, with Bertrard Traore a certainty on the right flank. Ollie Watkins will lead the line for Villa against Manchester United, with Ross Barkley playing off of him.

In the midfield double pivot, John McGinn ought to pair up with Douglas Luiz, with the duo tasked with primarily keeping a lid on Bruno Fernandes and Paul Pogba’s output. McGinn, though, will also make late runs into the Manchester United box, which will give Villa an added dimension in attack.

Finally, in defence, the backline is an automatic pick. Ezri Konsa and Tyrone Mings will pair up at the heart of the Aston Villad defensive line, with Matty Cash and Matt Targett being the two full-backs. In goal, there is no looking past Emiliano Martinez, who has recently been linked with Manchester United. 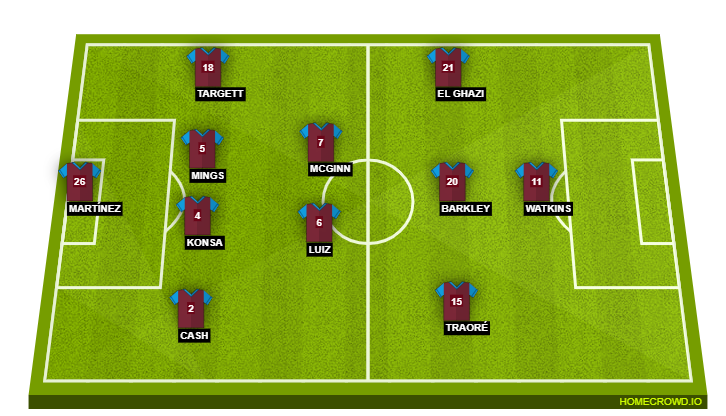 Like his counterpart in the Aston Villa dugout, Ole Gunnar Solskjaer does not have a lot of roster issues to contend with ahead of the trip to Villa Park. On Sunday, the Manchester United boss, like Dean Smith, will have to make do without just three first-team players.

Anthony Martial has resumed light running after recovering from a knee injury but is still some way off being back in contention for a place in the matchday squad, let alone the starting lineup. The likes of Phil Jones (knee) and Daniel James (knock), though, are still sidelined.

Amid a ridiculous fixture run, Solskjaer is likely to make a few changes here and there every game from now till the end of the Premier League campaign. The shuffle in goal, though, will not be a part of that outlook, with Dean Henderson the preferred choice in league games, despite the heroics of David de Gea earlier this week against AS Roma.

Solskjaer chose to take both his first-choice full-backs off at half-time on Thursday, meaning Luke Shaw and Aaron Wan-Bissaka have had a nice breather and should be in full flow against Villa. At the heart of the Manchester United defence, Victor Lindelof will once again partner captain Harry Maguire following Eric Bailly’s disastrous performance in Rome.

Up ahead in midfield, Scott McTominay ought to be a part of the double pivot alongside Fred, after being rested in the UEFA Europa League clash. McTominay’s return means Paul Pogba will once again return to his more natural habitat on the left wing, from where he will link up with and also engineer the chances alongside Manchester United talisman Bruno Fernandes.

Marcus Rashford was another player who was given a bit of a breather last time out and is, thus, a certain starter on Sunday. Finally, Edinson Cavani should spearhead the Manchester United attack against Aston Villa, meaning Mason Greenwood drops to the bench. 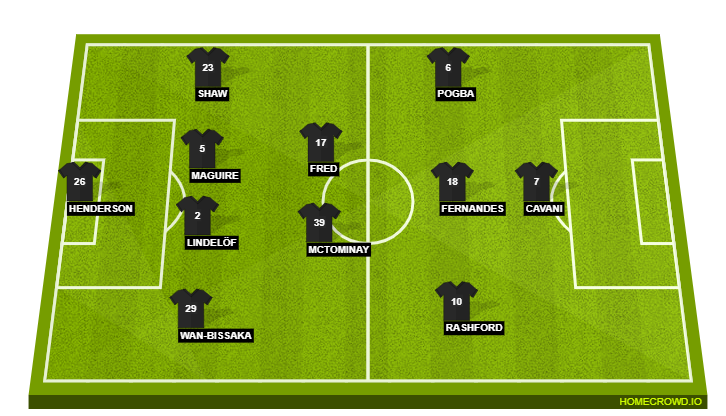 Edinson Cavani is in the best form since joining Manchester United while Bruno Fernandes and Paul Pogba always are shoo-ins for this section. However, for Sunday’s game, we are going with Marcus Rashford, as he is one player who needs to be at the top of his game in time before the UEFA Europa League final against Villarreal later this month.

With Aston Villa not being at their most solid on the defensive front lately, Rashford has the best opportunity to not only continue easing in on the right flank but also find a way to score bagful of goals from there. A big game beckons the English international, who will be eager to end the season on a high.

Manchester United almost never lose to Aston Villa in the Premier League. They have at least not done so away at Villa Park for the better part of the last two-and-a-half decades. And, with Jack Grealish still unavailable, the Villas might not pose a lot of danger for their visitors, although the in-form duo of Anwar El Ghazi and Ollie Watkins would like to have a say on that.

Having said that, with Edinson Cavani showing no signs of being slowed down by anything or anyone, Manchester United have a fearsome strike-force that will find a way to ease past a stuttering Aston Villa defence. With that in mind, The Hard Tackle predicts a 3-1 win for Ole Gunnar Solskjaer & co.