Real Madrid will hope to build on their big back-to-back wins this past week when they welcome Athletic Bilbao to Estadio Alfredo Di Stefano on Tuesday.

The games are starting to come thick and fast in La Liga as the festive period begins all across the continent. Reigning champions Real Madrid will face another big test of their credentials this week when they play hosts to Athletic Bilbao at the Alfredo Di Stefano Stadium on Tuesday night.

The 2020/21 season so far for Real Madrid has been characterized by rampant inconsistency, albeit wherein they have managed to raise their game in the most crucial fixtures. The clearest indication of the same was provided this past week, when they beat Borussia Monchengladbach to reach the UEFA Champions League Round of 16 before beating Atletico Madrid in La Liga.

The second result has thrown the title race wide open in La Liga, with Los Blancos now just three points off the top of the table. Athletic Bilbao, on the other hand, sit in the 12th spot heading into Matchday 14, having managed to win just 4 of their 12 games so far. Their form has slipped a little of late, with Gaizka Garitano & co. winning one of their last five fixtures and none of the last three.

The corresponding fixture last season saw Athletic Bilbao hold Real Madrid to a goalless stalemate, despite the best efforts of Zinedine Zidane’s charges. Ahead of the latest meeting between the two sides, The Hard Tackle takes a closer look at the encounter.

Zinedine Zidane has one fresh roster issue hampering his preparations ahead of the visit of Athletic Bilbao. On Tuesday, the Real Madrid manager will be bereft of the services of as many as five first-team players.

While the likes of Martin Odegaard, Eden Hazard, Luka Jovic and Mariano Diaz were already on the sidelines due to their respective injury issues, Real Madrid will now also miss Casemiro for their latest fixture due to an accumulation of yellow cards.

In Casemiro’s absence, Federico Valverde should be recalled, with the Uruguayan likely to be stationed as the deepest of the three midfielders. Toni Kroos and Luka Modric ought to be the other two players surrounding Valverde, with Isco being a backup option.

In defence and attack, Zidane has a multitude of options available to him, but is likely to keep the changes to a minimum. Karim Benzema is a certainty to lead the line for Real Madrid while the spine will be completed by Sergio Ramos, Raphael Varane and Thibaut Courtois, who will all have a role to play against Bilbao.

Out wide in attack, Lucas Vazquez and Vinicius Jr. should both keep hold of their places after a job well done against Atletico Madrid, although Marco Asensio and Rodrygo Goes are both pushing for recalls. In defence, there is no looking past Dani Carvajal and Ferland Mendy, with Marcelo and Alvaro Odriozola missing out again. 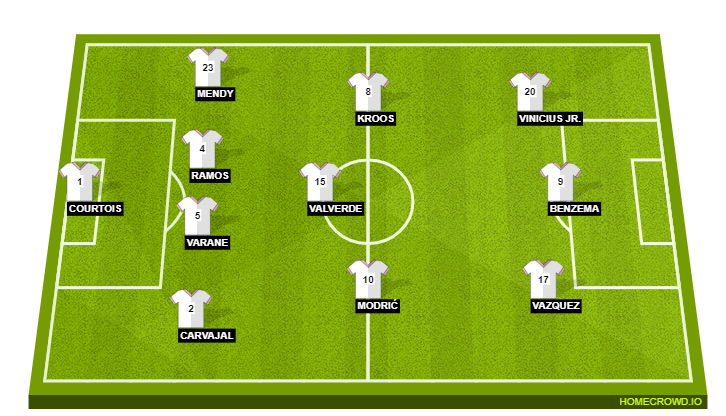 Unlike his counterpart in the Real Madrid dugout, Gaizka Garitano hardly has any pressing injury concerns to contend with ahead of the trip to the Spanish capital. On Tuesday, the Athletic Bilbao manager will have to make do without just one first-team player, with Peru Nolaskoain recovering from a knock.

Garitano is also sweating over the fitness of Mikel Vesga, who is struggling with a minor niggle, but should be fit enough to make the squad against Real Madrid. However, with games coming every few days now, the Bilbao boss is unlikely to take a chance with Vesga, meaning Unai Lopez could come into the midfield double pivot to partner Dani Garcia.

Unai Simon is an automatic pick in goal, with Athletic Bilbao set to line up in their trademark 4-2-3-1 formation in front of him against Real Madrid. The back four should see just one change, with Unai Nunez likely to come in for Yeray Alvarez to partner Inigo Martinez at the heart of the defence while Ander Capa and Yuri Berchiche will be the full-back pairing.

Finally, in attack, Raul Garcia will be hoping to be back in the starting lineup after opening his account in La Liga this season last time out. However, Asier Villalibre is still expected to lead the line for Bilbao against Real Madrid, with Inaki Williams and Alex Berenguer being the two wide men and Iker Muniain reprising the no. 10 role. 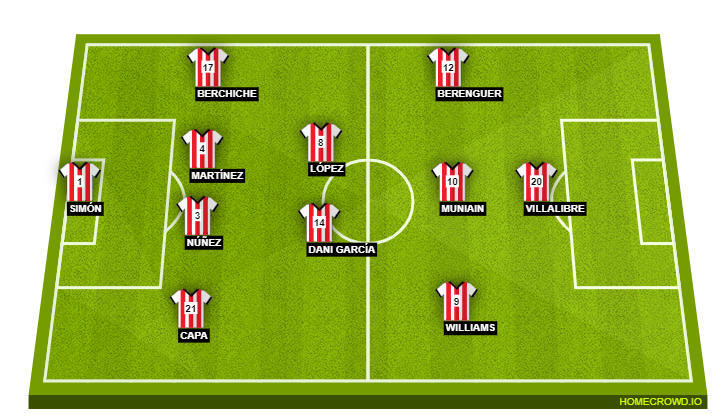 It is no secret that Real Madrid have not quite been at their best for stretched periods this season. However, it is important to note that their worst performances often tend to be produced when a certain Casemiro is missing as an anchor in the middle of the park.

Apart from Federico Valverde, Zinedine Zidane lacks a natural replacement for Casemiro within the squad and that is why, the Real Madrid boss might breathe easy ahead of the visit of Athletic Bilbao as Valverde is a part of the matchday squad. Tuesday’s fixture will, therefore, be a big test of the Uruguayan’s credentials and Zidane will hope he excels with flying colours.

This should be a rather straightforward affair for Real Madrid, despite the absence of Casemiro. The reigning La Liga champions often enjoy themselves when they are up against Athletic Bilbao, whose recent winless run is likely to be stretched further on Tuesday. Expect Federico Valverde to step up while Karim Benzema ought to be on the scoresheet again, with Real Madrid winning this 2-0.