Real Madrid will be desperate to bounce back to winning ways when they take on Sevilla at the Ramon Sanchez Pizjuan Stadium on Saturday.

La Liga action resumes this weekend with Matchday 12 of the 2020/21 season, with footballing activities coming at a breakneck speed all across Europe. Champions Real Madrid will continue the defence of their crown on Saturday when they lock horns with Sevilla at the Ramon Sanchez Pizjuan Stadium.

Heading into the latest matchday, Sevilla and Real Madrid are separated by just one point, with neither side managing to perform consistently thus far. Indeed, both teams have managed to win just five games till date, with the hosts playing a game fewer than Los Blancos.

Sevilla’s form in La Liga is quite promising, with their last defeat coming back in October, although they come into this match on the back of a 4-0 trouncing from Chelsea in the UEFA Champions League. Real Madrid, though, are in dire straits, having failed to win four of their last five games in all competitions, losing each of the last two.

The corresponding fixture last season saw Real Madrid eke out a narrow 1-0 win over Sevilla, with Karim Benzema scoring the only goal of the game. Ahead of the latest meeting between the two sides, The Hard Tackle takes a closer look at the encounter.

?️ Julen Lopetegui has given his pre-match press conference ahead of tomorrow's clash with @realmadriden. #WeareSevilla

Julen Lopetegui does not have any fresh roster issue hampering his preparations ahead of the visit of Real Madrid. On Saturday, the Sevilla manager will be bereft of the services of just three first-team players and is in fact, greeting the return of as many players.

Bono and Carlos Fernandez have rejoined first-team training in the build-up to the game and are in contention to feature in some capacity. In addition, Suso has also resumed training and will stake his claim to participate against Real Madrid.

Lopetegui, though, provided an update on Tomas Vaclik, iterating that the Czech goalkeeper will be out for some time. However, with Bono back, there are no concerns over the goalkeeping slot, with the 29-year-old expected to resume his duties between the sticks. Sergio Escudero and Marcos Acuna are the other two absentees for Sevilla.

In front of Bono, Sevilla should line up in a 4-3-3 formation, reverting from the 4-2-3-1 shape they assumed against Chelsea earlier this week. Karim Rekik will continue to deputise for Escudero on the left side of the Sevilla defence, with Jesus Navas continuing as the right-back. There is no looking past Diego Carlos and Joules Kounde in the central defensive partnership.

Up ahead in midfield, Ivan Rakitic should be joined by Fernando Reges and Joan Jordan, with the former Barcelona midfielder handling the creative duties. The attacking line should bear an entirely new look as well, with Luuk de Jong leading the line for Sevilla against Real Madrid while Lucas Ocampos and Munir El Haddadi ought to be the two wide men. 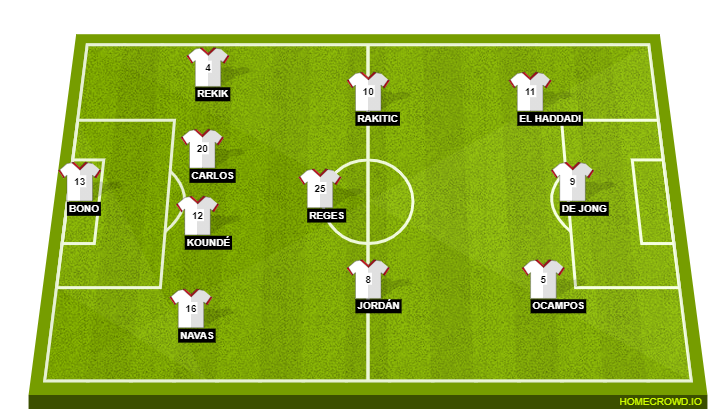 Much like his counterpart in the Sevilla dugout, Zinedine Zidane does not have any new squad woes to contend with ahead of the trip to the Ramon Sanchez Pizjuan Stadium. However, on Saturday, the Real Madrid manager will continue to have to make do without several key players.

While Luka Jovic is back in contention after recovering from the coronavirus, the likes of Eden Hazard, Dani Carvajal, Sergio Ramos and Federico Valverde are all expected to miss out for Real Madrid. In addition, Zidane is also sweating over the fitness of Thibaut Courtois, who only did individual work on Thursday.

Having said that, Courtois and Ramos seem to have participated in Friday’s outdoor session and could well make themselves available to take on Sevilla. If so, the duo should be reinstated into the starting lineup, with Nacho making way for the Real Madrid captain.

Ramos will pair up with Raphael Varane at the heart of the Real Madrid defence, with Ferland Mendy and Lucas Vazquez being the two full-backs. Up ahead in midfield, Casemiro ought to be recalled, with Luka Modric and Toni Kroos starting alongside him in the three-man unit.

Finally, in attack, there is no looking past Karim Benzema to lead the line for Real Madrid. Marco Asensio produced a much-improved display against Shakhtar Donetsk and should keep his place in the side. The final spot in the side should be taken up by Vinicius Jr., with Rodrygo Goes making way. 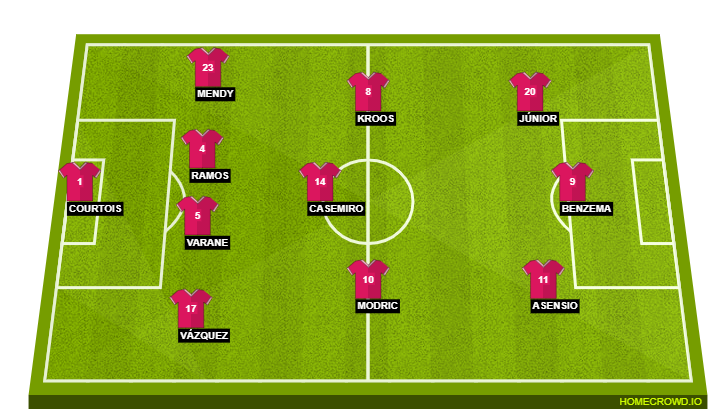 It has been a horrific start to the season but one player, in particular, has been absolutely dreadful so far. Raphael Varane, while still regarded as one of the best defenders in the world, has been quite vulnerable at the back, constantly looking like a player whose weaknesses can be exploited at any point in a match.

Things do not get any easier in a busy December, starting with a difficult trip to the Ramon Sanchez Pizjuan Stadium. The Frenchman is set to have Sergio Ramos by his side again soon enough, but he needs to pull his socks up, on an individual level, if Real Madrid are to rediscover their best levels. It all starts with the game against Sevilla on Saturday.

Real Madrid just do not seem like a team that exudes a lot of confidence right now. However, on the other side, Sevilla are coming off a horrendous performance at home against Chelsea. With both the teams having their backs against the wall, this has all the makings of being a game laden with a lot of uninhibited action.

A hurting Real Madrid side, though, should have the slightest of edges, despite Sevilla’s strong home record in La Liga. There will likely be goals in this game, but Karim Benzema should make a great deal of difference in the final third. The Hard Tackle, to that end, predicts a 2-1 win for Zinedine Zidane & co. in what will be a big result for them.