Liverpool will hope to book their place in the UEFA Champions League Round of 16 when they welcome Atalanta to Anfield on Wednesday.

Matchday 4 of the group stages of the 2020/21 UEFA Champions League will come to an end on Wednesday, with eight matches on show. One of the more eye-catching fixtures of the day will see Liverpool play hosts to Atalanta at Anfield, with the Reds just one win away from sealing a place in the knockout rounds.

2020/21 has been quite a turbulent season so far for Liverpool, with their squad being ravaged by a myriad of issues. However, that has not had an impact on their displays in the Champions League, with the Reds winning each of their three games so far in Europe without even conceding a single goal.

The Merseyside giants come into this match on the back of their best performance of the season so far in the Premier League, where they beat Leicester City 3-0 on Sunday. Atalanta, on the other hand, have not particularly been enjoying themselves in the early stages of the new campaign.

La Dea, who reached the quarter-finals of the Champions League last season, have managed to rake in just 4 points from their opening three games in Europe. With their last two Serie A games ending all square, the Italian outfit have now gone three games without a win, with their form starting to be quite worrying.

The reverse fixture, played at the Gewiss Stadium earlier this month, saw Liverpool cruise to a 5-0 win over Atalanta, with Diogo Jota netting a hat-trick while Mohamed Salah and Sadio Mane were on target as well. Ahead of the latest meeting between the two sides, The Hard Tackle takes a closer look at the encounter.

It seems to be a case of one step forward and one step back for Liverpool when it comes to their squad issues. Against Atalanta on Wednesday, Jurgen Klopp will have to make do without as many as eight first-team players, with the manager down to his bare bones following the latest troubles.

Naby Keita sustained a hamstring injury during Liverpool’s 3-0 win over Leicester City on the weekend and is likely to be unavailable for the game against Atalanta. Keita, along with captain Jordan Henderson, Thiago Alcantara, Alex Oxlade-Chamberlain and Xherdan Shaqiri, did not participate in training on Tuesday.

The quintet, therefore, joins Virgil van Dijk, Joe Gomez and Trent Alexander-Arnold on the sidelines and will play no part against Atalanta. Roberto Firmino was also missing from training on Tuesday but is believed to be available to take on Atalanta. The absence of Keita, though, warrants another change in formation after Klopp reverted to the 4-3-3 against Leicester.

Liverpool should be back lining up in a 4-2-3-1 formation against Atalanta, with Mohamed Salah, available again after recovering from COVID-19, leading the line and Firmino playing off of him. Diogo Jota and Sadio Mane will be the two wide men for the hosts, with Georginio Wijnaldum and Curtis Jones picking themselves in the midfield double pivot.

James Milner should once again get the nod over Neco Williams in the right-back slot, with Joel Matip and Fabinho pairing up at the heart of the Liverpool defence. Andrew Robertson is a certainty on the left flank, with Alisson Becker taking his place in goal. 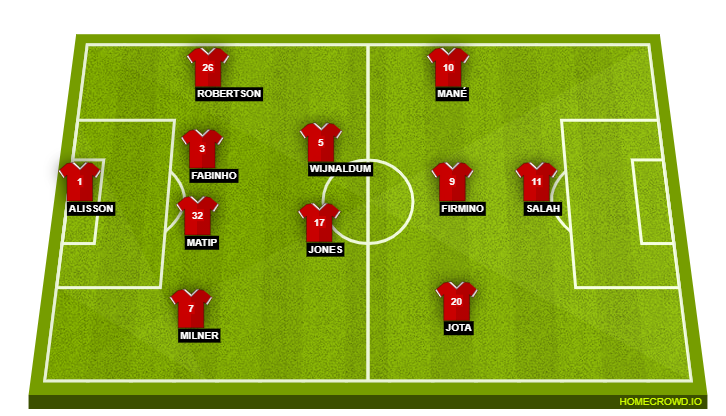 Like his counterpart in the Liverpool dugout, Gian Piero Gasperini will be missing a number of key players when his squad pay Anfield a visit. On Wednesday, the Atalanta manager will be bereft of the services of four first-team players.

Mattia Caldara, Fabio Depaoli, Mario Pasalic and Ruslan Malinovskiy all miss the trip to Liverpool, having been omitted from the travelling squad due to their respective issues. Otherwise, Gasperini has a full-strength squad at his disposal and should name a strong lineup on Wednesday.

Pierluigi Gollini ought to retain his place between the sticks, with Atalanta likely to line up in a familiar 3-4-1-2 formation against Liverpool. Rafael Toloi, Jose Luis Palomino and Berat Djimsiti will comprise the three-man central defensive unit.

Hans Hateboer is a certainty in the right wing-back slot while on the opposite flank, Johan Mojica should usurp Robin Gosens. Remo Freuler is likely to return to the midfield double pivot, where he will have Marten de Roon as his partner.

The orchestrator for the visitors will invariably be Papu Gomez and the Atalanta captain will hope to produce an improved showing against Liverpool. Finally, Luis Muriel should replace Josip Ilicic to be Duvan Zapata’s strike partner on Wednesday. 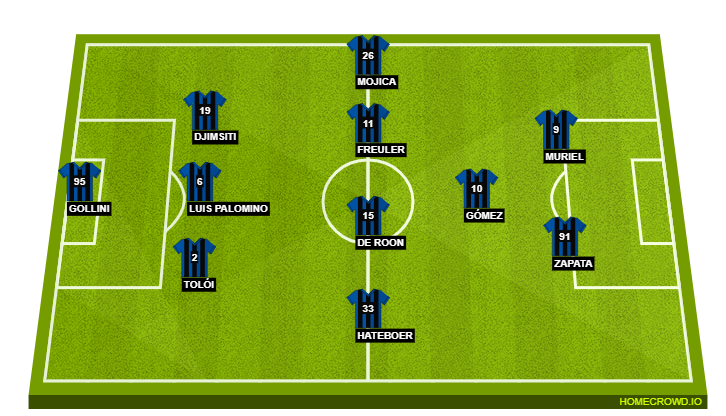 It is fair to say that Roberto Firmino has been well off his best for around a year now. The Brazilian, a vital cog in Jurgen Klopp’s squad, still plays a role that no one can but seemed to have regressed when it comes to his output in the final third. However, his showing against Leicester City has now given Liverpool fans some cause for optimism.

Klopp, who has always rated Firmino quite highly, has once again jumped to the praise of his star striker in the build-up to Wednesday’s game. What now remains to be seen is if Sunday’s showing versus Leicester was just an outlier, or if Firmino is indeed getting back to his best. The test against Atalanta will be a big indicator of the same.

Liverpool have quite simply been imperious in the UEFA Champions League, and their fine run is likely to continue on Wednesday. Atalanta do not seem to be performing at optimum levels and with a makeshift defence successfully shutting down Leicester City last time out, the Reds’ backline will be carrying a lot of confidence into the game.

Atalanta will still carry a great deal of threat and might just breach Alisson’s goal once. However, the returning Mohamed Salah will bolster the Liverpool attack, which should have a field day versus a vulnerable Atalanta defence. The Hard Tackle predicts another comfortable evening for the Reds, who should reach the UEFA Champions League Round of 16 with a 3-1 win.