Inter Milan will hope to record their first UEFA Champions League win of the season when they take on Shakhtar Donetsk at the Olimpiyskiy on Tuesday.

The UEFA Champions League resumes this week with Matchday 2 of the group stages this season. As was the case last week, there are two early matches on show, with one of them involving two teams from Group B as Shakhtar Donetsk play hosts to Inter Milan at the Nations Sports Complex Olimpiyskiy on Tuesday evening.

Shakhtar Donetsk have endured a difficult start to the 2020/21 season, with injuries and COVID-19 ravaging the squad just a month into the new campaign. However, that has not deterred the Ukrainian champions, who stunned Real Madrid in their Champions League opener last season to throw Group B wide open. In their league, however, Luis Castro & co. are third on the table.

Inter Milan, on the other hand, have been a little slow off the blocks this term, winning just three of their six games across all competitions. With each of those victories coming in Serie A, Antonio Conte’s men are currently fourth in the league standings. As far as the Champions League goes, the Nerazzurri played out a 2-2 draw with Borussia Monchengladbach in their opening fixture.

Shakhtar Donetsk and Inter Milan locked horns just a few months ago, in the UEFA Europa League semi-finals, with the Italian giants cruising to a 5-0 win. Ahead of the latest meeting between the two sides, The Hard Tackle takes a closer look at the encounter.

All eyes are on the @ChampionsLeague!

Things are not as dire on the team news front for Luis Castro as they were in the build-up to the game against Real Madrid last week. The Shakhtar Donetsk manager, though, continues to be bereft of the services of six first-team players ahead of the visit of Inter Milan.

Sergiy Kryvtsov, Ismaily, Maksym Malyshev, Viktor Kovalenko, Yevhen Konoplyanka and Junior Moraes are all currently on the sidelines due to injuries or other issues and will miss out against Inter Milan on Tuesday. Castro, though, has enough cover within his squad to cover for the absence of the aforementioned players.

In goal, Andriy Pyatov ought to return in place of the impressive Antoliy Trubin after recovering from his own fitness problem. In front of him, Shakhtar Donetsk will line up in a 4-2-3-1 formation, with the objective being to hit Inter Milan on the break, just as they did against Real Madrid.

Dodo and Viktor Korniienko ought to be the full-back pairing for the hosts, with David Khocholava and Mykola Matviyenko playing alongside each other at the heart of the Shakhtar Donetsk defence. Up ahead in midfield, Maycon and Alan Patrick will likely form the double pivot, with the duo sitting deep to contain the threat of the Inter Milan attack.

Marlos will reprise the no. 10 role, looking to connect the midfield with attack while making late runs into the Inter Milan box. The bulk of the threat will be posed by the two wide men, who ought to be Tete and Manor Salomon, while Dentinho will lead the line in the absence of Junior Moraes. 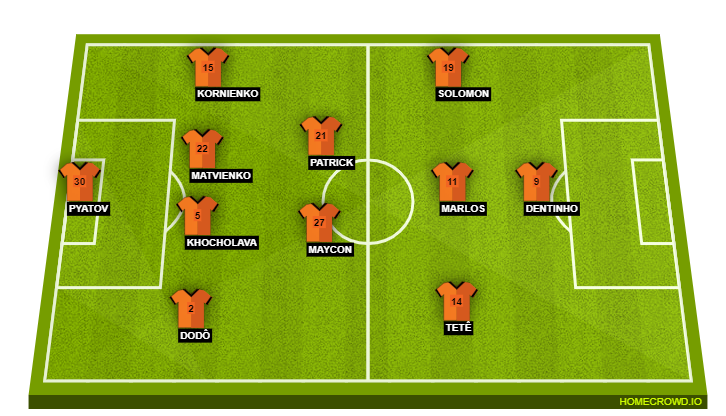 Much like his counterpart in the Shakhtar Donetsk dugout, Antonio Conte is missing a number of his players due to issues pertaining to injuries and the coronavirus. On Tuesday, the Inter Milan boss will be without six first-team players.

While the likes of Ionut Radu, Milan Skriniar and Roberto Gagliardini are all in isolation as they continue their respective recoveries from COVID-19, Stefano Sensi (thigh), Matias Vecino (knee) and Alexis Sanchez (thigh) are on the treatment table due to injuries.

Sensi’s absence means Christian Eriksen’s run in the side continues despite not really being in favour with Conte. Eriksen will play off Lautaro Martinez and Romelu Lukaku, who is the in-form player for Inter Milan heading into the game against Shakhtar Donetsk.

In midfield, Nicolo Barella will provide the creative impetus while Marcelo Brozovic will shore up the defensive side of things. Achraf Hakimi should return to the starting lineup as the right wing-back after making an appearance off the bench this past weekend, with Ivan Perisic continuing on the left flank.

As for the defence, Danilo D’Ambrosio is looking in fine touch and should continue in the three-man central defensive unit. The Italian international, though, should have Stefan de Vrij and Aleksandar Kolarov for company in the back-three, with captain Samir Handanovic taking his place between the sticks. 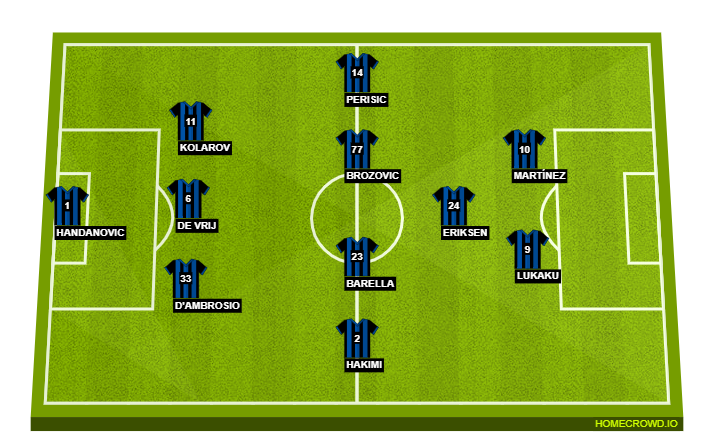 Inter Milan might have blown hot and cold so far in the 2020/21 season. However, Romelu Lukaku is enjoying the form of his life. Already up to seven goals in just six appearances this term, the Belgian powerhouse just cannot be stopped at the moment and Inter’s hopes constantly rest on his output in front of goal.

Indeed, Lukaku has been involved in each of the last six Champions League goals for Inter (4 goals, 2 assists), including a brace against Borussia Monchegladbach last week. And, Lukaku has also found the back of the net in each of his last nine European outings for Inter, scoring 11 goals.

With his star striker in such form, Antonio Conte can only hope that he produces the goods against a vulnerable Shakhtar Donetsk defence this Tuesday. If Lukaku does turn up, Inter Milan could coast through this encounter. Otherwise, they could be in for a long night’s work.

This is quite an interesting game. Shakhtar Donetsk are, against the odds, the early leaders in Group B of the UEFA Champions League. The two favourites, Inter Milan and Real Madrid, are still on the lookout for their first wins heading into Matchday 2. Buoyed by their exploits last week, the hosts should be in giant killing mood again.

Having said that, Real Madrid did expose Shakhtar Donetsk’s frailties at the back with their second half display last week, something Inter Milan will look to exploit on Tuesday. With Romelu Lukaku being quite clinical in front of goal, the hosts could be in for a difficult evening in Kyiv.

Expect Lukaku to continue his fabulous run of form, which should inspire Inter Milan to their maiden Champions League win of the season. The Hard Tackle, therefore, predicts a 3-1 success for Antonio Conte & co. against Shakhtar Donetsk on Tuesday.