Liverpool will kick off the defence of their Premier League crown when they welcome newly-promoted Leeds United to Anfield on Saturday.

The curtains are set to be raised on the 2020/21 Premier League season, less than two months after the end of the elongated 2019/20 top-flight campaign. Saturday’s proceedings will start and end in the capital, but the big fixture of the day will be at the home of the reigning champions as Liverpool play hosts to Leeds United at Anfield.

Liverpool finally ended decades of agonising wait by clinching the Premier League title for the first time last term. That was the Reds’ first top-flight triumph in thirty years and the objective will now be to build a model to sustain the success they have enjoyed in the past couple of seasons.

Jurgen Klopp’s men have already played one competitive fixture this season, losing to Arsenal in the FA Community Shield tie on penalties. Liverpool will now hope to ensure that the sub-par display at Wembley was but a blip, as they get set to kick-start the defence of their Premier League title against Leeds United.

Speaking of, Leeds returned to the Premier League after an excruciating 16-year exile after securing the Championship title last season. The Whites will now be eager to ensure they remain in the top tier of English football for a long time, with Marcelo Bielsa set for his first taste of Premier League football.

Liverpool were 3-1 victors the last time they hosted Leeds United in a Premier League contest at Anfield, with Michael Owen, Danny Murphy and Florent Sinama-Pongolle on target for the Reds. Ahead of the latest meeting between the two sides, The Hard Tackle takes a closer look at the encounter.

Jurgen Klopp does not have many pressing injury issues heading into the first day of the 2020/21 Premier League season. Against Leeds United on Saturday, the Liverpool manager will be bereft of the services of just one first-team player, with Alex Oxlade-Chamberlain nursing a knee injury. Klopp, though, is sweating over the fitness of three other players.

Those players are summer arrival Kostas Tsimikas and captain Jordan Henderson and Xherdan Shaqiri. Shaqiri and Henderson are on their way back from injuries while Tsimikas has recovered from COVID-19. The Liverpool boss has confirmed that the trio will undergo late fitness tests to determine their availability against Leeds.

Tsimikas was not expected to start anyway and will have to wait for some time to make his full Liverpool debut. As for Henderson, Klopp is likely to give him ample time to prove his fitness and the Liverpool skipper is unlikely to make it to the starting lineup. Meanwhile, Shaqiri is a backup option for the Reds.

The fitness situations of Henderson means the entire eleven that will take the field against Leeds pretty much picks itself. Alisson Becker will take his place in goal, with the hosts lining up in a 4-3-3 formation. Andrew Robertson and Trent Alexander-Arnold are automatic picks as the full-back pairing while Joe Gomez will partner Virgil van Dijk at the heart of the Liverpool defence.

Up ahead in midfield, James Milner has a chance to feature against his former club. If the ex-Leeds midfielder turns out for the Reds, he would have participated in each of the Whites’ last 31 Premier League fixtures. Milner, though, will likely be on the bench, with Fabinho, Georginio Wijnaldum and Naby Keita starting in the three-man midfield.

Finally, in attack, there is no looking past Mohamed Salah, Sadio Mane and Roberto Firmino in the three-pronged unit. Firmino will lead the line for Liverpool against Leeds, playing the false nine role, while Salah and Mane will be the two wide men looking to cut in and look for scoring opportunities. Like his counterpart in the Liverpool dugout, Marcelo Bielsa has just one player on the sidelines, with Adam Forshaw missing out. However, in contrast to Jurgen Klopp, the Leeds United boss is on the cusp of having a fully fit squad, with Forshaw nearing his return from a long-term injury.

The big talking point ahead of the season-opening Premier League fixture has centered around new signings Robin Koch and Rodrigo Moreno. Bielsa iterated during his pre-match presser that the duo are in good condition. But, having hardly trained with the first-team since joining the club, it is unlikely that either player will start against Liverpool on Saturday.

Rodrigo, however, should come off the bench to make his debut, although Patrick Bamford will start as long as the Spanish international is not up to speed. In Koch’s absence, Bielsa has a very tricky decision to make, as to who pairs up with captain Liam Cooper in the central defensive partnership.

The natural options at Bielsa’s disposal are promoted youth players, meaning it is likely that Luke Ayling, the first-choice right-back starts as a makeshift centre-back. Ayling’s temporary move to the heart of the Leeds defence means Stuart Dallas gets a rare chance to play in his natural right-back slot. The jigsaw will be completed by deploying Barry Douglas on the left flank.

The selection in midfield and attack is more straightforward. Kalvin Phillips, who is the beating heart of the Leeds United side, will sit at the base of the midfield, looking to pull the strings when the opportunity presents itself. Mateusz Klich and Pablo Hernandez will be the other two starting midfielders for the visitors.

Klich will provide defensive support to Phillips while Hernandez will provide the creative spark and take up advanced positions during the offensive phase of the game. Bamford will lead the line for Leeds against Liverpool, with Helder Costa and Jack Harrison being the wide duo, both of whom will carry a lot of threat in the final third but will need to put in a shift off the ball as well. 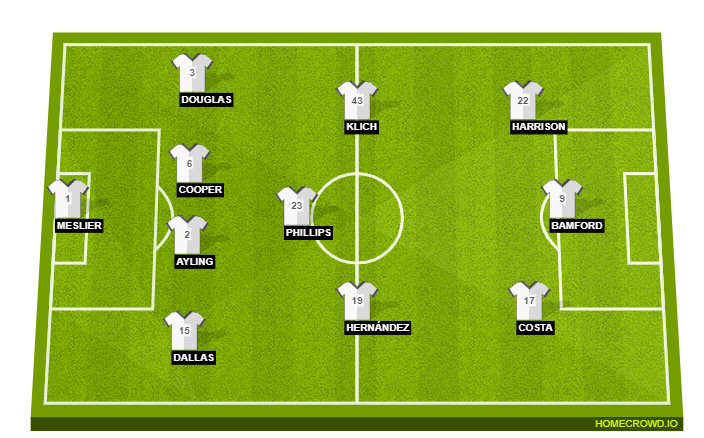 There have been many game changing signings made by Liverpool in the last few years; signings that have elevated the Reds to the status of being Premier League champions. However, the one player who has been ever present during this transformational period over the last couple of seasons, it is Mohamed Salah.

In his first couple of seasons with Liverpool, Salah won the Premier League Golden Boot before falling short last term. The Egyptian wing wizard will, therefore, be aching to get back to the top of the league’s scoring charts, starting with a solid showing against Leeds United. With 15 of his last 19 Premier League goals coming at Anfield, it is prudent not to bet against Salah scoring on Saturday.

For a second season running, Liverpool begin their Premier League campaign with a game against the previous season’s Championship winners. This time around, however, two things are different. Firstly, the Reds begin their maiden campaign as defending Premier League champions.

Secondly, the newly-promoted outfit – Leeds United – has what it takes to run the Merseyside giants close. Marcelo Bielsa is likely to spur his side on to play to his methods instead of adjusting his style of play.

Having said that, the Leeds attack could find it difficult to breach the Liverpool defence, despite the Reds’ wobbly form since winning the title earlier this year. Nevertheless, Jurgen Klopp & co. should be reasonably comfortable, which is why The Hard Tackle predicts a 2-0 win for the champions.