A mouthwatering contest will be on the cards when PSG take on Bayern Munich in Lisbon in the UEFA Champions League final on Sunday.

It has been a long and arduous season, but the curtains are finally set to drop on 2019/20 this week, with the UEFA Champions League final. First-time finalists PSG will lock horns with five-time champions Bayern Munich at Estadio da Luz in Lisbon on Sunday, in what promises to be a blockbuster affair.

PSG are on the cusp of an unprecedented quadruple, having won the domestic treble for the fourth time in the last six seasons. This time around, though, Les Parisiens could put years of frustrating underachievement on the continental stage behind them, if they can manage to win the Champions League title.

Thomas Tuchel’s men have shown some unforeseen fighting spirit in the competition this season, coming back from behind to beat Borussia Dortmund and Atalanta in the first two knockout rounds before swatting away RB Leipzig in the semi-finals. Bayern Munich, on the other hand, have been, by far, the most domineering team in the Champions League this season.

The Bavarian giants have won each of their 10 matches in Europe so far, and have bundled in an eye-watering 18 goals in just 4 knockout round fixtures. The Bundesliga champions are now aiming to complete a second treble in seven years, having already clinched the domestic double.

PSG and Bayern Munich last clashed in a competitive setting in the 2017/18 Champions League group stage, with bot teams winning a game each. Ahead of the latest meeting between the two sides, The Hard Tackle takes a closer look at the high-stakes encounter.

Thomas Tuchel does not have any fresh injury concerns hampering his preparations ahead of the UEFA Champions League final against Bayern Munich. On Sunday, the PSG manager will only be without two first-team players in the worst case scenario.

The good news, though, is that Idrissa Gueye and Marco Verratti are both fit and available after the duo trained normally in the lead-up to the game, Tuchel confirmed in his pre-match presser. Layvin Kurzawa, however, is a doubt due to a thigh injury, while the availability of Keylor Navas also is up in the air, due to his ongoing rehabilitation from the hamstring injury he picked against Atalanta.

Having said that, L’Equipe have claimed that the PSG no. 1 has trained normally and without any discomfort. Navas should, therefore, be able to return to the starting lineup, replacing Sergio Rico between the sticks.

As for the four-man defence, there is no looking past the quartet of Thilo Kehrer, Juan Bernat, Presnel Kimpembe and captain Thiago Silva, who will be playing his final game for PSG against Bayern Munich on Sunday. Kehrer might be the weak link Bayern will look to exploit in the PSG backline, with the in-form Serge Gnabry up against him.

In midfield, the key decision will be deciding whether Verratti makes the starting lineup. The Italian international is not fully fit and Tuchel might decide to bolster his options as the game progresses, especially with Gueye available. Gueye should, thus, replace Leandro Paredes, with Marquinhos and Ander Herrera starting alongside him in the middle of the park.

Finally, in attack, Tuchel is likely to stick with the system that worked oh so well last time out. And so, Neymar should start as the false nine once again, with Angel Di Maria and Kylian Mbappe being the two wide men. Mbappe would often be the furthest man forward for PSG, with Neymar and Di Maria providing the creative impetus while also looking for scoring opportunities. 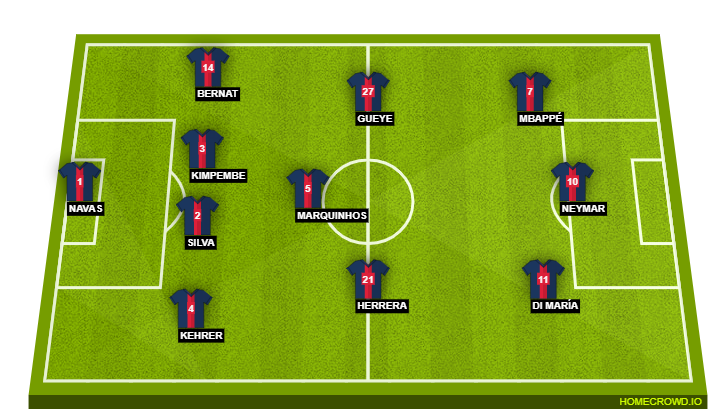 Like his counterpart in the PSG dugout, Hansi Flick does not have any new roster issues to contend with ahead of his side’s final fixture of the season. In the Champions League final on Sunday, the Bayern Munich boss will likely have a full-strength squad at his disposal.

Benjamin Pavard is fully fit after recovering from an ankle injury and Lothar Matthaus has opined that the French international could be back in the starting lineup straightaway against PSG. Jerome Boateng, though, has been classed as a doubt since sustaining a knock in the semi-final against Lyon.

However, the German international is expected to shrug off the minor complaint in order to pip the likes of Niklas Sule, Lucas Hernandes and Javi Martinez to start against PSG. Boateng will have David Alaba for company at the heart of the Bayern Munich defence, with Pavard and Alphonso Davies being the full-back pairing. Captain Manuel Neuer will once again start in goal.

Pavard’s inclusion is a major decision that Flick needs to make because Joshua Kimmich then returns in midfield. The German international’s presence in the middle of the park will be crucial in determining how well Bayern Munich are able to restrict the flow of the PSG moves.

Kimmich should indeed be back in the midfield double pivot, with Leon Goretzka expected to be his partner, meaning Thiago Alcantara drops down to the bench. Thomas Muller will be the advanced midfielder, reprising the no. 10 role and looking to pull the strings higher up the pitch.

Apart from Muller, Serge Gnabry and Robert Lewandowski will be the pivotal figures in attack, with Ivan Perisic starting on the right flank. Gnabry, who has been so good that he could perhaps be picked over Kylian Mbappe in a PSG-Bayern Munich Combined XI, will pose a major threat, while Lewandowski will have Cristiano Ronaldo’s goalscoring record for a single season in sight. 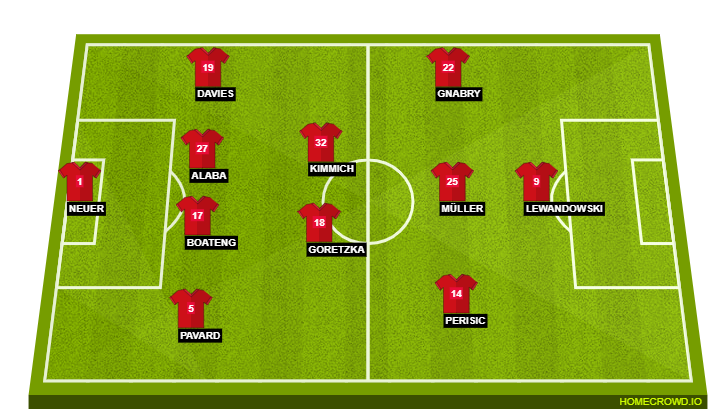 It will be a star-studded affair when PSG take on Bayern Munich on Sunday and in such a setting, it is hard to pick out one player who could stand out. However, the 2019/20 UEFA Champions League has been Robert Lewandowski’s season and the Polish striker will once again have the spotlight on him.

In fact, it could even be argued that with 55 goals and 10 assists in 46 games in all competitions, Lewandowski has been the best player in Europe bar none. One personal milestone still eludes him. However, the incredible Cristiano Ronaldo’s record of scoring 17 goals in a single Champions League campaign is within reach, with Lewandowski scoring 15 times this term so far.

A hat-trick is what he will be out to score against PSG and such a return is highly likely to also give Bayern Munich their sixth Champions League triumph. Such a result would also enable Lewandowski to end his European hoodoo and he will be eager to do everything in his powers to get the German champions over the line on Sunday.

The last game of the 2019/20 season might also be one that is the toughest to predict. Both PSG and Bayern Munich have top class attacking units, with three of the best players in the world in tow. At the back, though, neither side inspires much confidence and the game could well be about which defensive unit can manage to hold its nerve better.

Another key factor would be the position Joshua Kimmich is deployed in. Bayern Munich might have the edge if he is back in midfield, from where he can do the containing job much better. PSG, on the other hand, will likely have Marco Verratti coming off the bench, which could prove to be key as well. Experience at the big stage is also an important factor worth considering.

With PSG making it to the Champions League final for the very first time, they could come undone. Having said that, most of their players also do not have the experience of facing defeat at such a stage either. However, they will be eager to set the record straight after failing to deliver in Europe for years now.

Bayern Munich will have their own reasons and motivation to give it everything they have got and more, with a certain Robert Lewandowski desperate to end his Champions League duck. In the end, the margins will be slim and we are going with a 3-2 win for Bayern Munich, at the end of extra time, with Lewandowski delivering the goods for the Bavarians.