Inter Milan will be looking to reclaim second spot on the Serie A table when they take on SPAL at Stadio Paolo Mazza on Thursday.

The action is going to be relentless in the coming weeks in Italy as Serie A teams look to bring the curtains down on the season before European football resumes. Inter Milan return to action on Thursday, just three days after their last game, as they lock horns with SPAL at Stadio Paolo Mazza.

For SPAL, 2019/20 has been a season of misery. Gli Spallini I Biancazzurri have managed to win just five games in the Serie A all season while suffering a whopping 23 defeats, meaning they are rock bottom with 19 points. Luigi Di Biagio’s men are 11 points away from safety and apart from an unlikely charge late on, they are destined for the drop.

Inter Milan, on the other hand, have slowly been rebuilding into a decent unit under the tutelage of Antonio Conte. After a bit of a lull, the Nerazzurri look like they could finish second, with a late title tilt also possible owing to Juventus’s recent form. Last time out, Inter beat Torino 3-1 at San Siro, with Ashley Young, Lautaro Martinez and Diego Godin on target.

The reverse fixture, played in Milan back in December, ended in a 2-1 win for Inter, with Martinez scoring a match-winning brace, while Mattia Valoti scored the consolation goal for SPAL. Ahead of the latest meeting between the two sides, The Hard Tackle takes a closer look at the encounter.

Luigi Di Biagio does not have any fresh injury concerns to deal with ahead of the visit of Inter Milan. On Thursday, the SPAL manager will be without four first-team players, with Etrit Berisha (hand), Ervin Zukanovic (ankle), Mattia Valoti (muscle injury) and Mohamed Fares (thigh) missing out for the hosts.

Di Biagio ought to line his side up in his usual 4-4-2 formation, with Karlo Letica taking his place in the SPAL goal. Thiago Cionek and Arkadiusz Reca will likely be the full-back pairing for the hosts once again, with Francesco Vicari and Kevin Bonifazi pairing up at the heart of the defence against Inter.

The major changes ought to come in midfield, with Mirko Valdifiori coming in for Simone Missiroli. The 24-year-old will be tasked with keeping things tight in the middle of the park, with Bryan Dabo providing him defensive support.

Marco D’Alessandro is likely to be deployed on the right side of the SPAL midfield, with Federico Di Francesco starting on the left flank. Upfront, Andrea Petagna is certain to lead the line against Inter Milan. However, the SPAL top scorer could have a new strike partner, with captain Sergio Floccari making way for Alberto Cerri. 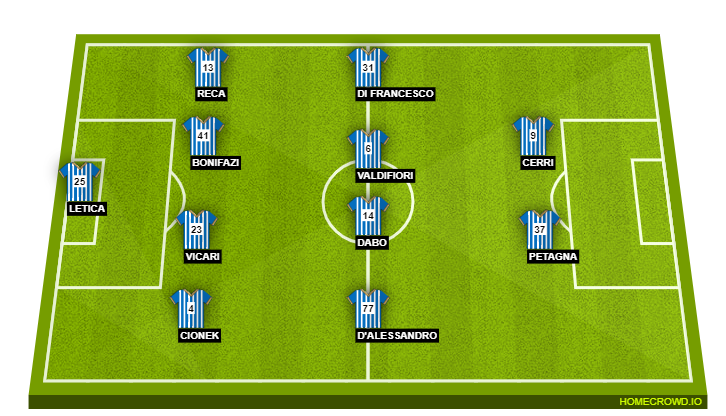 Like his counterpart in the SPAL dugout, Antonio Conte is not being bogged down by any fresh fitness issues. However, with Diego Godin suspended due to an accumulation of yellow cards, the Inter Milan boss will be bereft of the services of five first-team players in all.

Apart from Godin, Inter Milan will also be travelling to Ferrara without Matias Vecino, Nicolo Barella, Stefano Sensi and Victor Moses. Conte, though, has plenty of resources at his disposal to cover for the absence of the injured quartet.

In place of the suspended Godin, Milan Skriniar is the natural replacement. The Slovak will provide company to Stefan de Vrij and Alessandro Bastoni in the back-three, which will cover captain Samir Handanovic.

Meanwhile, Antonio Candreva is expected to return to the side, starting in the right wing-back slot. On the opposite flank, Ashley Young should continue, having been one of the better players for Inter Milan since the restart. Young and Candreva will flank Marcelo Brozovic and Roberto Gagliardini.

Upfront, Romelu Lukaku’s iffy fitness situation means Alexis Sanchez should start in the strike partnership alongside Lautaro Martinez, whose future remains uncertain. Sanchez and Martinez will be supported by Christian Eriksen in the No. 10 slot. 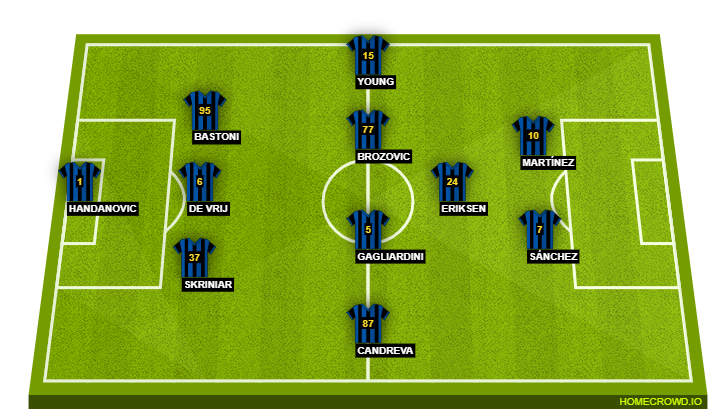 After a couple of difficult seasons, Alexis Sanchez had hoped to return to his pomp at Inter Milan. Things have not completely gone to plan, but as the season nears its end, things are starting to fall into place for the Chilean winger.

Against Torino, Sanchez was in his elements, creating a whopping 10 chances while also proving 2 assists; for context, no player has created more chances in a single game in a top-five European league game this season. All signs point towards a resurgence and another strong performance against SPAL would only prove the same. it is now or never for Sanchez.

Inter Milan made a strong statement against Torino, and their latest game might prove to be a more straightforward affair. SPAL are in all sorts of trouble and are unlikely to provide any sort of meaningful threat over the course of the game, even though they are in home comforts.

With Alexis Sanchez starting to come into his own, Inter Milan could end up having a sight at goal a number of times on Thursday. Lautaro Martinez, too, could be in business in the game and it looks like a comfortable evening beckons the Nerazzurri. With that in mind, The Hard Tackle predicts a 2-0 win for Antonio Conte & co.