South American champions Brazil are set to face Colombia in a high profile friendly in Miami in what promises to be an entertaining clash of the giants.

While all of Europe is battling to make it to next summer’s European Championships, a high profile friendly meeting between two South American powerhouses is set to take centre stage. Brazil and Colombia will renew their rivalry when they lock horns at the Hard Rock Stadium in Miami.

While there is nothing at stake, the fact that either side can have bragging rights over the other ahead of next year’s World Cup Qualifiers sets up this clash well.

Fresh from winning the Copa America in the summer, Brazil will be fired up to keep their team’s gaining momentum going, but Colombia are a fierce opposition. The Selecao though, are on a 16-game unbeaten streak, something they would want to continue for the foreseeable future.

Their only loss came at the World Cup last year to Belgium, who sit just ahead of them in first on the FIFA rankings. Meanwhile, Brazil are on a formidable defensive run as well, conceding just once in their last eight games, with Peru scoring from the penalty spot against them during the summer tournament.

With the continental victory, Brazil sure did exorcise the demons of the last World Cup. However, it is imperative they maintain their form and high standards at least until the next World tournament in Qatar.

The Colombia game is an excellent opportunity for Tite to experiment with some of his more younger stars. These games could also be an opportunity to slowly phase out some of the stars who would be well past their peak by the time the next world tournament arrives.

Their opponents, Colombia, are on a reasonable run of form themselves. They have been beaten only once in their last 11 games under 90 minutes. They did lose to Chile in the Copa America on penalties, so that will not be counted as part of the above stat. However, their only normal time defeat came against South Korea in a friendly.

Manager Carlos Queiroz will take charge of his 200th international match when his Colombian side meets Brazil, and he will be hoping it be a memorable one. The Hard Tackle now takes a closer look at the two sides.

Tite has a formidable squad under his command and has a vibrant group to choose from. The most notable absentee from the Copa America squad is Alisson, who is out injured since the opening day of the Premier League season. In his stead, Ederson will get a rare opportunity to impress and stake his claim for the goalkeeping spot.

Dani Alves should keep his place on the right side of the defence. The new Flamengo signing is only one of two outfield players over the age of 30 to be included in the squad, with Thiago Silva being the other one. Alves, who was a standout performer in the Copa America is a likely starter, as Tite certainly cannot ignore him for the triumph he helped deliver.

The backline should be completed by Marquinhos and Samir, who will be making his debut for Brazil. The big news is the inclusion of Neymar in the squad, as the PSG superstar missed the Copa America through injury.

The return of Neymar has meant that Everton Soares has dropped out of the squad, with the disgruntled PSG star set to take his place in the side. Gabriel Jesus has missed out due to injury and David Neres should start in his stead, with Roberto Firmino leading the line for Brazil against Colombia.

Carlos Queiroz has a few problems to deal with, as few of his top stars are injured for this clash. Star forwards James Rodriguez and Radamel Falcao are absent after suffering injuries in recent weeks. This is a problem for Colombia considering they have been inefficient in attack in the last five hours of football played.

Queiroz has, however, handed call-ups to some fresh faces for this round of international fixtures. The likes of Duvan Zapata, Luis Muriel and Roger Martinez are all included, while Rafael Santos Borre and Eder Chaux will be hoping to make their debuts against Brazil.

Despite the injury troubles, Queiroz still has a good squad of players to choose from. The Colombia boss will go with a 4-4-2 setup to contain Brazil’s more potent attackers. All eyes will be on Zapata and his ability to lead the Colombian frontline after the Atalanta striker impressively finished last season. 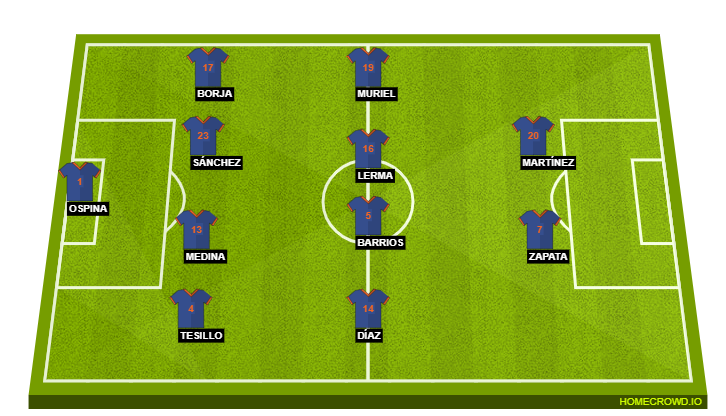 There can be little doubt as to who the top-billed player for this clash is. Neymar is undoubtedly the crowd puller, the man in focus and a player who has to prove a lot after a summer of uncertainty. After seeing his move to Barcelona fall out acrimoniously, the star forward will be keen to show the world that he is still a great footballer.

The Colombia game is an excellent opportunity to showcase his talents, especially for his national side after missing out on Copa America glory. Brazil managed to win the continental tournament rather comfortably in Neymar’s absence. Now, the PSG star has to integrate himself well and show what the team could be with him in it.

There can be no doubt as to who the winner might be in this blockbuster clash of the South American giants. Brazil, who are already in some formidable form, are boosted by the return of Neymar. That and Colombia’s injury problems, especially to their star forwards will create a gulf in the quality both teams possess.

When the lineups are compared, it becomes clear Brazil have the formula to win with the players they are set to start with. Colombia can take this game as an experience and experiment heading into the new phase with Carlos Queiroz, while Brazil will merely be looking to continue their devastating recent form.