Japan and Paraguay are set to meet each other in an international friendly, with both sides featuring for the first time since the Copa America.

Japan were one of the guest nations invited to participate in the 2019 Copa America in Brazil. The Blue Samurai did not manage to get past the group stages of the tournament, although they did put up a good fight to earn two draws against Uruguay and Ecuador. This turnaround happened after a first game defeat to Chile.

Japan will now hope to build momentum when they take on Paraguay. Manager Hajime Moriyasu will want his team to understand and gel together before they play an all-important World Cup Qualifier after this game. The Asian giants will be anticipating a good test from Paraguay, who have been in good form lately.

Paraguay, unlike Japan, had an excellent Copa America. Los Guaranies La Albirroja managed to get out of their group and into the Round of 16, where they endured defeat at the hands of eventual champions Brazil. However, they did not let the Selecao win that easily as they took the game to penalties, wherein Gustavo Gomez and Derlis Gonzalez missed their spot-kicks.

Manager, Eduardo Berizzo will be hoping the Japan game could come across as a chance to build team spirit as he looks to settle in on a squad ahead of next year’s 2022 World Cup Qualifiers. The Hard Tackle now runs the rule over both the teams ahead of their international friendly.

Hajime Moriyasu has decided to exclude plenty of the players that featured at the Copa America. Among those who missed on a call-up were Shinji Okazaki, Hiroki Abe and Daiki Sugioka, with the Japan head coach looking to balance his team with youth and experience.

One player who is guaranteed for a start is Werder Bremen forward Yuya Osako. The Werder Bremen striker has 14 goals in 43 appearances for Japan, and Moriyasu will look at his experience upfront. Another player who is expected to play is Porto midfielder Shoya Nakajima, who should start out on the left.

Moriyasu is likely to field his side in a 4-4-2 formation against Paraguay. Eiji Kawashima will start in goal, with Hiroki Sakai, Naomichi Ueda, Takehiro Tomiyasu and Yuto Nagatomo in support ahead of him in defence.

Takumi Minamino, Gaku Shibasaki, Genki Haraguchi and Nakajima are all expected to fill the midfield berths, while Kensuke Nagai and Osako are scheduled to start up front.

Eduardo Berizzo too has left out a number of his key players for the trip to Asia. Midfielders Hernan Perez, Celso Ortiz and Matias Rojas have all been left out, while defender Santiago Arzamendia and striker Oscar Cardozo are also absent, although Miguel Almiron has travelled.

The Newcastle United star is the crucial player for Paraguay, and Berizzo will be looking to build his team around him for the foreseeable future. Joining Almiron in the side could be West Ham United defender Fabian Balbuena, who Berizzo is looking to integrate into the team properly, having featured only 12 times for the national side so far.

Gatito Fernandez will take his place in goal for Paraguay, while Balbuena will likely have Gustavo Gomez as his central defensive partner. Ivan Piris and Junior Alonso will be the two full-backs, who will support Oscar Romero and Alejandro Romero Gamarra, respectively.

Juan Rodrigo Rojas and Richard Sanchez will hold the fort in the middle of the park, while Almiron will play off the central striker and will look to pull the strings for Paraguay. The aforementioned striker ought to be Derlis Gonzalez. 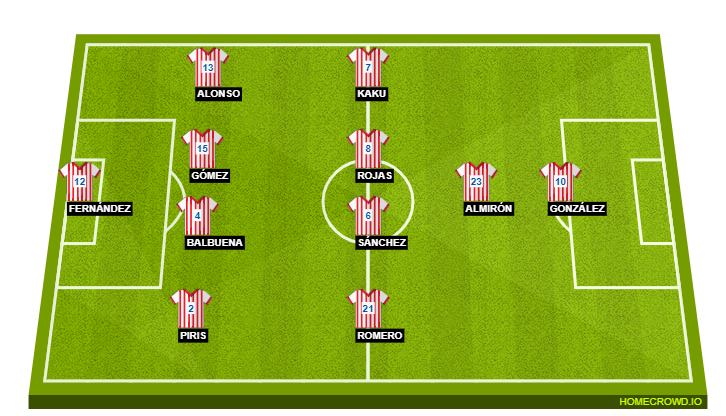 The Newcastle United midfielder signed with the Premier League side last January amid much fanfare. Almiron has since been impressive for the club and Paraguay boss Eduardo Berizzo will be hoping his reputation follows him when playing for the national side.

Paraguay are largely counting on Almiron’s ability to execute lightning-fast counter attacks as well as his hard-working nature. Almiron must kick-start in full swing in what looks like a promising future for Paraguay with him on their side.

Both sides have enough quality to cancel each other out. The contest will be tight and as things stand, it could be anyone’s game. While Miguel Almiron is set to be a key player for Paraguay, it will be interesting to see if the Newcastle United man can dictate play and help his side overcome Japan. However, the home crowd will be behind the Blue Samurai to help them get a result.

Not that Japan is a bad side, but with many recognised players missing, it is hard to envisage a win for the home team. Additionally, the team is being phased into the next generation, meaning players are still adapting. However, the side has enough quality to see off a team like Paraguay on most days, but The Hard Tackle is going with a draw, in what is expected to be a low scoring tie.