Manchester City will look to seal their place in the Round of 16 when they take on Napoli in a UEFA Champions League Group F match as San Paolo.

Matchday 4 of the Group Stage in the UEFA Champions League comes to an end on Wednesday. In Group F, Manchester City will be aiming to secure a place in the Round of 16 when they travel to San Paolo to face Napoli.

The match pits two of the most in-form sides in Europe, with both Napoli and Manchester City unbeaten in domestic competitions, and leading their respective league tables. In the Champions League, though, the hosts have endured a disappointing campaign thus far, having taken just three points from their first three games.

Manchester City, on the other hand, have been imperious in Europe so far, with three wins out of three. The Citizens will be able to clinch a place in the first knockout round if they avoid defeat on Wednesday, while Maurizio Sarri’s men need all three points to remain in contention of topping the group.

The reverse fixture, a fortnight ago, was a closely contested affair as Pep Guardiola’s men fought hard to beat Napoli 2-1 at the Etihad. Ahead of their latest meeting on Wednesday, The Hard Tackle takes a closer look at the encounter.

Maurizio Sarri has a near-full strength squad at his disposal ahead of the visit of Manchester City on Wednesday, with only one long-term absentee in Arkadiusz Milik. The Polish striker is set to be sidelined for up to four months with a knee injury.

The Napoli boss, therefore, is set to deploy his strongest possible starting eleven on Wednesday. His preparations have been further boosted by the availability of the fit-again Christian Maggio, who is likely to start on the right side of defence in place of Elseid Hysaj.

Meanwhile, Kalidou Koulibaly, Amadou Diawara and Piotr Zielinski were all rested for Napoli’s win over Sassuolo on Saturday, and are expected to return to the starting lineup on Wednesday. Koulibaly should line up alongside Raul Albiol at the heart of defence.

Diawara and Zielinski are likely to slot in the midfield trio along with captain Marek Hamsik. Up front, the trio of Jose Callejon, Dries Mertens and Lorenzo Insigne will have the task to get the all-important goals to get a crucial win for the hosts. 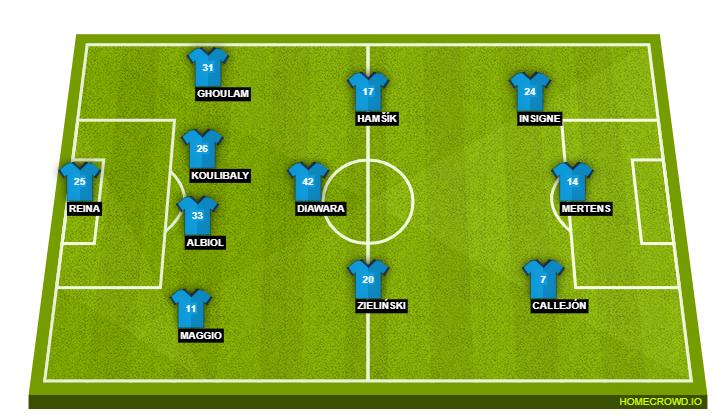 Pep Guardiola does not have any fresh injury concerns either ahead of the trip to Naples on Wednesday. Vincent Kompany (calf) and Benjamin Mendy (knee) remain the only two absentees due to their respective injuries.

So, like Sarri, the Manchester City boss has been able to train with a near full-strength squad to prepare for the tricky fixture against Napoli. Guardiola, though, is unlikely to make a lot of changes to the side that narrowly beat West Bromwich Albion over the weekend, despite a taxing away game.

However, Sergio Aguero is expected to return to the starting lineup after being given a day off against West Brom. Raheem Sterling is also pushing for a start after coming off the bench to score the winner on Saturday, and is vying with Leroy Sane and Gabriel Jesus for the two remaining spots in attack.

The midfield trio pick themselves up, with Fernandinho, Kevin De Bruyne and David Silva fit and firing. At the back, with Kompany injured, John Stones and Nicolas Otamendi should continue at the heart of the Manchester City defence, with Kyle Walker and Fabian Delph expected to be the full-backs. His side may be one of the most in-form sides in Europe currently, often leaving him with very little to do. But on Wednesday, Pepe Reina will be up against one of the most free-scoring teams in Europe, when Manchester City visit San Paolo.

With Kevin De Bruyne and David Silva in imperious form, feeding the attacking powerhouses of the likes of Sergio Aguero, Leroy Sane, Gabriel Jesus and Raheem Sterling, the Spaniard will have a tough time keeping the ball out of his net.

A solid outing on Wednesday though, could potentially help his side pick up three crucial points that would keep their Champions League hopes alive.

There is very little stopping Manchester City right now, who are flying high at the moment. Up against Napoli at what is likely to be a hostile San Paolo though, Pep Guardiola’s men will be up against it, and the match would be a great strength of their mentality.

Napoli, though, have posed a vulnerable look at the back in the Champions League thus far, and the free-scoring Manchester City side should pose a danger on the break. Therefore, The Hard Tackle predicts Wednesday’s encounter to be keenly contested – we’re going for a high scoring draw.