Predicted Real Madrid lineup against Cadiz: Kroos in for Modric; Benzema misses out

Toni Kroos will replace Luka Modric, but Karim Benzema will miss out again when Real Madrid and Cadiz face off at the Santiago Bernabeu on Thursday.

Real Madrid will look to bounce back to winning ways and go into the World Cup break on a high when they welcome Cadiz to the Santiago Bernabeu on Thursday night. And Carlo Ancelotti does not have any new squad issues hampering his preparations ahead of his side’s latest fixture.

Karim Benzema remains unavailable due to his persistent muscle injuries. In addition, Antonio Rudiger is yet to recover from a minor issue. Otherwise, Ancelotti has a full-strength squad at his disposal, with Toni Kroos returning after serving a suspension.

Ancelotti spoke about Benzema in his pre-match press conference, expressing his disappointment about the Frenchman’s absence. The Real Madrid boss said, “I’m disappointed that Karim hasn’t been able to support the team with his quality in the last few games. The niggle has come back, which is only a small thing. He tried to make himself available, but wasn’t able to.”

“Benzema is the first one who’s disappointed with this situation. He’s about to play in a World Cup when he hasn’t been given the minutes to go into it in good shape. I don’t believe that they’ve dropped him, that’s nonsense.”

“He had a minor problem, but it was nothing serious. He’s trained on his own, but didn’t feel ready to play. He’s going to play in a World Cup as the Ballon d’Or winner without getting minutes in his legs.”

Benzema’s continued absence means Rodrygo Goes should play as the central striker again this week. Vinicius Junior will join his compatriot in the final third, with Marco Asensio retaining his spot after two impressive performances.

Kroos picks himself in the midfield trifecta, with Luka Modric likely to drop to the bench. The Croat appeared jaded against Rayo Vallecano on Monday and will get some much-needed rest. So Kroos should line up alongside Federico Valverde and Aurelien Tchouameni in the middle of the park. 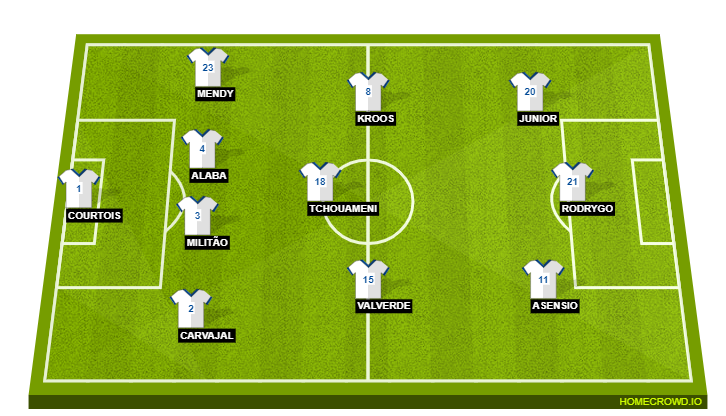 As for the defensive unit, Ancelotti will unlikely make any changes in Rudiger’s absence. Eder Militao and David Alaba will thus pair up at the heart of the Real Madrid defence, with Ferland Mendy and Dani Carvajal being the two full-backs. Finally, Thibaut Courtois picks himself between the sticks against Cadiz.