Andrew Robertson should return, but Luis Diaz and Joel Matip miss out ahead of the UEFA Champions League clash between Liverpool and Rangers.

Liverpool come into the game against Rangers on the back of a 3-2 defeat to Arsenal at the weekend. And they will be desperate to bounce back with a positive result at the Ibrox.

As far as the team news is concerned, Jurgen Klopp has a number of injury issues to deal with. He was already without Naby Keita and Alex Oxlade-Chamberlain because they are not in Liverpool’s Champions League squad.

In addition, Joel Matip, Trent Alexander Arnold and Luis Diaz are sidelined with injuries. All three players picked up their knocks against Arsenal at the weekend and will miss out here. Diaz is expected to return after the World Cup, while Alexander-Arnold and Matip are expected to be out for two to three weeks.

But in some good news, Andy Robertson has returned to training. And according to Klopp, the Scottish left-back will be in line to start here. Speaking to the media during his pre-match press conference, Klopp said, “Robbo is in the squad for tomorrow; Curtis not, Ox not, Naby not. That’s it.”

“I thought we were maybe hopefully a little bit lucky with Trent because the ankle didn’t look good, to be honest. Lucho, what is it, six to eight [weeks] or whatever? We will see how long.”

“Lucho looks like a quick healer but anyway we have obviously to be careful with that. [It] could have been worse as well, the way he moved after the game. And actually, Joel just felt a little bit, but that’s what you do nowadays to make a scan, and then he was out as well.”

Joe Gomez will likely deputise as the right-back in Alexander-Arnold’s absence. Ibrahima Konate should pair up with Virgil van Dijk at the heart of the Liverpool defence. Meanwhile, on Alexander-Arnold, Klopp added, “It is always difficult to say. Shorter than a month; two weeks I heard but we have to see if that’s right.”

As far as the midfield unit is concerned, Thiago Alcantara will likely partner Fabinho at the heart of Liverpool’s midfield. Mohamed Salah and Diogo Jota should start as the wide attackers in a 4-4-2 system. 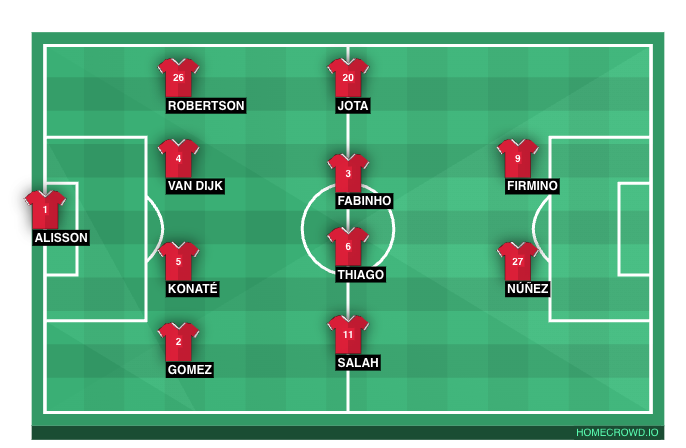 Darwin Nunez and Roberto Firmino have been impressive in the last couple of games, and they will likely start in a front two. Meanwhile, Brazilian goalkeeper Alisson Becker is set to start in goal after having impressed on a consistent basis this season.