Cristiano Ronaldo will start, while Christian Eriksen will feature in midfield when Manchester United and Brentford face off on Saturday.

Manchester United will be desperate to kick-start their 2022/23 campaign when they lock horns with Brentford at the Brentford Community Stadium on Saturday evening. And Erik ten Hag does not have a new roster issue hampering his preparations ahead of his team’s latest fixture.

Anthony Martial remains on the sidelines due to the hamstring injury that forced him to miss the season-opening game for Manchester United. In addition to the French international, Victor Lindelof (knock), Brandon Williams (unspecified), and Facundo Pellistri (ankle) are also unavailable to take on Brentford.

Erik ten Hag has confirmed that there are no changes on the team news front, but he had a positive update on Cristiano Ronaldo, who did not start the season-opening defeat to Brighton & Hove Albion last weekend due to a lack of match fitness.

Speaking about Ronaldo’s situation during his pre-match press conference, ten Hag said, “He had a good training week, I thought he played a little bit longer than half an hour [against Brighton], I would say he now has two half a games. The starting XI, we will see tomorrow. I, of course, have made my decision but I [will] keep it.”

Ronaldo should return to the starting lineup despite rampant uncertainties surrounding his long-term future at Manchester United. The Portuguese international will spearhead the Manchester United attack against Brentford, with Jadon Sancho and Marcus Rashford picking themselves in the wide-attacking slots.

As for the midfield unit, Christian Eriksen could feature as a box-to-box midfielder after reprising the “false-nine” role against Brighton. Scott McTominay and Fred were horrendous last weekend, and McTominay will pay the price for his performance, with Fred starting at the base of the three-person unit.

With Fred being the holding midfielder, Eriksen will have more defensive responsibilities, with Bruno Fernandes being the creative supremo for Manchester United. Meanwhile, the defensive unit should not see major surgery, with Lisandro Martinez and Harry Maguire pairing up at the heart of the Manchester United defence. 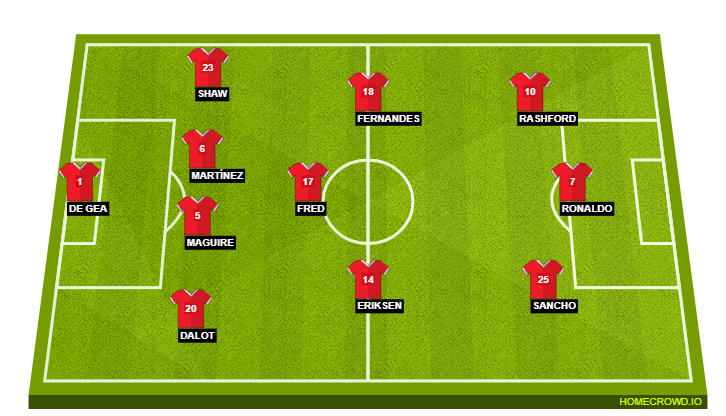 Diogo Dalot and Luke Shaw will be the two full-backs for the Red Devils against Brentford, with Aaron Wan-Bissaka and Tyrell Malacia missing out again. Finally, David de Gea will take his spot between the sticks against Brentford on Saturday evening.