Predicted Real Madrid lineup against Villarreal: Casemiro in for Camavinga; Benzema ruled out

Casemiro will likely replace Eduardo Camavinga, but Karim Benzema is ruled out for Real Madrid’s game against Villarreal on Saturday.

Real Madrid will hope to consolidate their place atop the La Liga table when they lock horns with Villarreal at Estadio de la Ceramica on Saturday afternoon. Carlo Ancelotti does not have any new injury concern to deal with ahead of his side’s latest fixture.

Ferland Mendy (muscle injury) and Karim Benzema (hamstring) remain sidelined due to their respective fitness issues. The French duo is battling to regain fitness in time for the crucial UEFA Champions League Round of 16 first leg against Paris Saint-Germain next week.

During his pre-match press conference, Ancelotti provided an update on Benzema and Mendy. The Real Madrid boss said, “We’re feeling good about Karim. He’s still working individually and we have to wait for him to be back working with the team, which will be on Sunday or Monday, before we make the decision. There’s nothing I can say until then.”

“The general feeling from me and the doctors is very good. We’ve always said that the player’s health comes first. We don’t take risks. Karim will play if we think he can do so without taking risks. If Karim plays on Tuesday it’ll be because there’s no risk. Mendy has been doing well, but won’t make tomorrow’s game. I think he’ll be ok for Tuesday. He started training a bit with the team yesterday and is feeling good.”

With Benzema ruled out, Ancelotti will have a tricky decision to make in the attacking unit. Luka Jovic is an option to spearhead the Real Madrid attack, but Isco will likely get the nod in the false nine role again, just as he had done against Granada. The Spaniard will be flanked by Vinicius Jr. and Marco Asensio again in the final third.

Ancelotti also spoke about the need to manage Vinicius’s fitness amid a hectic season, saying, “Vini Jr. needed a good rest. I’ve given him an extra day to rest because January was a really intense month for him. He’s doing well. He’s motivated and I think he can reproduce the same form we’ve seen from him recently.”

While the PSG contest is close by, Ancelotti is unlikely to make too many alterations to the side that started against Granada. But Casemiro is in line to replace Eduardo Camavinga at the base of the midfield, with Luka Modric and Toni Kroos being his partners in the middle of the park. 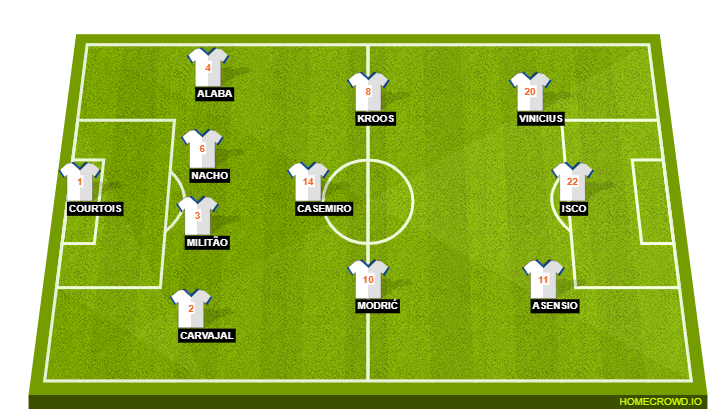 The only other change in the starting lineup should come in the left-back slot, with David Alaba likely to be deployed in the role in Marcelo’s stead. Alaba’s spot at the heart of the Real Madrid defence will be taken up by Nacho, with Eder Militao the other centre-back. Dani Carvajal is an automatic pick in the right-back position. Finally, Thibaut Courtois picks himself between the sticks against Villarreal.