Thiago Silva and Reece James are set to return but Christian Pulisic remains unavailable ahead of Chelsea’s game on Wednesday against Malmo.

Chelsea will be looking to get their UEFA Champions League campaign back on track when they play hosts to Malmo at Stamford Bridge in a Group H tie on Wednesday night. And ahead of his side’s latest fixture, Thomas Tuchel has been handed a major boost on the team news front.

The Chelsea boss has Thiago Silva, Antonio Rudiger and Hakim Ziyech back at his disposal after the trio missed out this past weekend against Brentford due to various reasons. Silva has served his rest period after returning late from international duty with Brazil while Rudiger is fit again after recovering from a back injury.

Ziyech, meanwhile, has put an illness behind him to make himself available. That means that only Christian Pulisic remains on the sidelines for Chelsea, and in his pre-match press conference, Tuchel provided an update on the American forward.

“It’s only Christian Pulisic who is missing for tomorrow. He was getting close [to a return] but then had a little reaction with some pain in his ankle. Christian is impatient because he wants to play, he wants to be on the pitch helping us and we can see how much he is suffering in team meetings when he can’t be involved. This is normal. It’s difficult for him.”

“He got injured during a match for the USA, he suffered a tough foul and hurt his ankle. There is nothing to worry about him in terms of hiding details or anything like that. I cannot give you all the information because, simply, I’m not a doctor but he has had some small setbacks from the pain in the ankle. These are not setbacks from a major injury or any further complications, it is just from pain in the ankle that disturbs him.”

Pulisic’s absence does not pose a major concern for Tuchel, considering Ziyech is available again. The Moroccan playmaker, though, is only likely to be on the bench against Malmo, and as will Timo Werner. So that essentially means that Mason Mount and Kai Havertz will play off of Romelu Lukaku, who will lead the line for Chelsea.

In the middle of the park, Jorginho ought to return, with N’Golo Kante making way, as Tuchel continues to manage his minutes. The Italian international should have Mateo Kovacic as his central midfield partner, with Ruben Loftus-Cheek set to be named among the substitutes. 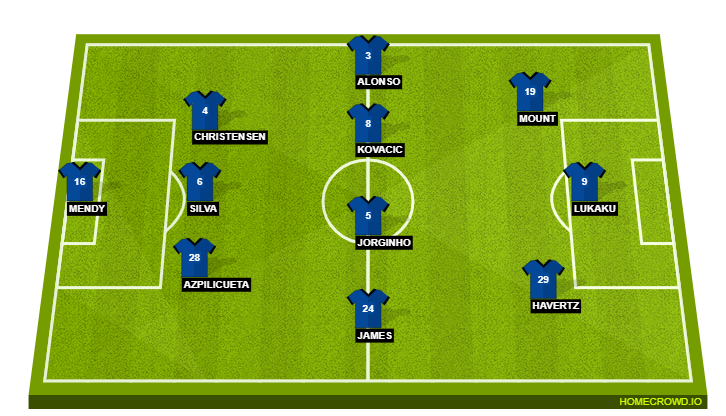 As for the defensive unit, Chelsea should field a new wing-back pairing, with Reece James fit enough to start. On the left flank, Marcos Alonso could get a chance to impress after recently losing his spot to Ben Chilwell. As for the back three, Silva is expected to be back, lining up alongside Cesar Azpilicueta and Andreas Christensen, with Edouard Mendy in goal.