James Milner will replace Diogo Jota while Nathaniel Phillips misses out again when Liverpool take on Manchester United on Sunday.

Liverpool will be striving to keep pace with Chelsea in the top four race when they lock horns with Manchester United at Old Trafford on Sunday evening. And, Jurgen Klopp is not bogged down by any fresh injury concerns ahead of his side’s latest game.

The bad news, though, is that Nathaniel Phillips is still not fit enough to be back at the Liverpool manager’s disposal. In addition to Phillips, the likes of Caoimhin Kelleher, Virgil van Dijk, Joel Matip, Joe Gomez, Jordan Henderson and Divock Origi also remain unavailable.

During his pre-match press conference, Klopp provided an update on the team news front, saying, “No, no. All the same in this moment. It means nobody told me, ‘Fasten your seatbelt, make yourself ready, the boys will be in team training next week.’ No, nothing changed really, but they [long-term absentees van Dijk, Gomez, Matip and Henderson] are in a good way.”

The Liverpool boss elaborated further on the long-term absentees during his presser, informing, “I don’t have enough English words to describe the same thing more often. Yes, he is running – Hendo is running, Joe is running, Joel is running. That’s all good; imagine they wouldn’t be able to run in the moment, that would be really bad.”

With Phillips still unavailable, Fabinho will feature at the heart of the Liverpool defence again, with Ozan Kabak starting alongside him at the back. Out wide, there is no looking past Trent Alexander-Arnold and Andrew Robertson in the full-back positions, while Alisson Becker is a certainty in goal.

Up ahead in midfield, a likely change in formation to the 4-3-3 would mean that James Milner could be recalled. The veteran Englishman will start alongside Thiago Alcantara and Georginio Wijnaldum, with Alex Oxlade-Chamberlain and Naby Keita being backup options. Thiago will play the holding midfield role at the base, while Milner and Wijnaldum will essay the box-to-box roles. 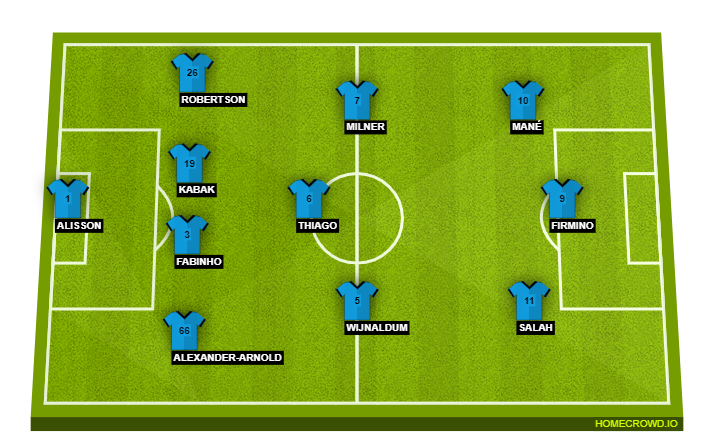 Diogo Jota, who was underwhelming last time out against Newcastle United, will make way for Milner, meaning Mohamed Salah, Roberto Firmino and Sadio Mane will feature in the Liverpool attacking unit against Manchester United. Salah and Mane will be the two wide men, with Firmino reprising his usual false nine role.