Casemiro and Viniciur Jr. are set to return, but Rodrygo Goes will drop down to the bench when Real Madrid take on Sevilla on Saturday.

Real Madrid will be desperate to bounce back to winning ways and claim all three points when they lock horns with Sevilla at the Ramon Sanchez Pizjuan Stadium on Saturday evening. And, Zinedine Zidane does not have any fresh injury concerns to contend with ahead of his side’s latest fixture.

The likes of Sergio Ramos, Dani Carvajal, Federico Valverde and Eden Hazard remain unavailable for Real Madrid, even though Ramos did take part in training on Friday. However, Thibaut Courtois has shrugged off a knock to make himself available. Also back in the travelling squad, is Alvaro Odriozola, who will be in contention to take on Sevilla.

Odriozola, though, might not make the starting lineup, if the Eder Militao treatment is anything to go by. As a result, it is likely that Lucas Vazquez will continue on the right side of the Real Madrid defence, with Ferland Mendy starting on the left again. Meanwhile, during his pre-match press conference, Zidane was quizzed about the availability of Ramos.

“We’re not going to take any chances with Sergio Ramos. If he can play, he’ll be there. I don’t want to play a player who has a problem and then he makes it worse. We’ll see what we come up with tomorrow. We want all the players back.”

With Ramos continuing to be unavailable, Raphael Varane will have Nacho as his partner at the heart of the Real Madrid defence again. Up ahead in midfield, a change in formation to the 4-3-3 should see Casemiro being reunited with long-term partners Toni Kroos and Luka Modric.

Casemiro will sit at the base of the three-man midfield, with Kroos and Modric being the creative duo for Real Madrid. Martin Odegaard, therefore, drops down to the bench, where he will be a backup option like Isco. 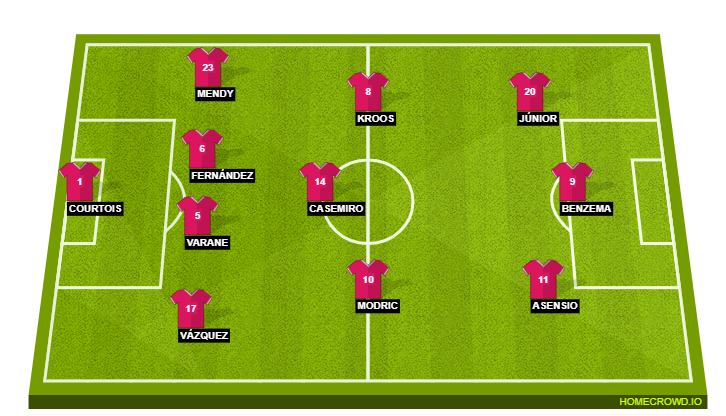 Finally, in attack, Karim Benzema is a certainty to lead the line for Real Madrid against Sevilla, especially with Luka Jovic and Mariano Diaz excluded from the travelling squad. Marco Asensio was much-improved earlier this week and should keep his place in the side. However, Vinicius Jr. is expected to replace compatriot Rodrygo Goes in the final spot in the team.