With 59 games done and dusted, we are left with the Grand Finale of yet another riveting Indian Super League campaign as Kerala Blasters play host to the Atletico De Kolkata in their own backyard

As always, the Jawaharlal Nehru Stadium at Kochi has been a searing furnace packed to the limit by a legion of loyal supporters of the Kerala Blasters. Their energy from the crowd infectiously passes on to the players enabling them to dispatch any class of opponents in their backyard.

They will have the chance to do that once more on Sunday as their side entertains Atletico De Kolkata in the final of the Indian Super League.

The Blasters will bear in mind the events from the final of the inaugural edition of the ISL when a goal in the dying minutes of stoppage time from Mohammad Rafique handed the title to Kolkata at the end of an enthralling final, that looked almost certain to go towards extra-time.

Interestingly though, Rafique now graces the ranks of the Blasters and it’ll be worth noticing if the 24-year-old works his charm against his former team.

Steve Coppell has done a marvelous job with a Kerala side that were coming at the back of a poor performance last time around. He lifted their spirits, tweaked their style of play and made them a force to be reckoned with even if just on their home turf.

Having left it till the end to secure their progress through to the knockout stages, the Blasters were pushed through to the edge by the Delhi Dynamos all the way up to the penalty shootouts before they could progress into their second final in three years.

Atletico De Kolkata are the most consistent team in the competition’s brief history making it to the knockout stage on all three editions and making their 18th December date against the Blasters their second final.

While they had a rampant Chennaiyin outfit stop them in their tracks in the semi-final, their test this time around was no pushover either. Yet Jose Molina’s side managed to clinically sweep aside arguably the best team this year in Mumbai City FC.

Riding on Iain Hume’s first-leg hat-trick Kolkata produced a solid defensive performance in the second leg to ensure Mumbai did not impede them in their pursuit of the ISL title.

Throw the fans into the picture and you have an ultimate team effort that has guided Kerala all the way through to the semi-finals of this year’s competition. However, even then there have been a few players that have stood out for the Blasters, most notably striker and local boy CK Vineeth.

The Bengaluru FC forward was out of action for the first quarter of a campaign owing to his participation in the AFC Cup with the I-League outfit, but has come on and has effected a major impact on Kerala’s ISL campaign.

That said, it has been far from a fairy tale ride through to the final as the Blasters were made to work for each and every point in this campaign and Sunday’s clash will be no different.

Coppell has primarily deployed his side in a 4-2-3-1 formation this season while occasionally switching to the 4-4-1-1 like he did in the semi-finals. The backbone of the team has remained constant throughout this campaign with Sandeep Jhingan, Aaron Hughes, Cedric Hengbart and Jose Currais holding the side’s defensive line together.

Apart from their defensive resilience it has been the quality of their forwards that has enabled to get an edge over their opponents.

Aiding CK Vineeth in attack, the likes of Kervens Belfort, Antonio German, Mohammad Rafi and Duckens Nazon have been greatly effective in penetrating the opposition defence and irrespective of starts on Sunday, Coppell will feel confident his batch of attackers can deliver on the big occasion like they have all season.

In midfield, we can expect the boss to persist with the partnership of Mehtab Hossain and Chadian international Azrack Mahamat, with the duo ably helping their side to exert dominance in midfield winning tackles in crucial areas and kick-starting counter-attacks for their forwards to take advantage of.

With 5 clean sheets to show for this season, 41-year-old veteran Sandip Nandy is expected to take the reigns in goal over his English counterpart Graham Stack, who’s managed only one. There are no injury issues and absentees to worry about for Coppell and he will have a full-strength roster to pick his starting XI on Sunday. 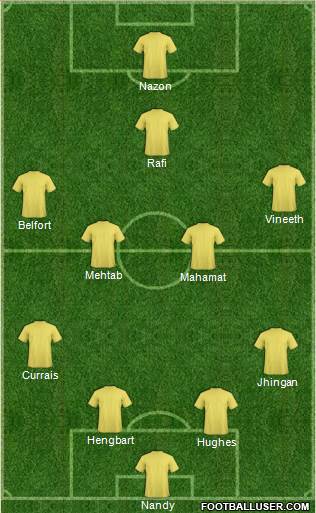 Kolkata will look to factor in their experience to break down the resolve of a Kerala side plotting revenge after they were left shattered by Atletico’s late win in 2014. However, things are a lot different in this Kolkata side from the title winning one two years ago.

While Antonio Lopes Habas’ side will be remembered for their dogged defending, that hasn’t exactly been the case with them this time around having shipped a few goals over the course of the competition.

Atletico have mostly adopted a 4-2-3-1 and 4-4-1-1 formation throughout the season and are most likely to adopt the latter on Saturday knowing that they will need bodies behind to defend against the Blasters’ pacy and creative forward line.

Kolkata’s strength lies in the midfield partnership of Stephen Pearson and Borja Fernandez in the centre of the park and they will have their task cut-out in trying to overpower the likes of Mehtab and Mahamat.

A major absentee from the Kolkata set-up will be defender Arnab Mondal who is ruled out of the final having undergone a surgery. Apart from him the likes of Robert Lalthlamuana and Beloncosso are anyways out due to the red cards the two players received following the post-match brawl in the 2nd semifinal.

Keegan Perreira could slot in at left-back while Hume could take his place up-top after sitting out of the semi-final.

Prior to the semi-finals, the dearth of goals from their forwards was a cause for concern for Molina, but all of that changed last week in a stellar display from Iain Hume, as he registered a marvelous hat-trick just when it mattered to help his side upstage an in-form Mumbai side in the semi-final.

The boss will pin his hopes on the Canadian international to deliver the goods once more and add to his 7-goal tally this season. It’s hard to count out the most prolific striker in the history of the competition, but it’ll be some story if the striker could win it for Atletico against his former team.

They may have shipped a lot of goals but that by no means makes Kolkata an easy team to beat. Molina’s side have lost only two games all season, a record matched by no other team in the league. 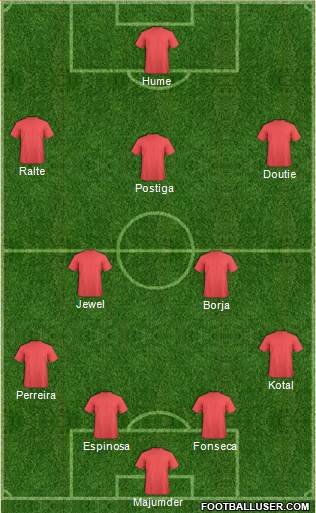 There are a number of battles one can pluck out between the two sides but the most attractive prospect is that between the two forwards. CK Vineeth is the top-scoring Indian in the league this campaign with 5 strikes to his name.

A Kerala boy, born and bred, it’ll be worth watching the 28-year-old with fire in his belly fighting hard like he has all tournament to undo his side’s 2014 disappointment.

Hume was on the losing side of this fixture two years ago and he’ll dearly hope he can end up on the winning side this time around and have an ISL title to show for his prolific goal-scoring exploits in the competition.

The English-born Canadian international will be keen to add to his 23-goal ISL tally to aid his side’s pursuit of what will be a second crown in two years for the Sourav Ganguly-owned franchise.

There has been little to separate between the two sides from their previous meetings and while Kolkata hold the head-to-head advantage this season, they’d be ready to part with it in favour of a victory in the final.

But given how the final is staged in their home turf and keeping in mind their record there, it’s hard to bet against Kerala lifting the crown in front of their adoring supporters on Sunday.