A 56th minute Diego Forlan penalty settled the tie for Mumbai City as they notched their second win on the bounce, this time overcoming a spirited Northeast United side. Both teams posted a resilient defence and it was only a marginal penalty call that sent the game in favour of the Maharashtrian side. A challenge at the edge of the Northeast United FC penalty box from Reagan Singh on Pronay Halder earned the Mumbaikars the penalty which Forlan duly converted despite Subrata Paul getting a hand to it.

Northeast United were on a decent run of form themselves having already won their two games prior to the clash at the Mumbai Football Arena. However the Ranbir Kapoor-owned franchise halted Northeast in their tracks and prevented them from securing a rare hat-trick of wins. The victory was not enough for Mumbai to knock Northeast off their perch in top spot as the latter remained there by virtue of a superior goal-difference.

Mumbai head coach Alexandre Guimaraes decided to stick to the same line-up that logged the full three points against Pune City in the Maharashtrian Derby last week. Meanwhile Northeast were playing their 3rd game in under a week and it left coach Nelo Vingada with some necessary reshuffling to do as he brought on marquee signing Didier Zokoro along with Seityasen Singh and Argentinean striker Nicolas Velez.

Much like the opening game, Forlan was often left stranded up-front desperately craving for good service and eventually the Uruguayan began to drop deep into midfield to get involved in the build-up play. Northeast had the upper-hand in the first half as midfielder Romaric had the early sights on goal and was only denied by Roberto Neto in goal for Mumbai. The defence in the opening few minutes left Neto understandably dismayed as he called for more resilience from the back-four to keep the Northeast attack at bay. The second half saw a Mumbai side that had found it’s feet in the game as they began to threaten Subrata Paul’s goal. Forlan and Aibor Khongjee had a couple of daring long-range attempts at goal only to be thwarted by Zokoro and Subrata respectively. The best chance on the night though fell to Northeast United’s Japanese striker Katsumi Yusa who was sent through on goal by Velez only for him to shoot the ball way off target from just 12 yards out.

The penalty incident then triggered a torrent of attacks from Northeast as they strived hard to secure an equalizer that would pit them four points clear at the top. Mumbai’s solid defence aided by Neto in goal ensured that the Maharashtrians secured yet another narrow victory to keep them in the qualification spots for the knock-out phase of the competition. It’s still early days in the campaign, but Northeast and Mumbai will both be satisfied with the starts they have enjoyed this season and they will look to keep it going as both the sides will have their sights set on a maiden league title.

Having lost their opening games, FC Goa and Pune City FC are the only sides left to open their accounts for the new Indian Super League season and will be driven to earn a result from today’s clash at the Fatorda. Goa have been among the more consistent campaigners in the ISL and a lot of that comes from the marvelous support they receive at the Nehru Stadium, Margao, week in and week out. The home crowd will look to get behind their team as Zico & co look to piece their campaign together to possibly wage a challenge for the title having faltered at the grand finale last time around.

Goa will look to get their season up and running in their first home game of the season at the Fatorda and will need an inspired performance from their players following their loss to Northeast United FC in their opening game. The Goans looked particularly impressive last time around because of their wing-play and the pace on the flanks enabled them to exploit the width of the pitch. And in Mandar Rao Desai, Zico has an integral member of the squad he will look up to rack up the crosses to Coelho and Reinaldo in attack. The 24-year-old also brings with him the added goal threat having scored 3 goals last season in Goa’s route to the ISL final. Zico is likely to stick to the 3-4-1-2 formation with marquee signing Lucio lining up along side Rafael Dumas and Keenan Almeida. The Goans are still missing out on the services of key players like Robin Singh, Gregory Arnolin, Luciano Sobrosa, Denzil Franco and Subhashish Roy Chowdhury who are all nursing injuries and are unlikely to feature against Pune City. Goalkeeper Laxmikant Kattimani had a poor outing in the first game however Zico refused to single out the goalkeeper for their opening day blues and is prepared to keep faith with him in between the sticks on Saturday.

Zico will be aware of the vulnerability of his back-line evidenced by their loss early in the week and will look to ensure his side address those problems ahead of bottom-of-the-table clash at the Fatorda. 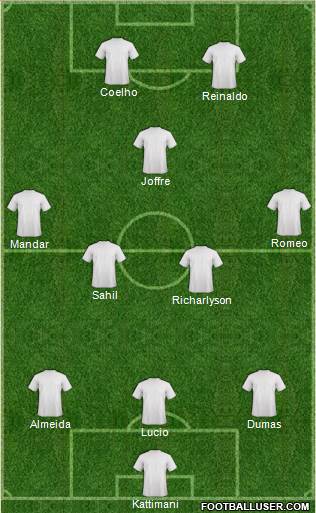 Pune, under the tutelage of former Atletico boss Antonio Lopes Habas, are yet to get their season up and running having suffered a loss against rivals Mumbai City FC in the Maharashtrian Derby. Their plans for the season took a major hit during pre-season when marquee signing and former Chelsea and Barcelona striker Eidur Gudjohnsen suffered an injury that ruled him out of this year’s ISL.

However the Stallions have roped in former Liverpool midfielder Mohammad Sissoko as a marquee replacement to the Iceland striker and will look to immediately bring him into action against Goa. Antonio Lopes Habas’ side will be expected to once again line-up in a 4-2-3-1 formation with Sissoko taking the place of Arias or Lucca in one of the defensive midfield positions. Pune will rely on the likes of Izumi to provide the goal-threat with the left-midfielder having scored 5 goals for Atletico last season.

Habas is still serving a touch-line suspension he received during last year’s semi-final against Chennaiyin and will have Miguel take charge on the field for the Maharashtrians. Pune do not have as glaringly long an injury list as that of Goa, which is why assistant coach Miguel believes that it is only a matter of time before his side open their accounts in this year’s competition.

Goa have serious injury worries plaguing their side at the moment and with the majority of them ruled out for the clash against a near full-strength Pune side, it’s difficult to see Zico’s men come away with a result in-front of their adoring fans at the Fatorda. Pune will be buoyed by the arrival of marquee signing of Sissoko which makes the task just that much more difficult for the Goans.