Queens Park Rangers: What Can Warnock’s Men Offer In The Premier League?

After a gruelling 46-game Championship season, Queens Park Rangers and Norwich City were rewarded with automatic promotion to the Promised Land of the English Premier League. It took Swansea City an extra three Play-Off games, but victory at Wembley meant their reward was the same.

The Hard Tackle will take a look at each of the promoted teams and assess what they need to do in order to survive in England’s top division.

First up, in our three-part series, are the champions…

Rangers, The Hoops, The R’s

Neil Warnock – Ex-Sheffield United and Crystal Palace manager, Warnock has plenty of experience managing in the English top flight. A controversial character, Warnock often speaks his mind in press interviews. He likes his team to be battlers, expecting no less than 100% effort from his teams.

Despite being 95% owned by a consortium consisting of mega-rich Formula 1 businessmen Bernie Ecclestone and Flavio Briatore and the world’s 8th richest man Lakshmi Mittal, the club finances are precarious, with investment in the playing squad minimal so far.

Formed in 1882, QPR won their only major trophy to date when they defeated West Bromwich Albion 3-2 in the 1967 League Cup final. But it was the 1970’s was QPR’s golden era. Players of the ilk of Rodney Marsh, Stan Bowles, Terry Venables and Gerry Francis, made Rangers an attractive side to watch. Under the guidance of Dave Sexton, who later went on to manage Manchester United, the Hoops finished the 1975-76 season in second place behind champions Liverpool. The following season, they reached the UEFA Cup quarter-finals in their first European adventure.

In the 1980’s, Rangers caused controversy by installing a ‘plastic’ pitch, which many felt gave them an unfair advantage in their home games. On the pitch, as a second division side, they reached the 1982 FA Cup final, losing to Tottenham Hotspur in a replay. Promotion to the First division followed, before another Wembley defeat to Oxford United in the 1986 League cup final. QPR were consistently mid-table in the first division, but did finish as high as 5th in 1988.

As the Premier League era kicked in, QPR were an established top flight side. With club legend Francis now boss, an exciting attacking team was assembled. Les Ferdinand was the star, a striker who was blessed with unbelievable pace and could score all kinds of goals. Supported by the likes of Andy Sinton, Andy Impey and veteran Ray Wilkins, another 5th placed finish confirmed them as London’s top club.

When Francis left for Spurs, Wilkins took over the reigns as player-manager. He guided the team to 8th, before the likes of Ferdinand and Sinton were snapped up by bigger clubs. In 1995-96, a poor season resulted in relegation. Fifteen years in the footballing wilderness even saw a spell in the English third tier in 2001, but now QPR are back where their fans feel they belong.

QPR were deservedly crowned Champions after heading the division for most of the season. Experienced manager Neil Warnock superbly blended a team of seasoned pro’s and young talent as ‘The Hoops’ took the division by storm. With goalkeeper Paddy Kenny and his defence superb, veteran Sean Derry patrolled the midfield alongside the impressive Alejandro Faurlin. Well-known winger Wayne Routledge provided pace and creativity, with strikers Heidar Helguson, Jamie Mackie and Tommy Smith all chipping in with important goals. But the player who took QPR to the next level was the magical Moroccan Adel Taarabt who, through his goals and unbelievable skill, provided numerous man-of-the-match displays. 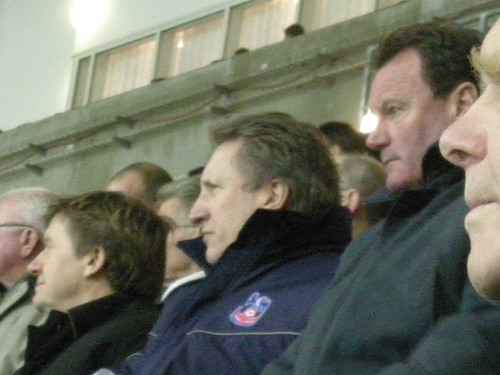 The outspoken Warnock is bound to add some spice in the league!

In what was a relatively straight forward campaign on the pitch, The R’s only promotion obstacle proved to be an FA investigation into the signing of Argentine midfielder Faurlin. If found guilty a points deduction was mooted, meaning when victory at Watford  made them champions, the celebrations weren’t able to start properly until a decision had been reached. But, an hour before the last game of the season, a home game versus Leeds United, the news came through that despite being found guilty on two out of 7 charges, they had escaped with only a fine. The title celebrations subsequently started at a packed Loftus Road, as the fans looked forward to a return to the top-flight after a 15-year absence.

Player of the Season:

Goalkeeper Paddy Kenny performed superbly in the Hoops goal, pulling off some incredible saves at vital stages of games. But, it was mercurial captain Adel Taarabt who was Rangers’ star player. Blessed with a great array of skills, ex-Tottenham player Taarabt now has an end product to his game, scoring 19 goals and providing 16 assists.

Performance of the Season:

The 2-0 win away at Watford which clinched the league title, was impressive due to the importance. But the best performance of the season came at Loftus Road on Boxing Day, as a rampant attacking display gave QPR a 4-0 win over Swansea City. Jamie Mackie and Heidar Helguson gave them an early lead, before Taarabt scored twice, one of which was a contender for goal of the season.

TheHardTackle’s Players To Watch Out For:

There is no doubt that the players key to QPR’s Premier League hopes are the two stars of the promotion campaign, Paddy Kenny and Adel Taarabt. Kenny, who has Premier League experience with Sheffield United, will need to be on top form as he faces some of the world’s best strikers. Despite fleeting appearances for Spurs, it will be Taarabt’s first real test of the Premier League. In the Championship, the Moroccan’s ability shone through despite other teams targeting the playmaker. Now facing top quality defenders, Taarabt will need to work hard to find the space needed to showcase his talent.

In order to gain promotion, manager Warnock assembled a team full of experience. Whilst the likes of Sean Derry, Tommy Smith, Rob Hulse and Heidar Helguson are all good Championship players, it is imperative that the QPR board allow their manager to improve the playing squad in order to stave off the threat of relegation. A strong commanding centre-half is needed, as most of the time the QPR defence will be under attack. In midfield, ex-Premier league player Jimmy Bullard has been heavily linked. His arrival would provide energy and creativity. The most important ingredient needed, though, is someone who can score goals on a regular basis. Out-of-favour Spurs striker, Robbie Keane, has been linked along with Blackpool forward DJ Campbell. Both would be welcome additions.

Tactically, Warnock will set his side out to be hard to beat; hoping the likes of Wayne Routledge and Taarabt can produce a moment of magic to get a victory. Backed by the home crowd, their form at Loftus Road will be vital, with points gained away from home a priceless bonus!

If the mega-rich owners give Warnock the necessary funds, QPR could possibly finish in mid-table. Without that though, too many hopes will be placed on the young shoulders of Taarabt, so one can forsee a struggle. Anything 17th or upwards will be considered success, but a 19th placed finish and a return to the Championship is what we predict.