The year was 1994. Real Madrid hadn’t won a league title for four long years. Adding to the pain, it was Barcelona who had dominated the Iberian nation for four continuous years from 1991 to 1994. Even more painful was the fact that Joann Cryuff was the one who had led Barca to the tremendous success on the pitch. Real Madrid had finished fourth the previous year and had little hope of stopping the monster created by Cryuff. But there had to be an end to the pain. Someone had to carry the club on their shoulders, someone had to bring back the glory days, and someone had to wipe the tears from the fans’ faces. After all, hope can never be lost. That hope was finally repaid when a certain Raul Gonzalez Blanco arrived – a modest boy raised like any other normal kid but with a hunger for success and a passion to play “The Beautiful Game”. He came as an angel, a breath of fresh air that would fill everyone’s hearts with joy. But most importantly, he bled white as history beckoned and destiny waited for ‘El Siete’.

Two years before he made his debut for Real Madrid, the Atletico Madrid fans had no idea that they would lose a pearl to their bitter neighboring foes. Raul played for Atletico’s youth team until 1992, but since the then Atleti president Jesus Gil decided to disband the youth system in a measure to cut costs, Raul was picked up by Real Madrid. As a fifteen year old, he continued his development and the urge to improve his skills to play at the highest level, in front of the most demanding fans, for a club where stability is as squat as water in a desert. It didn’t take too long for Raul to persuade the bosses at Real that he had a case to play for the first team. Jorge Valdano, the manager of Real Madrid in 1994 decided to give the young 17-year old a chance on October 29th, a match that took place at the intimidating La Romereda. Raul played but failed to make an impact. But Valdano knew it was not too long before Raul could make his mark. And he was right! A week later, Raul scored his first goal for Real Madrid against Real’s rivals, ironically, his boyhood club Atletico. Raul completed his first season with the La Liga crown and scored 10 goals for Real Madrid helping break Barcelona’s hegemony.

Although he had made his mark for the Blancos, he was not selected by Javier Clemente for the Euros in 1996. Spain failed to get past the quarterfinals losing to England. Soon after the tournament, Raul made his first international debut in a game against the Czechs in October 1996. It wasn’t long before Raul started to show what a gifted footballer he was, as he started scoring goals left, right and center for both club and country. Over the first 5 years of his career, Raul managed to score a total of 125 goals for Real and 15 goals for the La Furia Roja.

But he still awaited his first Champions League medal, a competition in which Real had then won a record six times. But, the last time they had won was 32 years back in 1966 when Raul was not even born. Real had previously made only one genuine attempt in 1981 to regain their crown but had eventually lost to an Alan Kennedy inspired Liverpool. They faced the mighty Juventus in the final and won. Although Mijatovic stole the headlines by scoring a dramatic winner close to full time, Raul had played his role in Madrid’s clinch of the trophy for a record seventh time. Later that year, in the final of the Intercontinental cup, Raul inspired Real and scored a wonder goal against Brazilian club Vasco Da Gama. He was deservedly named Man of the Match for his brilliant performance.

That was not all as there was still plenty to come from ‘El Angel De Madrid’.

Like the Sun burns brightest at noon, Raul’s career started to truly blaze in his mid-twenties. By the start of the millennium, Raul had won everything at Real Madrid. But, that didn’t stop him from being hungry for more and it was since 2000 that Raul truly etched his name in household football fans’ hearts all around the world.

Following a disappointing La Liga campaign in 2000 that eventually saw Real Madrid finish fifth, they were looking to regain their European trophy in the final in Paris against Valencia. Real won the game 3-0 in what was a very one-sided final, and Raul had scored a fantastic goal. He had made it 3-0 for Real when he had raced on to cover more than half the pitch to score one of the greatest goals in a Champions League final – the perfect cherry on top of a very delicious cake, and thus etching his name in the Champions League record books. 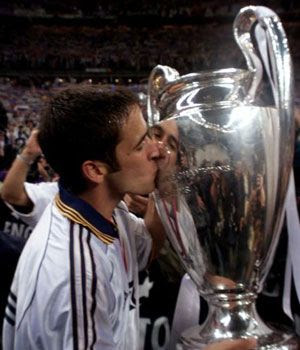 Raul kisses the UCL trophy after winning it in 2000.

‘El Capitan’s’ influence on Real Madrid continued as he aided them to their 28th Liga crown in 2001 under the guidance of Vicente Del Bosque. By that time, Florentino Perez was the Real Madrid president and had acquired Galacticos like Figo and Zidane. Although the Madridistas loved to watch the great Figo and Zidane, their heart always beat for Raul, the ‘darling’ that he was to the fans. It had always been that way ever since that day at the Camp Nou. In 1999, the Classico at the cules’ backyard was a ferocious game of football in which both Real and Barca had plenty of chances. But it was the Catalans who were leading 2-1 and heading for a win. In the dying minutes of the game though, Raul got behind the defenders to score an equalizer. He celebrated that goal by lifting his index finger to his pursed lips – a gesture that suggested silencing the noisy cules, which well and truly confirmed his allegiances and loyalty for Madrid. That moment still remains as the favorite Raul moment for many Madridistas worldwide. 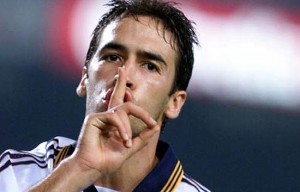 With the help of the Galacticos, Raul lifted his third Champions League trophy in 2002, scoring again in a Champions League final. The following year he was sensational against Manchester United in the quarterfinals. In the first leg at the Bernabeu, Raul was unstoppable as he scored two truly wonderful goals and brought out the admirer in Sir Alex Ferguson who couldn’t stop praising Raul’s performance. Before the second leg, he even declared that Raul was the best player in the world adding another feather to Raul’s already gleaming cap. Raul became a phenomenon in Europe. Today, he is the top scorer in the Champions League with an astonishing 66 goals.

After 2003, Raul’s form started to decline and so did Madrid’s supremacy in European football, which was no coincidence as he was undoubtedly the heart and soul of the “White House”. Although Real struggled to win trophies, Raul’s commitment and desire to win more never ended. He carried the club on his shoulders even in the darkest hours of Real’s history, notably in the mid-2000s. His persistence was rewarded in 2007 when Real won its first trophy after three long years. Raul had become emotional and erupted in joy when they won the league at the Bernabeu after a long and dramatic season. One could watch the innocent kid in Raul that night, as he jumped and shouted and slid all over the pitch to celebrate the title with his fans and teammates.

An emotional Raul at the farewell of his Real Madrid departure.

But for all his achievements and success for Real Madrid, he was unfortunate not to accomplish anything significant for his country. Not that he didn’t do his best, just that there wasn’t enough support for him to take his country to the highest level. But, he still remains the top scorer of the National team – 44 goals in 102 appearances. Before Spain travelled to Austria and Switzerland for the Euro 2008, there were demands to include Raul in the National team but Aragones was content with his young squad. Spain went onto win the Euro 2008 and two years later made history by winning the World Cup in South Africa. But one could feel that something was missing, that there was a void, that if Raul was there with Spain in South Africa to lift the biggest trophy in football, the whole Iberian nation would’ve enjoyed it that little bit more, that the whole world would’ve been glad to see one of the greatest footballers of all time achieve what would’ve been a deserved accomplishment.

A record goal scorer (a record total of 325 goals for Real Madrid) in possibly every competition, Raul will always remain in all the football lovers’ hearts. Here’s a salute to a glorious footballer, a fantastic human being, and a legend that people will never forget.