The year 2010 has been a spectacular year for football fans all over the world. The FIFA World Cup might have been boring in terms of the football played but surely did produce some memorable moments. So did the Champions League and the top leagues over the world. Some breath-taking goals were scored, some great individual performances were witnessed, and some memorable team performances left the spectators wanting for more. It’s very difficult to pick out ten unforgettable moments from a truly memorable year; yet, here are TheHardTackle’s Top Ten.

As Andres iniesta scored the winning goal against Holland in the WC finals, he reminded us of the emotional aspect associated with football as well. With the entire world watching and chanting his name, Iniesta lifted his shirt and revealed the words written ‘Dani Jarque- siempre con nosotros’ (Dani Jarque-Always with us). It was a tribute to his Spanish youth teammate and Espanyol captain Dani Jarque, who had passed away in August 2009, and it was even more touching as Iniesta chose the most unforgettable moment in Spanish football history to pay tribute to his friend. The celebration is undoubtedly unforgettable as the goal itself. An endearing gesture from an equally endearing footballer. R.I.P Dani Jarque.

The Most Beautiful Defeat of My Life

Internazionale had beaten Barcelona 3-1 in the first leg of the Champions League semi-final at San Siro. The second leg at Camp Nou produced a contest that will be remembered by the fans for years to come. Be it the histrionics of Sergio Busquets, the audacity of Mourinho as he whispered something to Pep as he was talking to Ibrahimovic, the sprinklers incident, Valdes’  lunge on Mourinho, this match was full of intense drama. Barcelona needed 2 goals to go through and play in the final at the Estadio Santiago Bernabéu. The home team just managed to breach Inter’s fort once through Gerard Pique in the second half. Inter Milan produced a defensive master class, which some termed as ‘anti-football’. When the final whistle was blown, Barça were knocked out, despite winning the game, on aggregate and José Mourinho charged down the pitch to celebrate with his players and fans, pointing his finger to the heavens. In the post match conference, Mourinho said, “It’s the most beautiful defeat of my life….. It’s tough with 11 players against Barcelona – with 10 it’s a historic feat.”

Arsenal had drawn their first leg encounter against Barcelona at the Emirates and Bendter had scored early in the first half to give a one goal lead to Arsenal at the Camp Nou. Then something spectacular unfolded. Lionel messi produced a breathtaking display of football, scoring a hattrick in just 21 minutes which prompted Arsene Wenger to say “He made the impossible possible… He’s like a PlayStation.” It was a display of absolute genius and needless to say, Messi managed to score another goal later on and take home the match ball. This was the best individual performance by a football player in the year 2010. The young German team had run England ragged in the pre-quarter-final game of the World Cup. The first half was still not over, and they had raced to a 2-0 lead. England tried to get back into the game, and reduced the deficit to one goal through Upson. What followed was one of the most controversial calls in the world cup. Frank Lampard spotted Neuer standing further off his goal line, and tried his luck from long range. The ball hit the inside of the post, and bounced inside the goal-line – it was a clear goal. But to everyone’s horror, the referee waved ‘play on’, and thereby robbed the English team of a well-deserved equaliser. The replays on giant screen validated the goal, and the crowd broke into a crescendo of jeers. It’s quite difficult to speculate on what could have happened had the referee not done a blunder of such monumental proportions. England’s disappointing campaign came to an end after match, but this incident left a bitter taste in the mouth.

The Hand of Devil

In the dying moments of the World Cup quarterfinal, as Dominic Adiyiah headed the ball and the entire African continent waited with bated breath for the ball to cross the line, Luiz Suarez decided to become the goal keeper. He was subsequently sent off and Asamoah Gyan stepped up to take the most important penalty in Ghana’s footballing history. He missed the penalty in the final few seconds of extra-time and Uruguay eventually won the match 4-2 on penalties. After the match, Suarez declared “The hand of God belongs to me….I made the best save of the tournament”. But the Ghanaian boss described the save as “the hand of devil”. Surely, this was the heartbreak of the year. Even more disgusting was Suarez’s celebration at the touchline after Gyan missed the penalty and his comments thereafter.

The French chose the biggest stage of all to humiliate themselves. After Nicolas Anelka hurled invectives at Domenech and was subsequently sent home, the entire team revolted against the coach and the federation, refusing to train. The most telling image of this was the video which showed the French captain Patrice Evra walking away after an argument with the fitness coach Robert Duverne who threw his accreditation badge before leaving the field, and the players withdrawing to the team bus. Domenech had to separate Evra and Duverne. This was indeed the shameful moment of the year.

The Name is Bale, Gareth Bale

Internazionale had scored four goals in the first half itself in the Champions’ league group match against Tottenham Hotspurs. At half time, it seemed Inter would win the match comfortably. But, Gareth bale seemed to have other ideas as he scored a sensational hat trick at the San Siro, reducing supposedly the best right back in the world, Maicon, to a joke. The first goal was a superb individual run which ended with an equally incredible finish. The second goal was a replica of the first one. He didn’t stop there, as he again murdered Maicon and the Inter defence with two spectacular assists to set up a famous Spurs win against the European champions at the White Hart Lane. Truly, an unforgettable performance.

Manchester United were 3-0 up against Bayern Munich in the Champions League quarter-final and were leading with an aggregate of 4-2. They were almost certain to process to the final. Then Bayern managed to pull one back in the 43rd minute courtesy an Olic strike. But still, united looked strong enough to hold off Bayern until the 73rd minute. In a moment of madness, Rafael brought down Frank Ribery and was sent off, reducing United to ten men. And then Arjen Robben produced a moment of magic as he hit a glorious volley in the 74th minute to knock United out of the Champions League, on away goals.

The Kings of Europe

It was termed as a battle between the mentor Van Gaal and the disciple Jose Mourinho, and it ended in favor of  the disciple. A Diego Milito brace helped Inter beat Bayern Munich 2-0 in the final of the Champions league. The Nerrazzuri went down in history as the first Italian club to have claimed the historic treble with the Champions League, Serie A and the Copa Italia and Jose Mourinho became only the third man after Ernst Happel and Ottmar Hitzfeld to have won the European Cup with two different clubs. 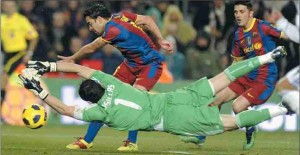 As El Clasico’s scheduled date approached, the entire world anxiously waited to watch the most awaited clash of the year. It was not just a football derby but a clash between supposedly the best teams on the planet, the best coaches and the best players. Instead it turned to be a footballing masterclass from FC Barcelona. The Catalans demolished Los Galacticos 5-0. Florentino Perez described the loss as the worst in the history of Real Madrid,  thus underscoring the magnitude of the result.

If you think we have missed out on any other equally remarkable footballing moment of 2010, please use the comments section.

Happy New Year to all our readers. Have a wonderful 2011.