Leicester City will aim to get their first win in the UEFA Europa League this season when they face Legia Warsaw at Stadion Wojska Polskiego.

Matchday 2 of the 2021/22 UEFA Europa League group stage is set to take place on Thursday, with all the matches on show on the day, as always. Leicester City will be in action in the early slot, as they lock horns with Legia Warsaw at Stadion Wojska Polskiego,

Legia Warsaw started their UEFA Europa League campaign with a 1-0 win over Spartak Moscow, in a result that has taken them to the top of the Group C standings. However, in domestic football, things have not been easy for the Wojskowi, who have managed just nine points in seven games to sit 15th on the Ekstraklasa table.

Leicester City, on the other hand, have been far from their fluent best at the onset of the season, managing just two wins in the Premier League to be tottering at 13th on the table. In Europa League, the Foxes started off with a 2-2 draw with Napoli, as the squandered a two-goal lead to share a point with the Partenopei.

Thursday’s clash will be the first instance when Legia Warsaw and Leicester City will face off against each other and ahead of their maiden meeting, The Hard Tackle takes a closer look at the encounter.

?️ Czesław Michniewicz: I really value Brendan Rodgers. We, as a coaching staff, were following @LCFC assistants' cue a little bit. For instance, they used drones in England first, we did it in Poland.

Czeslaw Michniewicz has a number of fitness issues hampering his preparations ahead of the visit of Leicester City. On Thursday, the Legia Warsaw manager will be bereft of the services of as many as four first-team players.

Bartosz Kaputska is recovering from a long-term knee injury while the likes of Artur Boruc, Mattias Johansson and Luquinhas are all battling to regain match fitness. In the absence of Boruc, Cezary Miszta is a certainty in goal for Legia Warsaw, who ought to line up in a 4-3-2-1 formation against Leicester.

At the heart of the Legia Warsaw defence, Mateusz Wieteska and Maik Nawrocki are expected to pair up and forge a solid partnership. The duo will be flanked by the full-back pairing of Filip Mladenovic and captain Artur Jedrzejczyk.

Up ahead in midfield, the onus will be on Bartosz Slisz to keep things tight and keep a lid on the output of James Maddison, with Josue and Andre Martins providing the defensive support. As for the attacking unit, Mahir Emreli will lead the line for Legia Warsaw against Leicester, with creative support coming from Rafa Lopes and Ernest Muci. 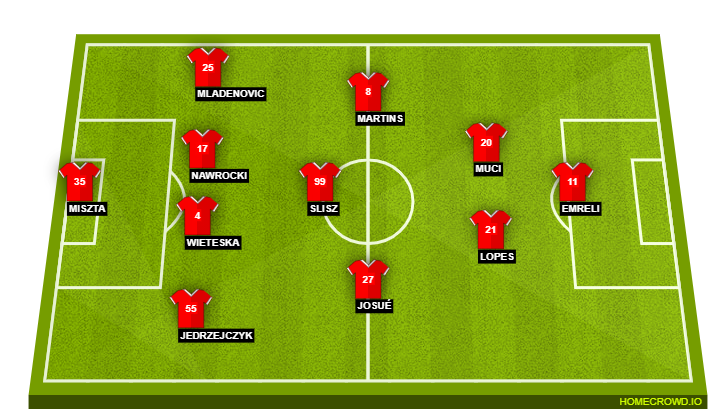 Unlike his counterpart in the Legia Warsaw dugout, Brendan Rodgers has a number of roster issues to contend with ahead of the trip to Stadion Wojska Polskiego. On Thursday, the Leicester City boss will have to make do without six first-team players.

The major absentee for the visitors is Wilfred Ndidi, who is suspended after being sent off against Napoli. In addition, Jonny Evans is struggling with a fitness issue and will play no part versus Legia Warsaw while Kelechi Iheanacho is unavailable due to a documentation issue that has forced him to miss the trip to Poland.

The remaining absentees for Leicester are James Justin (knee), Wesley Fofana (leg) and Nampalys Mendy (groin). The absence of Mendy, in particular, means Boubakary Soumare is a certainty to start in the midfield double pivot alongside Youri Tielemans, with the duo looking to stifle Legia Warsaw during their forward movement.

At the back, Caglar Soyuncu and Jannik Vestergaard pick themselves in the central defensive partnership, with Timothy Castagne and Ryan Bertrand certainties out wide as the two full-backs. In goal, there is no looking past Kasper Schmeichel.

As for the attacking unit, James Maddison will be the creator-in-chief for Leicester, looking to pull the strings higher up the pitch, with Ademola Lookman and Harvey Barnes being the two wide men. Finally, Patson Daka will lead the line for Leicester in the absence of Iheanacho, with Jamie Vardy due a rest. 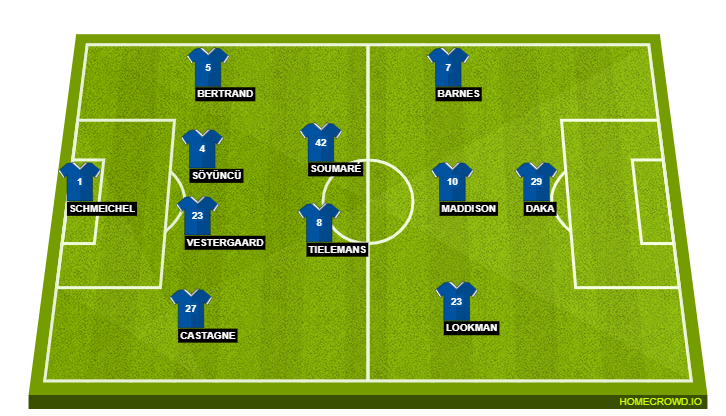 Coming to Leicester City on the back of a stunning campaign with Red Bull Salzburg, the expectations were invariably high from Daka, especially after the Foxes beat some of the biggest clubs in Europe to secure his services. However, the 22-year-old is yet to hit the ground running, with Brendan Rodgers easing him in to the thick of the action instead.

The game against Legia Warsaw, though, provides Daka with the chance to prove why he needs to be handed more game-time, especially in the Premier League. With Kelechi Iheanacho unavailable, the Zambian striker has the chance of playing nearly the entire game without an impediment. A big game beckons for Daka this Thursday.

Neither Legia Warsaw nor Leicester City carry a lot of solid form heading into their maiden meeting on Thursday. However, with each of their defensive units being rather vulnerable, one can expect a few goals from this game, especially from a purposeful Patson Daka, who will likely be on the score sheet in this game, possibly even sealing the points for Leicester City in a 2-1 win.