Aaron Wan-Bissaka and Fred will return while Luke Shaw will be in contention to feature when Manchester United face Everton on Saturday.

Manchester United will aim to build on their midweek UEFA Champions League win when they play hosts to Everton at Old Trafford on Saturday afternoon. And Ole Gunnar Solskjaer has been handed a major boost on the team news front ahead of his team’s latest fixture.

Luke Shaw is inching closer to his return after a short layoff with a knock. However, the English international is recovering from an illness which makes his availability on Saturday as touch and go. However, Harry Maguire continues to miss out with a calf injury while Amad Diallo (hamstring) and Marcus Rashford (shoulder) are sidelined as well.

During his pre-match press conference as well as a separate interview, Solskjaer provided an update on Shaw and Rashford, saying, “Luke feels better in himself. He’s been ill but he’s still got the shoulder injury.”

“We’ve got to make a decision on him. Marcus trained fully for the first time today with contact. There were a few tackles flying in on him and he seemed okay, which was nice to see. Marcus is fit, he’s worked really hard, but he’s not had any contact [until now]. If his shoulder can take the contact now, he should be ready after the internationals.”

Shaw’s iffy situation means Alex Telles could be in line for a second successive start. The Brazilian defender would be in buoyant mood after scoring in the come-from-behind 2-1 win over Villarreal. On the opposite flank, though, Diogo Dalot is unlikely to retain his spot, especially with Aaron Wan-Bissaka available again, but also because he was dreadful in the midweek game.

At the heart of the Manchester United defence, Victor Lindelof will once again pair up with Raphael Varane in the absence of Harry Maguire while in goal, there is no looking past David de Gea. Up ahead in midfield, Fred is expected to be recalled, with the Brazilian lining up alongside Scott McTominay. 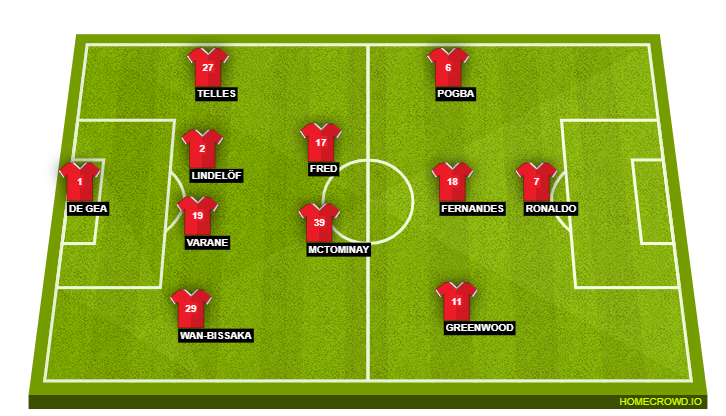 Fred’s return in the double pivot means Paul Pogba will move into the more advanced left wing berth, with Jadon Sancho dropping down to the bench. On the opposite flank, Mason Greenwood is a certainty, as is Bruno Fernandes in the no. 10 role. Finally, Cristiano Ronaldo will once again lead the line for Manchester United against Everton.